In America, being “cool” often means going against the grain of popular culture. That is, as long as enough other people agree with you. More difficult is to reject the prevailing ethos and stand alone.

Those who do become leaders.

Blake Guichet grew up in Louisiana—the place her entire family calls “home.” Every year during the first cold snap, she makes a delicious gumbo (which she admits is a bit stereotypical). Her husband makes a mean crawfish boil and has been doing so since he was ten years old.

As a child, Guichet went to church regularly, but resisted going “all in” with her faith until she was in college. “I was going to say I was very hard-headed, but I still am,” she laughs.

In her high school years, Guichet says she believed, but had a lot of questions for God. Hurricane Katrina hit New Orleans when she was twelve years old. She remembers being trapped at home for a month, listening to the radio as people drowned and others lost everything but their lives. The suffering left an impression.

She attended Louisiana State University on a very good scholarship, but quickly found herself in party mode. In fact, she spent so much time partying, she almost lost her scholarship.

Then one morning Guichet woke up in her boyfriend’s dorm filled with “unprovoked anxiety” and quickly left. On her way home, she sat down in the middle of the LSU campus and had an experience with God.

She believes God told her that was enough… that he had bigger plans for her life. It changed her direction.

From that day on, she says, God was an active part of her life. But that does not mean her life is without suffering.

At thirteen months, Guichet’s daughter had a forty-five-minute seizure. To stop it, emergency medical teams nearly overdosed the girl. Doctors were not sure if she would recover or what kind of damage the drugs caused.

While waiting in the hallway, Guichet recalls the moment as one of “life-altering clarity.”

“I remember thinking nothing will ever be the same. My entire perspective shifted in that moment.” Her daughter recovered with only a slight speech delay. “She’s incredible, bright, thriving, and wonderful. She’s an actual miracle,” Guichet says thoughtfully.

About a year later, Guichet began to experience severe anxiety and panic attacks. She wondered why she was able to trust God through almost losing a child and then have to experience anxiety, too. But instead of moving away from God, as many do, she chose to express her anxiety to God. “I grapple with God a lot. Even if I’m struggling, he and I are going to duke it out.”

The path of wrestling with God is well-worn throughout history. Guichet finds inspiration for doing so in the biblical character of David. He is credited with writing some of the most intense and emotional poems in the Bible.

“I think David was depressed,” says Guichet. “If David can ask questions and have doubts, then we can, too.”

Guichet is on a mission to help Christians experiencing similar moments of weakness, and believes the “Weakness is not an option” idea is actually a lie people—including herself—succumb to. Citing her boisterous personality, Guichet once supposed she didn’t have any weakness. “But if I don’t have any weakness, I don’t have anything to boast in,” she says, referring to 2 Corinthians 12:9, a passage about experiencing God’s power through human weakness. Now, Guichet chooses instead to embrace her weakness. 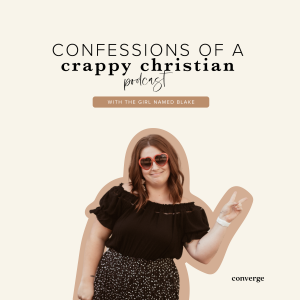 Another lie she believes many people come to accept is around the “hustle culture”—that hard work will give you everything you want.

“I’m a very hard worker. I would not be where I am today if I were not an extremely hard worker. But I don’t believe this hard work is going to fulfill me or make me happy or give me what I want or change God’s plan for my life,” she muses.

Today, Guichet works for her local church as communications director. She also hosts the Confessions of a Crappy Christian podcast which focuses on uncomfortable topics. “It was one of those things where I couldn’t find it, so I created it,” she says of the show’s impetus.

“We do a lot of unpopular opinions,” she confesses.

Often, her most controversial opinions are those that attempt to bring some nuance to issues by trying to see both sides. That’s not a popular take in a cancel-culture society. “The countercultural aspect is very intentional,” explains Guichet.

“There is a massive number of women looking for a safe place to talk about things that don’t get talked about enough,” she says.

Guichet is building a movement of people willing to embrace their weakness so they can see God’s strength. It’s a unique challenge and calling, and tremendously cool.

How ‘Superhero Perseverance’ Led Paul Vogelzang To ‘Not Old, But Better.’

Under The Radar: Other People's Shoes