“I grew up in a family that is very focused on being there for people as a career,” explained Noam Weissman.

The second of four children, Weissman had a long-standing example of community engagement and service to live up to. His father is a clinical psychologist, and his mother works in the inner city of Baltimore, Maryland. His brother, Chanan Weissman, serves as President Biden’s liaison to the Jewish community.

Serving as a career is simply part of his family’s life.

That was not always his desire, however. Before discovering how much he loved education, Weissman wanted to become a corporate lawyer in Manhattan. Looking back, though, he sees that education was a much better fit.

“We don’t know where we’re going. We have no idea. Then, we see the end of the story, and the different blocks start to make sense,” he reflected.

For Weissman, education as a career path began to make sense when he saw its transformative power. He recalls teaching the Talmud to seventeen-year-olds. The class was discussing whether redemption or repentance comes first—a subject theologians of many faiths have argued over for millennia.

One student, who was not “one of the cool kids,” became passionate about the subject. She even got “fiery,” Weissman said, while studying the text and making connections with others. Soon, the whole class engaged and was learning. “Passion is contagious,” Weissman explained.

That’s one reason Weissman believes the concept of “havruta” is valuable. He calls it “one of the great contributions to society from the Jewish community. It is a magnificent feature of Jewish experience,” he said with a smile.

As he described it, havruta is a conversation that can sometimes be intense. “The concept is two people studying together for the purpose of sharpening the other person’s ideas in order to arrive at truth,” he clarified. It’s not a marriage, but the relationship is intimate enough that breaking up with your havruta can be painful.

The commitment to finding the truth is what unifies the partners, even when their views on a subject are widely divergent. It also teaches humility, the ability to listen, and forgiveness, which Weissman believes is lacking in a culture known for canceling one another.

“Passionate disagreement should never come at the expense of empathy,” he advised. “There are three things that remove people from this world: jealousy, desire, and pride,” he uttered first in Hebrew before translating it to English. “You cannot think clearly when you are thinking in that way.”

That’s why Weisman’s goal is to “try to help elevate the conversation for the next generation.” His work with OpenDor Media means making content that provokes thought and empathy based on Jewish faith.

At a time when many believe ancient religions no longer have much to say to us, Weissman begs to differ. “It’s our job to unearth how it’s relevant today. When we don’t do that, it’s at our own expense,” he said. 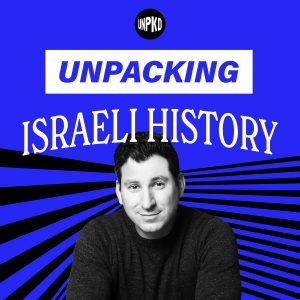 While the technology may be different, today’s students wrestle with the same questions people have for thousands of years. They want to feel connected to others and valuable. “The Jewish religion, the texts, and the Talmud have so much wisdom about these issues,” Weissman said.

Unwilling to accept what the text says uncritically, he adds, “Does it also say things that you might disagree with? Of course it does!”

Weissman hopes that podcasts he creates like The Power Of _______ where he explores how Jewish faith is relevant today, will help younger generations in the same way his lecture affected the student mentioned above. And his show Unpacking Israeli History looks at controversial events in Israel’s history form multiple angles.

After seeing one of OpenDor’s films, that student exclaimed, “This is the first time I don’t feel alone!”

Even though he is making such a difference, Weissman doesn’t see his service as anything special. “It’s just what you do. You’re supposed to be there for other people… to be a good citizen of this world,” he humbly reflected.

Such is the power of new media without a gatekeeper. “There is nobody, now, standing between people teaching ideas and people listening to ideas,” he said. Weissman is able to speak directly to his audience without filters, a concept that he acknowledges is a power to be used wisely. “Everything in the world is neutral. The question is, how do we use it to our benefit?”

Weissman serves others with an eye toward making the world a better place for everyone.

“Education is the beating heart of the world,” he said. “It’s really hard to overstress how important a good education is to living a meaningful knowledgeable life,” he opined.