One of the many wonderful things about the world of history is that there’s always something new to discover. There’s a battle, a new movement, or a personality one might not have come across before. Even the most avid of history podcast fans will stumble across a little-explored corner of the world to delight them.

One such corner would be the country of Georgia… a place that presumably flies under most people’s historical radars.

Cuban-American Roberto Toro wants to right this wrong. His interest in Georgia started while studying abroad in Russia. There, he was introduced to the culture and the food of this small Caucasian state. Basically, eating at a Georgian restaurant once or twice a week fed not only his appetite, but also his interest in the country.

“The restaurant was next to the school, so it was very hard to not eat Georgian food, and for cheap. Then, I went to Georgia for four days, because I made a friend at school. They invited me over during the holidays to visit their country, and I completely fell in love. I thought it was great.”

Roberto walked around the capital, Tiblisi, as well as the former capital, Mtskheta, for four days, soaking up the sights. “I came back from studying abroad and completely forgot about my time in Georgia. Well, I forgot about the country, but still had a longing for Georgian food and wine!”

Fast forward to 2020, and COVID-19 left Roberto with time on his hands. So, he started listening to podcasts—Robin Piersson’s History of Byzantium being foremost on the list. Roberto was surprised by how often Georgia was mentioned in the retelling of the history of the Eastern Roman Empire.

“I was like, ‘Oh wait… I want to know more about that place, because I’ve been there.’ So, I looked for a podcast on Georgia, but nothing showed up. Eventually, after a few months of no luck, I figured I already have some books on its history and culture, so why not do it myself? One thing led to another, and I got myself a mic and a nice setup. I created The History Of Saqartvelo Georgia, and it’s been running for over a year now. I’m really happy with the content we’re producing.” 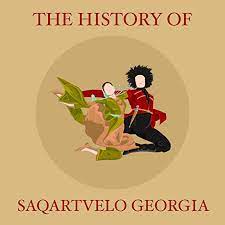 The history the podcast explores is wrapped up in geography and religion, because Saqartvelo sits at the crossroads of Europe and Asia. The Zoroastrianism, Christian, and Islam faiths have played a part in forging the nation over 2000 years, as have the Bzyantines, Russians, Mongols, Romans, Turks, Persians, Armenians, and many other nations. This is a testament to its geographical position on the fault line of so many different large countries and cultures.

When asked about the existential adversaries of the Georgian people, Roberto answered simply: “Everyone, honestly. Everyone has done something to Georgia. Georgians are very proud of the fact that they’ve survived several occupations, successfully holding onto their identity throughout.”

So unique is the nation that it has its own alphabet, and its language isn’t related to other Indo-European language groups. Georgian doesn’t take much from other languages other than Persian and some ‘loaned’ words from Greek and Russian. “There’s nothing that really compares to it,” Roberto proudly expressed.

Like any good podcaster, Roberto reads a lot to create his episodes. “I read a great deal of Georgian history—books, articles, and papers on Academia, which accesses academic journals and JSTOR, the digital library of journals, books, and primary sources. The last group of episodes about King Marion III took me a weekend to capture all of the notes, but the actual writing takes a little longer, because I want to create a clear narrative.”

Like many of the former states of the Soviet Union, Georgia is proudly displaying its national character, customs, and history as an independent state. It’s only fitting, therefore, to have its own podcast to go along with its assertion of sovereignty!