The interview with Alexander von Sternberg for this article ranged far and wide across history and podcasting as he has firmly held and interesting opinions on both. This conversation illuminates how Alexander thinks and serves as a valuable insight into his interests and how these feed his podcast, History Impossible.

The podcast itself is not just about the Second World War, though that is a major theme that crops up again and again, especially now that he has completed a deep dive series into the Muslim Nazis, as he styles them. This series is a good example of what Alexander means in the title of the podcast and its accompanying tagline: History: Impossible is exactly what it sounds like: impossible history. People, events, ideologies, STORIES—all that sound impossible. But all true. i.e. the listener might say to themselves, “Muslim Nazis??? Surely that’s impossible!” But over five episodes Alexander tells of Hajj Amin al-Husseini, a man Alexander describes as the Palestinian Littlefinger (the Machiavellian character in Game of Thrones), who tried to ally with the Nazis during WWII joined by a common hatred of the Jews.

With some episodes lasting over three hours, this really is a deep dive reminiscent of Dan Carlin in approach. In fact, Alexander does often homage Dan Carlin as being a major inspiration for him and one of the chief reasons that he became a history podcaster himself.

Alexander chanced his arm at various podcasts, including working on a video game podcast and doing a pop culture podcast with a friend but he found himself listening almost exclusively to history podcasts and so this was the natural genre for him to do when he decided to have another shot at podcasting.

Another podcaster who has been a big supporter of Alexander’s is Daniele Bolelli of the immensely popular History on Fire podcast who advised him to start with one-off episodes and then eventually work his way up to the big multi-episode series that he specializes in now.

The conversation, like the podcast itself, was largely focused on The Second World War and though this war is the subject of so many podcasts, Alexander feels he has something to add and he certainly does.

As well as the series on Muslim Nazis, Alexander has also covered less well-examined areas of the war, such as the American soldiers who liberated Dachau and swore revenge, in The American Avengers (Vengeance) episode or The Werewolves of the Fourth Reich that delves into, not only the fascination with the super-natural that was part of the Nazi ideology, but also into stories of the people who tried to carry on the war after the surrender of Germany, often driven by these strange beliefs in the occult. 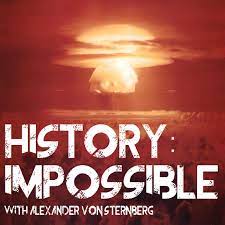 This is where Alexander uncovered the difference between Hitler and other Nazis, he says, “He (Hitler) was very practical. He was very worldly in the sense that he was just concerned about whatever would allow him the fastest and most secure avenue to power. But then when you start looking into the, sort of underlings to Hitler, specifically, people like Heinrich Himmler, Alfred Rosenberg, Gottlob Berger—these are figures high up in the Nazi hierarchy who are very interested in the Occult.”

Though his surname does make him sound like a German General from the Prussian Juncker class (having a “von” in your name, in Germany, generally means you have at least some link to the nobility), Alexander tells us that von Sternberg is a made-up name adopted by his German Jewish ancestor, when he arrived at Ellis Island, probably in an attempt to hide his Jewishness in an antisemitic age. So, far from being related to a German General, Alexander’s Grandfather had been a gunner in a B17 and was shot down over Germany and ended up spending the last year of the war in a Prisoner-of-War camp, where fortunately for him, his guards never found out that he was half Jewish, though this did not prevent him from being put on starvation rations and him losing half his bodyweight. This personal connection to the war is one of the reasons it is such an interest of Alexander’s.

Key to History Impossible is also the way that Alexander makes links between the past and our own time. His recent interview with Kristaps Andrejsons of the Eastern Border podcast is a great example of this as they discuss the current Russo-Ukrainian War and place it in the wider context of the history of the region.

Alexander’s passion to educate really shines through in the interview. He cites a statistic from the Washington Post that around two thirds of young Americans don’t know what the Holocaust is.

“And that speaks to a historical illiteracy that, in so many ways that really frustrates me. And obviously…, that’s partly why so many of us in the history podcasting space do what we do, but I think it’s also just because we want to tell stories, but it’s also, so we can make it a little more palatable to learn about history.”

This kind of aversion to learning is not confined to the US as Alexander also tells of a British Reality TV or Tik-Tok star who wondered why we would want to learn about the Holocaust as we anxious and depressed enough as it is.

And fortunately for this mission to educate, History Impossible is obviously doing very well as a podcast, as it deserves to be. Alexander is planning to go full time on podcasting “because you know, my current day job is just not doing its job—paying the bills.” and with a healthy roster and nearing 200 reviews on Apple Podcasts, he does look set to make it a success.