Southern Gothic isn’t your typical history podcast. In fact, I’d argue there isn’t anything typical about it.

The idea behind it isn’t to just entertain or educate, but to completely enthrall you through music, sound, and story depth. Its goal is to take you on a journey—to physically take your hand and walk you into a world.

Brandon Schexnayder, co-founder and host believes, “Podcasting, as a medium, could be doing so much more to enthrall the listener. Podcasting is this ‘canvas,’ but we’re still just drawing sketches on it.”

Before embracing podcasting, Brandon grew up steeped in such a love of audio that he left New Orleans at 17 to pursue audio engineering in TN—home to Elvis, Hank Williams, Jr, and the Oak Ridge Boys.

While audio engineering was on his mind, New Orleans was in his blood.

Known for its offbeat, eccentric, and colorful culture, many believe that New Orleans is among the most haunted places in the United States. Brandon and his best friend, sister, and co-host of Southern Gothic Bryanne grew up there, and were highly influenced by its dark and energetic stories.

Unlike Brandon, Bryanne remains in Louisiana and is an archivist for the State of Louisiana Museum. She loves research and can get lost for hours in it finding the ‘perfect’ details. Her penchant for doing deep research is what drives Southern Gothic.

While honing his craft in Nashville, Brandon realized that his favorite podcasts were just scraping the surface of what’s possible with audio. He wanted to use his craft to break that barrier… to help a listener be truly immersed in a story.

He and Bryanne were determined to bring alive the stories they had grown up with. Even more importantly, they wanted to tell these “ghost stories” in a way no one ever had before. However, Bryanne’s background in research and the museum kept her from appreciating haunted history stories the way they are told on tourist wagons. She didn’t like the half-truths and embellishments so common to them. Instead, she wanted to deconstruct the legends, and really understand how they started and evolved. 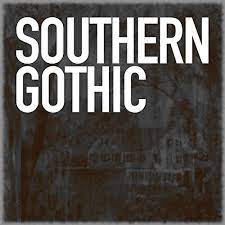 Brandon says, “Local oral history is like a game of telephone.” Over the years, the original details get embellished and changed, and crucial pieces disappear. So, Brandon and Bryanne trace the stories to their roots, and research the context.

Brandon’s work in Nashville ended up being a lot more than just audio engineering. He gleaned a great deal of storytelling methods from the songwriters he worked with on Music Row. Hearing them weave together narratives, taking them from an idea to a record, made a huge impact on how Brandon tells stories now.

Brandon has a second goal, as well. He wants the stories to be an experience with music complete with complex, layered soundscapes. “I’m not just adding the sound of thunder in the background,” he said. Rather, he wants the audio of each episode to fill the space between the ear buds with a sensation that physically transplants you to the grounds of the story.

Listening to it, you can immediately feel it’s NPR-quality audio, and Brandon’s voice adds the perfect balance of energy and silence.

Southern Gothic’s fans rave about the first 55 episodes. The ratings, comments, and conversations about each episode fuels the next. In fact, the audience helps bring new stories to the forefront, giving Brandon and Bryanne an endless well to draw upon.

Based mostly in Southern states, you’ll find episodes based on stories like The Legend of the Bell Witch in Tennessee, Blackbeard’s Demise from North Carolina, The Curse of Lake Lanier from Georgia, The Bride of Annandale of Mississippi, and more.

If you’re a fan of lore, history, and true-crime podcasts, Southern Gothic—aptly named after William Faulkner and the southern writers of the early 20th century who set out to figure out what the new “Southern Culture” really was—is the podcast that will bring your loves together. It’s an academic, audio, haunted history tour covering some of America’s most infamous hauntings, true crime, and folklore.