Many years before Jonathan Fields launched Good Life Project, his body told him he needed to make profound changes in his life.

After starting and selling his own business in college, Fields wanted a new challenge, so he went to law school, finished at the top of his class, and started out with the Securities and Exchange Commission’s Division of Enforcement office in New York City, doing everything from investigating insider trading to securities, all under the cloak of secrecy. Three weeks after he jumped to one of the largest law firms in the city, working almost nonstop and barely going home, a pain started emerging from the center of his body.

At first, he ignored it, until it became so brutal, he could barely breathe or stand up.

“I found myself whisked into the hospital and undergoing emergency surgery—whatever immune system I had left kind of collapsed at that point. There was an infection brewing in my body that just mushroomed into this giant thing that ate a hole through my intestines from the outside in,” Fields says.

After he recovered a few weeks later, he returned to work, but knew he couldn’t continue at the pace he had been going before. “My body had sent a really strong signal that what I was doing wasn’t okay. I needed to start thinking about how I was going to go about living differently.”

Fields started making a list of interesting paths he could take if he figured out how to support his family. Each returned him to the world of entrepreneurship, intersecting with varying degrees of spirituality, mind and body health, and fitness. Even though he didn’t know the exact direction he’d go, he prepared for about a year for the big move by saving whatever money he could as a cushion for the next phase of his life. 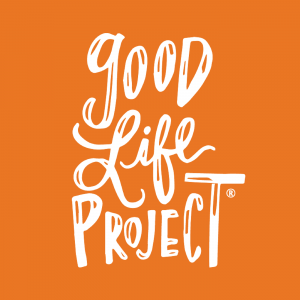 That health crisis was the first of two pivotal moments in his life. The second was 9/11, a few years later.

Just like other New Yorkers, Fields knew people who went to work that day and didn’t come home. One was a young father of two kids. “It really shook me and brought me to my knees,” he says. “I started asking the big questions: What does it mean to live a good life?

“It made me reconnect with the fact that we are not made any promises. Life is fragile. We and everything around us are impermanent.”

That’s when Fields earnestly started seeking how to best use his time on this planet. Even though it took a number of years to get to the point where he could put that mission into action, those events were the catalysts propelling him forward… ultimately, toward Good Life Project.

In 2008, he stepped into the world of creating as a blogger, writer, and speaker. “I had gotten into the habit of writing a big year-end reflection post on my blog, and the post published in January 2012 that reflected the year before turned into a 40-page designed-and-stylized annual report,” he says. “At the end of it, I teased this thing I called ‘Good Life Project.’”

Despite not knowing exactly what that would consist of, he was sure it would be equal parts media, education, and community. He ended up not only creating media that inspired and informed, but also educational experiences that helped people take action and understand how to change their lives.

“We were building intentional community around shared values and beliefs in the way we step into the world,” Fields says. To that end, he created experiences ranging from weekend events for a dozen people to four-day adult summer camps for 450.

Fields also started creating content for high-end production YouTube videos and stripping the audio, but he really wanted to get involved in public radio. When the founder of one of the big longtime public radio franchises told him, “The thing about audio is that it’s the most intimate medium on the planet, and you have to produce just for audio,” he says, “that woke me up. I was not leading the market in that space. I was just doing the minimum necessary.”

After embracing that change, “I just immediately fell in love with the audio side, and we started producing specifically for audio,” Fields shares.

While starting in video in 2012, Good Life Project launched as an audio podcast in 2014 and continues to present meaningful conversations about happiness, kindness, purpose, love, living a good life, and many more topics with leading voices in art, science, industry, and culture.

Fields has consistently created content that expresses his own tastes while making a difference in other peoples’ lives, but he says what matters most is being a present, loving father and husband. “That is what fuels me. Everything gets built around that.”

And what is a good life?

Two years ago, Fields and his wife and business partner, Stephanie, moved to Boulder, Colorado, to see if that is where they’ll spend the next season of their life.

“As soon as I hang up the phone, in less than seven minutes, I will be at a trailhead, and then for the next two to three hours—in the middle of the day, on a weekday—I’m hiking at altitude in the mountains. Being outdoors, moving my body in natural environments, is another major reset for me,” he says. “Our life has three major buckets: vitality, and that’s about your state of mind; connection, which is about the depth and quality of your relationships; and contribution, the meaningful effort or work.

“A good life is when you consistently do things on a daily basis. Say ‘yes’ to the actions, experiences, and practices that allow you to fill each of the three buckets as much as you can, and consistently keep them as full as you can.”

Who Are The People In Your Neighborhood?

For most of history, the only people you were able to do business with were those

Have you ever wondered what life will be like for you and your family? Does it

Imagine five years from now:  Your podcast is “Joe Rogan successful.” It’s on everyone’s mind, and

Michael and Josie Herman are the brains behind the award-winning science-fiction mystery podcast, Call of the

Have you ever switched your podcast’s media host? I can tell you right now, the whole