Whether listeners are fellow educators, parents, nostalgia-seekers, or weary souls in need of a hearty laugh, Two Mr Ps in a Pod(cast) hosts Adam and Lee Parkinson aim to entertain with a light-hearted, comedic view into classroom life.

Relaxing around a Florida pool four years ago, the Parkinson brothers were sharing funny stories and tales with their family about working in the classroom when Lee suddenly said, “We should start a podcast.”

Adam, who has worked in primary schools for 10 years, admits that he didn’t know what a podcast was when Lee mentioned it. “My brother said, ‘We just sit around and talk and record it,’” Adam recalls, adding that the simplicity of the idea sounded perfect to him. “We started recording a month later, and it’s just been an unbelievable journey so far.”

A teacher for 14 years, Lee wasn’t a stranger to providing online content. He already had a large following for his business, ICT with Mr. P, which provided training on how to use technology in the classroom, from sharing funny videos and school observations. Adam attributes that loyal audience to how quickly Two Mr Ps in a Pod(cast) grew to 50,000 downloads a week, and then to 5,000,000 in four years. 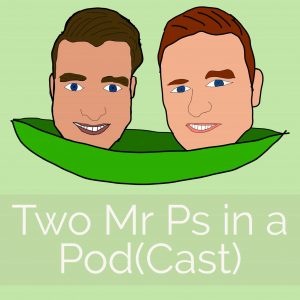 “We have a real core audience, and during the pandemic, we saw a massive spike, as I’m sure many podcasts did,” says Adam. “We’d meet up in the garden at either end of the table, microphone in the middle, and just shoot the breeze for a couple of hours. We’ve had such an amazing response, and it’s obviously led to incredible opportunities.”

Those opportunities have included publishing two books, Put a Wet Paper Towel On It and This Is Your Own Time You’re Wasting, and touring with their live show.

Lee and Adam, eldest and youngest of three sons, respectively, are natives of Manchester, England, with homes just down the street from each other. Four years apart in age, they got along well growing up, even though their personalities are vastly different. “He always looked after me even though I outgrew him,” Adam says. “I didn’t always make the right choices when I was at school… unlike my brother, who was very well-behaved and got good grades. We’re different that way.”

Adam gives props to Lee, who he says does all the editing, production, and marketing for the podcast. “I’ve never known anyone who works as hard as my brother,” he says, joking about himself, “I kind of turn up, get myself covered in crumbs, and, hopefully, provide the light-hearted perspective alongside him. I’m the equivalent of a grandma when it comes to technology.”

Their recorded conversations often happen after sporting competitions and family events, when their children—Lee’s triplets and Adam’s six- and three-year-olds—are tucked in bed. “We meet up and just laugh our heads off—an hour of just pure hilarity, which we hope brings people that light comic relief,” Adam says, adding that during the pandemic, many listeners shared how the humor helped them. “People were saying, ‘I’m going to visit a family member in the hospital, and it’s quite far away. The only thing that’s keeping me from breaking down is listening to you and your brother.’”

The hilarity includes telling stories about their childhood, their time in the classroom, and offering special segments that feature listener confessions as well as their 89-year-old nana.

“Whenever we feature Nana on an episode, we get so many lovely messages from people saying they’ve adopted Nana Maureen as their own, or from people who just absolutely adore hearing from her,” Adam shares.

“One thing you don’t realize when you’re doing things like this is the people it’s going to reach and the impact it’s going to have, even with something as simple as recording a three-minute segment with my nana, her being hilarious, and people taking comfort with the fact that there are still those legends around you.”

Adam has many funny stories to share about the innocence and brutal honesty that can simultaneously flow from children’s mouths. Like the boy who told his young teacher that his dad had just gotten his COVID-19 shot, so she would probably get called soon. The teacher told the child that she likely wouldn’t, because she was still quite young. “Yeah, but you are overweight,” the boy said matter-of-factly.

“He said it in such a caring way, but it was such a put down, and so brutal,” Adam says, adding, “I remember one woman shared about this child who was drawing the teacher and said, ‘Look, here it is. I’ve even got your whiskers.’ They will say things you don’t want to hear. Yet it’s so innocent! They don’t mean it as a put-down or bad thing—we’ve been sent so many of these stories.”

With Adam and Lee—and Adam’s wife— all being educators and parents, they have an inside understanding of the joys and challenges of the world of education.

“It is such a hard job, and sometimes, it can feel lonely. You maybe question whether you’re doing the right thing or getting the results you want to get. But as long as you are providing the children with what they need, and you keep them safe… if you can provide an environment where they are happy and making memories, that’s one of the biggest things I hope I do with my job—help children, no matter who they are, to make memories and have an amazing school life.”