What if watching Netflix could inspire a brilliant idea?

That’s what happened to Kylie Unell, while watching Self Made, a show about the first Black woman millionaire. In it, American educator Booker T. Washington makes an appearance, though the main character doesn’t like him. This got Unell thinking.

At the time, Unell was taking a class about German philosopher Moses Mendelssohn’s work for her Ph.D. in Jewish philosophy. She quickly saw the similarities between Mendelssohn and Washington, and after some research, she found that Washington received help from German Jewish immigrants influenced by Mendelssohn.

Her Ph.D. work compares Mendelssohn, who she calls “the first modern Jew,” and Washington. “The parallel of Blacks in America is very similar to Jews in Germany,” she reflects.

Few people could look into both worlds and make those connections, but Unell is the perfect person to do it. “I’m a safe container for it—I’m Jewish and Black,” she explains. “I embody both sides, so it makes it easier for me to talk about them.”

Unell grew up in Kansas, surrounded by her mother’s Jewish culture that was more social than religious. “Everything was Jewish, but not particularly religious,” she remembers. However, she describes her mom as “close with God,” and the family moved to Israel for her high school years.

For college, Unell headed to New York, where she discovered Jewish philosophy. Exploring the big questions of life, religion, and philosophy intrigued her and led to her becoming an observant Orthodox Jew. 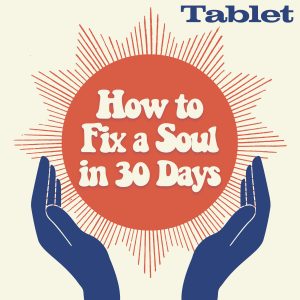 “For me, that was taking ownership of my religion, because I was following the laws and doing what I was supposed to do,” she recalls. The practices gave her structure, but they also came with some rigidity.

“What I see now is that it was not really imbued with life,” she adds. She was looking for meaning behind the practices.

What was driving this move to a stricter religious practice?

For her, it boiled down to getting control. And while she would not call it a “bargain with God”—as in, “I do this for you, and you keep me safe”—it essentially was.

A friend recently offered her an insight that helped. They said, “The way we relate to ourselves is mirrored in our relationship with God, sex, money, and all pleasure. The relationship you have to those things is the same as your relationship with your inner monologue.” This made Unell realize that she tried to control things because she was scared. “It’s scary to confront how scared we are,” she says.

As she matures, Unell is learning to trust herself. “As I start to feel safer with myself, my grip is loosened,” she reflects. Instead of trying to prevent negative outcomes, she trusts herself to handle them and God to be present.

“I’m letting go of the ‘right way’ of doing things and leaning into what feels right to me,” she says.

While Unell may be loosening up in some of her practices, she is still committed to the expression of her faith, including via some of the less-practiced seasons in the Jewish calendar.

She has multiple podcasts exploring these experiences. “I immerse myself in periods of the Jewish calendar that don’t have instruction, but are super spiritual,” she says.

On her show, How to Fix a Soul in 30 Days, Unell explores the Hebrew month of Elul. Interestingly, while many practices are wholly prescribed, the month of Elul has none. Placed at the end of the Hebrew calendar, it is intended to be a time of reflection and preparation.

Unell explores ideas such as walking in nature and bringing the audience along, apologizing to her friends (she doesn’t recommend it), and prayer. The last one (episode three) featured an insightful conversation with Rabbi Dov Yanah Korn and ended in a powerful thunderstorm.

In effect, the listener gets to ride along for Unell’s spiritual journey, as the intimacy of audio allows for a very personal look at her life.

“Sometimes, I wonder why I do it,” she chuckles. “There are times when I’m like, ‘That is too much, and you don’t need to give everyone everything.’”

But then, Unell gets serious for a moment:

“We are all just human beings, and we are all doing the same things. Everyone has an inner monologue. I’m just saying mine out loud,” she reflects.

Saying her thoughts aloud allows her to find clarity. “Plus, it’s cheaper than consistent therapy,” she laughs.