When longtime writer, editor, and journalist Kristen Philipkoski was in her 40s, she easily mingled with the 20-year-olds who also wrote fashion blogs and attended Fashion Week. But as she hit 45, and then 50, she realized her mindset was evolving.

The 53-year-old started her career at Wired as a freelance writer and moved up to staff reporter, and then science editor. After 12 years in that fast-paced environment, Philipkoski was burned out, so she took a break, got certified to teach Pilates, and enjoyed the chance to reinvent herself.

Despite this new direction, she missed writing and editing in the journalism world. “So, I switched gears and started writing about fashion and lifestyle topics,” says Philipkoski.

Besides launching her own blog at 41, the Penn State University graduate edited independent fashion blogs and wrote for fashion and retail sites like Racked, Eat, Sleep, Denim, and Forbes, where she still works. “I really enjoyed it—it was fun. I liked being in that scene,” she says. “But during this time, I was getting older—I was just behaving as if it wasn’t happening to me. I wasn’t talking about it.”

The day came, though, when she wanted to embrace her real age. “I didn’t want to pretend I was younger anymore,” she recalls. “I have gained a lot of wisdom from the aging process. There’s value in experience.”

As Philipkoski entered this stage of her life, she realized other women in midlife frequently didn’t have a voice in the media. She started recognizing how older women often lost their voices in the world. “They should feel celebrated for their age, but often, they are ignored, brushed aside, laid off—not considered valuable anymore in their jobs,” she says. 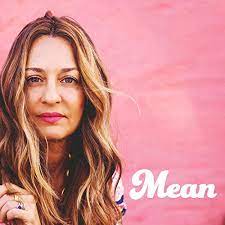 This realization set her on a path to provide answers and space for women mirroring her own midlife struggles and changes. That took the form of Mean Magazine and The Mean Show podcast, which she launched together in 2019. She liked the edginess and alliteration of using “mean” as a name, plus the math definition—the middle of a group of numbers—made her think about the middle-age factor.

She had been pondering the magazine idea for a while, because she saw the value and need for a publication focused on women like her. And the podcast came about because she wanted to have more intimate conversations with more women.

“It was all born at the same time,” Philipkoski says, adding that her audience is women wanting to hear from other women with similar issues who are diving into middle age with energy, ambition, and enthusiasm. “I just really wanted to reach this audience that I thought deserved to be seen and catered to instead of ignored. This is for women who feel like the media is ignoring them, and they have the whole second half of their lives ahead of them. Their lives are far from over.”

Although she hopes her podcast’s enlightenment will encourage younger women as they reach more advanced stages of life, Philipkoski doesn’t think having a resource like her podcast would have had much affect on her when she was younger.

“If I’m totally honest, I don’t think I would have paid much attention to it, because society as a whole avoids talking about middle age, midlife, menopause, and all the things we’re talking about. I probably would have been in some kind of denial,” she says.

“The education and awareness for women needs to start a lot younger, and we need to really be reaching out to the younger generations and let them know that when you turn 50, your life isn’t over. There’s so much more to come, and there’s nothing to be ashamed of. It’s a privilege to live this long, beyond middle age.”

Philipkoski stresses that younger women need to learn and understand about perimenopause, menopause, brain fog, hot flashes, hormonal imbalances, and much more, including the misinformation about hormone replacement therapy, which she sought out from her doctor after interviewing one of her guests.

“I didn’t even know what perimenopause was until mine was over,” she says. “In the past five years, it’s become so much more known and discussed, and that is fantastic.”

Moving forward, Philipkoski wants to cover more career topics and perhaps interview celebrities about their beauty regimens. “We admire these older celebrities because they look great, remain very active, and have vibrant careers, but it can be a little dangerous, because you look at JLo and say, ‘She’s the same age as me? What’s wrong with me?’” Philipkoski says she would love to find a way to interview a celebrity expert on how women can avoid the comparison, self-doubt, and self-criticism that celebrities can cause.

Ultimately, she enjoys sharing women’s stories and learning from them.

“I’m always super curious about other women’s stories and find it really helpful to learn from them—I think that is valuable for everyone,” she adds. “My podcast is important, because it gives women a voice… and it brings to light the importance of the second half of life. It lets women know that there is so much more to come.”