In the ocean of podcasting, there are plenty of podcasts for moms, yet only a handful for dads.

The Modern Dadhood podcast, then, is a rare fish.

Adam Flaherty and Marc Checket are the super-cool, devoted, 30-something dads/co-hosts who share an indisputable chemistry and zest for parenting. Though they are certainly not “experts,” they are the brilliant minds behind the show.

Both work in the creative industry. Adam is a husband, dad of two daughters, and video director and editor, while Marc is a dad of wonderful twin boy toddlers and an art director.

When Adam sold his video production company to a larger agency, his role within the company became more managerial, limiting his involvement in the day-to-day creative.

He felt like he needed a creative outlet that didn’t require anyone else’s approval, and the idea of podcasting was born.

“The decision to do a podcast, which is obviously audio-based, was a really easy one for me.”

Adam initially approached Mark, who is a fantastic designer, with a request for help creating a logo for his podcast. But as soon as they started talking, they realized they both enjoyed the banter, and so might an audience. So, Adam invited Marc to join him for the first recording, and they’ve been co-hosting the podcast ever since.

Since dad podcasts are rare in the podcasting industry, Adam and Marc did a bunch of research.

“We had conversations about how to ensure this podcast would be different from what’s out there,” says Marc. “It was really important to us to be authentic… that it really reflects who we are and is honest. So, at times, it’s vulnerable.”

For them, vulnerability is equally important in the role of fatherhood.

“We are absolutely okay being vulnerable—talking about emotions and feelings, getting teary- eyed on air, etc. The reason that’s important to us is because, in a sense, the show is examining what it means to be a modern dad. We are drawing distinctions and widening the definition of ‘father,’ or ‘dadhood,’ in a number of ways,” Marc explains.

Over 70 episodes in, their reviews speak volumes, pointing to the pair as “hilarious,” “honest,” and “insightful,” while having some really hard conversations that aren’t found in many other places. Some of their higher-profile guests have also commented on how unique the show is, as well.

Throw in a few dad jokes and some 90s nostalgia and sincerity, and you have their recipe for success.

Talking to dads, grandfathers, stepdads, and transgender dads from all different walks of life has brought them “so much knowledge, respect, and perspective,” they say. Their conversations about their experiences and what they’re going through (good and bad) help not only Adam and Marc realize that they’re not alone, but their listeners, too. 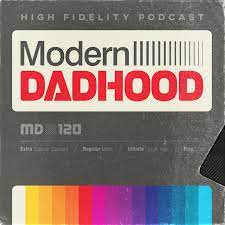 “Our show is a really safe place where you can feel confident knowing you’re definitely not alone on some island. There are other people out there going through what you’re going through and feeling what you’re feeling. You’re going to hear other dads talk about a range of things, and something is going to resonate with you, at some point.”

Not every guest on Modern Dadhood is a celebrity with notoriety. Listeners won’t recognize every name, as the person being featured might be one of the hosts’ friend or neighbor. In a few cases, they’re not even dads, specifically, but the topic they’re speaking about resonates with dads.

Marc’s favorite guest so far was astronaut Captain Winston E. Scott. They talked about STEM education and what it’s like being an astronaut dad.

“It was incredible. So many times during the course of that episode, I found myself going, ‘Man, this guy was an astronaut! It’s the coolest thing in the world.’”

For Adam, it was Terry O’Quinn, the actor who played John Locke on the show Lost. He also happens to be a personal friend.

“Regardless of his fame and notoriety, he’s still a dad to two 30- or 40-something-year-olds who he raised since they were babies. He had to balance work life as an actor—traveling around the country and being gone for months at a time—with being a dad… and doing it to the best of his ability.”

They also shared their good fortune to interview professor Jordan Shapiro, author of Father Figure: How to Be a Feminist Dad.

Adam shared how excited they were to record their episode with Michael Ian Black, a comedian, actor, writer, and director, which is set to release in a few weeks (as of this writing).

They also got a chance to have a conversation with Chris Gethard, a comedian, performer, actor, writer, and podcaster. In this case, they didn’t even reach out to him. Chris was promoting an essay he released on the Scribd platform and reached out to them.

“It’s crazy how these things happen, but you sort of make room for these opportunities, and then allow them to happen,” says Adam.

Marc and Adam hope their listeners get the same thing out of their show as they do—ways to become a better dad and person.

“Being a parent is a learning experience—you have to constantly grow and adapt,” Marc shares. “Hearing that other people go through the same joys and struggles as you is cathartic.”

“I hope people listening to Modern Dadhood are entertained and educated,” adds Adam. “We celebrate the fun, exciting, and rewarding things about having kids and being dads, but it’s also a place where people can vent about the stuff that’s really hard.”

Their wives are not only avid listeners, but huge fans, too.

“Jamie has listened to every single episode,” says Marc.

Adam chimes in, “I think both our wives find it entertaining. They like hearing the stories about their kids, as well.”

To wrap up, Adam and Marc had this to say about Dadhood:

Adam: “If we can elevate the conversation about fatherhood to something people talk about openly and regularly with that vulnerability that we’ve been describing, it helps make better fathers.”

Marc: “It’s comforting to know we fathers can lean on each other through the tough moments.”

To the daddies out there: consider this your invitation to continue the real conversations around what it’s like to be a modern dad.