Ever since he was a teenager, Paul Vogelzang worked.

Having been previously employed on Capitol Hill in Washington, D.C. (where he lives), with the Treasury Department around the time of 9/11, and with other Federal Government jobs and contracts, Paul never expected his world would shatter on May 10, 2015—just nine days after his 58th birthday.

Yet there he sat, in an auditorium filled with countless other employees in his age range, waiting for Oracle to dismantle their worldwide marketing group and lay off 15k employees… including himself.

He was dumbfounded. He had never been fired before, nor laid off.

His self-identity as a “working guy” crumbled and led to a series of events that changed the course of his life.

As his four-month severance package ran out, Paul scrambled to get a job—any job. The outplacement services promised by Oracle were a dead end… no one wanted to hire a 55+ employee, even if his technology skills were current, and he was “plugged in.” Oracle did nothing more to help Paul, or many others, find a job. He was on his own.

As his funds ran out and his credit tanked, Paul couldn’t even land a job at minimum wage companies like Walmart, Home Depot, Target, and Lowes. Why? Because, as a cashier, he was considered “vulnerable” as a “credit risk.” He could not believe it!

Withdrawing and feeling the weight of not knowing who he was anymore, Paul went into a tailspin.
He found himself gaining weight, making excuses, questioning if something was “wrong” with him, and feeling like his depressive state was zapping his drive, energy, and limited resources.

And he knew he was completely on his own; he did not even have the financial resources to seek out counseling services.

Although Paul stated that he never thought about suicide, his mental stability was at stake because his whole identity as the provider was shattered. He started consulting a little here and there and doing some online work, but nothing was sticking, and Paul was growing even more depressed.

At the same time though, that “superhero seed” of not giving up began taking hold as he remembered one of his favorite quotes by Andy Warhol:

“They always say time changes things, but you actually have to change them yourself.”

So, Paul did. He got out of his head and began coming out of his shell.

He reached out to others who were part of the Oracle layoff and heard very similar stories.

He searched LinkedIn and found a group called “Oracle Sucks,” and became regularly involved in it. Hearing the members’ stories inspired him to begin writing about his experiences: as someone who had never been without a job, the ridiculousness of some of the interview processes, what it is like to be over 50, and anything else related.

While Paul believes he has a great sense of humor, he has never thought of himself as someone who is automatically seen that way. But he approached his writing now with a bit of humor, sharing stories like being interviewed by people a quarter of his age who ask questions like: “How many sugar cubes does it take to fill up the Sphynx?” and “What is your favorite cake?”

Prior to signing the severance agreements all laid-off Oracle employees were required to sign, he and several others consulted an attorney in the Northern Virginia area to see if they had an age discrimination suit. The advice: sure, they potentially had a suit, but as Oracle had deep pockets and a bottomless well of resources, it would not go anywhere, because they would be buried in legal expenses. They dropped it.

But it was precisely these types of stories that Paul wanted to share with others—the real situations the over 50 population faces in their lives, in their employment, and with their health. After all, this group of people have disposable income. They read books. They care about a lot of things… yet that care is not reciprocated when it came to changes, transitions, and challenges they face simply by being over 50.

As the feedback continued to increase, Paul took it one step further and started interviewing others about their experiences. By February 2016, his podcast The—Not Old—BETTER Show was born. 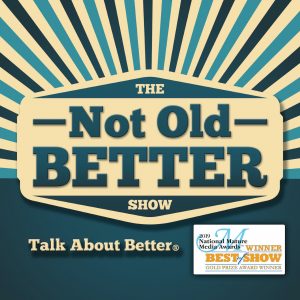 Paul has always loved connecting and talking with others. He loves hearing their stories. Yet, because his past career was usually about the salary and benefits and he liked the jobs well enough, it never dawned on him that he was not following his heart’s path…

Paul had a life-long admiration for the singer and knew of her unbelievable connection to another musical group: Crosby, Stills & Nash. He felt that if he could get her on his podcast, he would be set. He said, “If I could talk to Judy Collins, I’ll have made it!”

Thinking outside the box, Paul knew she was performing locally one weekend and convinced the club owner it would be a “win-win-win” if he could interview her—free publicity for the club, for Judy, and for his show. After Paul’s superhero bulldog persistence, the owner finally relented and forwarded Judy’s manager’s info to Paul.

Upon Paul’s request, Judy shared their interview and Paul’s show with her network, which became a pivotal moment for the show. It went so well that Judy’s manager came to Paul to request a second interview! WIN!

Paul became even more determined to align with organizations that served the 50+ population and to speak at any event that would have him about the issues his population faced.

Next to the Judy Collins interviews in 2016, Paul points to his alliance with The Smithsonian in 2017 as a top threshold moment.

And these career-changing occurrences caused Paul to realize that “this was the direction all along.” This path of podcasting and interviewing others, sharing their stories and expertise, was really what was speaking to his heart and becoming his “true north.”

Yet, the growth of the show was still a bit slow. As Paul stated, “This was ok, because it forced me to be involved—answering comments on social media and finding other ways to share the vision.”

He knew he needed to align with others who shared his vision, passion, and desire to shed light on the plight of those over 50… but, like his show’s growth, it didn’t come so easy in the beginning.

Paul had the vision to align with AARP—an organization for those over 50. He had a meeting with them in the beginning of his podcast. They, as he stated, “laughed me out of the office.” Yet, his superhero perseverance would not allow him to give up.

After the successes of his show were noticed by some strategic alliances and the caliber of his guests continued to rise (talking with movie studios and creating more win-win’s for celebrities), Paul secured an affiliation with AARP. This led to multiple invitations to speak at their events to further not only the cause of bringing light to the issues faced by those 50+, but also his show’s reach.

Ultimately, this series of events developed into an affiliation with the National Institute of Health and a researcher specifically looking at suicide rates among men over 50. His affiliations with these organizations, institutes, and groups have continued to provide a wider reach for a platform that supports the 50+ population… while bringing entertainment and value to the group.

Paul believes that everything happens for a reason, and he knows from personal experience that “a lot of life is perseverance and trying.” His life after his layoff and his show are proof of that.

All of the questions and emotional, physical, spiritual, financial, and psychological challenges Paul faced after his layoff—including his deep questioning of self and fears about who he was … the internal dialogue that insisted something “must be wrong” with him when he couldn’t secure a new job… the fear that he would no longer be the provider he always knew himself to be—led to this simple awareness:

“Regardless of how low you might feel you are, you CAN do something with your life—keep going!”

And that superhero internal perseverance is what allowed Paul to do the same… to finally hear his heart’s voice whispering to him that this—podcasting—was the direction he was meant to take. This was the impact he was to have on the world. This was the true north for his life that had only been hidden for a while, but now was clear.

And now, Paul spreads the message that one is “NOT OLD” but “BETTER” as he ages with grace, dignity, and the will to fight his own internal dialogue to become the superhero he has always been.

Paul didn’t give up, and he hopes you don’t, either!

When 1+1=4, A Formula for Ultimate Health and Deep Love

When 1+1=4, A Formula for Ultimate Health and Deep Love