What do you do if you’re the guy who owes money to the Korean Mafia? Or the one who realizes he’s got to escape an uber-religious cult?

What if you’re the gal who grew up on a farm and finds herself living in her car and working for free?

You try these three steps:

That’s what Britnie Turner and Jerremy Alexander Newsome, the two entrepreneurs behind the Broke to Woke podcast, decided to do. 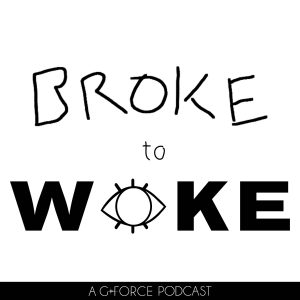 And they exemplify a recurring theme in their show: how to keep it all together when everything around you seems to be falling apart.

They’re real, raw, and relatable. Whatever your own challenges, you’ll identify with the stories they share around the following questions and topics:

But with topics that “big” to tackle, you might be wondering…

Who are these two relative youngsters? And what qualifies them to dish out business and life advice?

In a word, experience.

Britnie might have been living in her car at one point in life, but today, she’s the powerhouse behind the Aerial brand. Her mission is to utilize capitalism as a force for good while focusing on that triple bottom line: people, planet, and profit.

Jerremy learned plenty from owing the mafia money. With a seven-figure business of his own, he’s now a pioneer in “fiscal therapy.”

While money and therapy definitely do seem to fit together, I hadn’t seen that particular phrase before, so I just had to ask. Jerremy’s explanation: he’s on a mission to reshape our thoughts, beliefs, and ideals around money… and literally wrote a book called Money Grows on Trees. (You’re already off and mentally searching Amazon, yeah?)

I’m not exaggerating even a little bit to say Britnie and Jerremy have had some crazy experiences along the way to success and happiness.

That path is what they’re itching to share: the journey, the ups and downs, the pitfalls to watch out for, and the smart moves you can make, too.

They’re not satisfied with their own success. Their mission and inspiration for the podcast is hiding right in the title…

We all know what “broke” means. But their definition of “woke” isn’t necessarily what you might think. Britnie defines it this way:

“Understanding your purpose in life and walking in the fullness of your potential.”

Are YOU ready to wake up and dive into your purpose and potential? To live your own “woke” life?

It’s all about small changes and mindset shifts. And in every episode, you’ll experience the lightbulb (and sometimes fireworks) moment coming on as the dots to success connect.

When Jerremy shares what he loves about the podcast, he puts it this way: “I like dissecting people and asking questions other people won’t ask.” And that’s exactly what he does.

Here’s a few snippets to give you a taste of what to expect… which is to think differently, so you can become the “next level you” who achieves your dreams and makes positive things happen in the world:

Jerremy on happiness: “When you have no reason to smile, but you do it anyway…”

Britnie’s straight talk on money: “Don’t expect to just get paid a lot. You have to earn this ish [the success and money you want].”

Side note: Britnie would know! Remember how she lived in her car and worked for free? She also became a multi-millionaire serial entrepreneur in less than five years. She’s been honored in Forbes for having the sixth Fastest-Growing Woman-Owned Company in the world.

Jerremy on becoming exceptional: “People don’t want to experience the pain. But for someone to grow and become exceptional, you have to go through it.”

In their first season, these co-hosts shared powerful conversations about life lessons, lawsuits, love, and losing everything. And they’re just getting started. Season two kicks off early 2021.

Michelle Shaeffer is the co-founder of Planet Business, founder of the Empath Entrepreneur Academy, an award-winning blogger and podcast host. She’s the creator of Lingo Dynamics, the science of “words that feel.”

Michelle has mentored 25,000+ bloggers through blogging challenges and her popular podcast reaches 156 countries around the world. Through her blog, podcast and social media, she’s connected with hundreds of thousands of entrepreneurs, guiding them towards creating profitable businesses they’re passionate about while making a positive difference in the world.

How ‘Superhero Perseverance’ Led Paul Vogelzang To ‘Not Old, But Better.’