As the plane carrying Devi Adea from Washington DC to San Diego landed, she could sense that something was different. The joy she usually felt upon returning to The Golden State was no longer there, and Adea knew something needed to change.

In essence, what started as a trip to care for her parents turned into a desire to move back to the East Coast and do so on a more permanent basis.

But her entire life was in California, and her husband grew up there. Would he want to pick up everything and move clear across the U.S.?

Adea knew she had to trust her intuition and have the conversation even if it was uncomfortable.

So, she explained her feelings to her husband and gave him some time to think about it. Within days, he was in, and just three weeks later, the couple was selling their house, loading everything they owned into pods, and setting out on the long road trip from California to Virginia with their cats.

Circumstances worked in their favor, including their securing a deal with a contractor to trade an extra car for work on their new house. Adea calls this “divine synchronicity.”

“If you’re feeling a call or a push toward something your soul is telling you is right, there may be something beyond what you know that is speaking through you,” reflected Adea. She encourages others to pay attention to that prompting. “The amount of support you’ll get in the transition is pretty extraordinary.”

Adea was not always connected to her inner voice as well as she is now. While her family was full of mystics and clair-gifted people, they also warned her to be careful what she said to outsiders. Those who don’t understand might think she is crazy, they cautioned. As a result, Adea hid the intuitive part of herself for years.

How did she learn to trust her intuition so effectively, then?

Adea went to a prominent college and found a job in the software industry, quickly rising through the ranks. Then, one New Year’s Eve, she sat down to write a list of things she wanted to do in the following year. Stumbling upon her list from two years prior, she realized it was exactly the same.

“Everything I said I wanted to do remained. I had done none of them,” she recalls. Determined to start checking some of the items off her list, she immediately decided to schedule one per month. 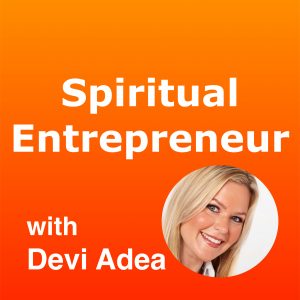 That year must have been a whirlwind! Adea completed over 50 jumps and became licensed in skydiving. She became a licensed scuba diver, too, and ran a marathon, and traveled Europe.

One by one, her bucket list became smaller, and then, it was complete.

Adea took stock and realized she did not feel more fulfilled. What could that mean, she wondered?

Once again, Adea pivoted to try and find what she was missing. “If it isn’t about money or experiences, maybe it’s about contribution or something,” she recalls contemplating.

She attended a Tony Robbins event—firewalking and all—and began coaching with the company. But she still had a nagging feeling that what she was doing was not what she was looking for. Contributing to others in this way was nice, but not enough.

“It took me many years of trying,” she remembers. “I went through a bunch of things.”

Adea couldn’t decide what kind of podcast to create. Then, one of her friends suggested a domain name she’d owned since 1999: The Spiritual Entrepreneur. The friend gave her 72 hours to make a decision, a gesture of accountability Adea remains grateful for today.

Despite her family’s warnings still ringing in her ears about sharing her gifts, she decided to move ahead with the show. She remembers physically shaking during the episode in which she shares her story.

“I ended up doing it. And they didn’t lock me up and throw away the key,” she remembers with a smile.

The Spiritual Entrepreneur, with it’s perfect five-star Apple rating, “covers everything from practical business tips, tools, and best practices of spiritual entrepreneurship to lifestyle design, innovation, love, soul awakening, and spiritual habits for success. Devi created this show to help us all to upgrade our consciousness, practices, and fulfillment in business and life.”

Plus, finally acknowledging her gifts publicly gave Adea something else: peace. And now, over 250 episodes into her podcast, she has finally found what she was always looking for.

“It’s really about expressing that voice of our soul—the true gifts we’ve been given. When we do, we get to experience who we are in a way that is really serving and uplifting as a collective,” she said.

Today, Adea helps others learn to listen to and express that voice, as well. Even if one doesn’t have the gifts she does, she believes trusting your intuition can be learned. “Sometimes, it’s as easy as saying ‘God, I need a little help here. Show me what’s in my highest and best,’” she shares.

Then, simply pay attention. “You will get signs everywhere, if you pay attention,” she said, just as she received when her plane was landing in San Diego.

“It’s so fun, too, when you start to listen to those intuitive insights and act from that sense of inner knowing. You get to experience the Divine in response,” she reflects.