Rae Leigh, executive producer and host of Songwriter Trysts, is on an amazing journey.

She will openly tell you that music saved her life.

Growing up with parents who had mental health issues was far from easy. Her mother struggled with depression, and her father had been in the Vietnam War. Rae Leigh, in turn, ended up being a victim of child sexual abuse for eight years.

Her saving grace was her intuitive draw to music. She grew up in a church where she was surrounded by music, and at the tender age of six, she started playing the piano. Before long, she found herself writing songs and poetry in a journal.

For a long time, she was afraid to sing her songs in anyone’s presence. After all, it would have left her vulnerable to too many questions. People were likely to be curious about the inspiration for her darkest songs, which had emerged from her deepest secret.

One day, though, Rae Leigh finally faced the music. She took the brave step to perform her original songs at an open mic event. That first step was all she needed to overcome her fears. Performing became her emotional outlet, fulfilling the same role her journal had in childhood. She started going to open mics four to six times a week and learned which songs worked well in a live environment.

“That was the space where my soul and body were able to process and express what I was feeling, even though I couldn’t articulate it,” she recalled.

Rae Leigh gained more momentum in her journey to become a known singer/songwriter when she released her first single in January last year. By March, she had released another and performed at some live shows before the pandemic shut everything down. She moved her performances online at that point but missed the connection she had enjoyed in person with live audiences. And so, the idea of Songwriter Trysts was born.

The term “tryst” refers to a private rendezvous. Rae Leigh said, “The name appealed to my cheeky nature. It fit with the concept of songwriters connecting over their pure love of music and passion for creating a new song.

“With Songwriter Trysts, we provide a safe space to talk about everything with honor and without shame. I believe there’s room for all emotions, and we need to be able to embrace them all,” she explained.

After many years of therapy, Rae Leigh can now share her story openly. “Everyone has their own story. Everyone has had to deal with their own emotions, and that’s what I love delving into.” She describes herself as a naturally curious person. “I am interested in human behavior. Why do we act the way we act and do the things we do? I had always thought it would be interesting if I recorded my conversations and shared them with others.” 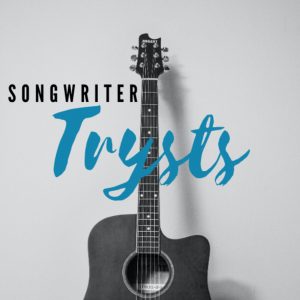 Now, every week, artists gather on the podcast to discuss their love of songwriting. The show provides an opportunity to delve deeper into their songs, where they come from, and what they are creating.

“I wanted to be able to connect with people who are likeminded. Songwriters are a unique bunch, and we build an almost instant rapport with each other, often talking about our songs as little song babies.”

What does she enjoy most about hosting a podcast? “Meeting all the unique people I speak to and getting all the different perspectives and pieces of advice just fills my soul. I always have a big high after a conversation with someone, especially if he or she is from a different culture than mine. I feel like I learn so much, and there’s something really refreshing about that for me. I hope I convey that to my listeners, so they feel like they’re getting to learn along with me.”

It turns out Songwriter Trysts is rapidly garnering attention around the world. Fortunately, Rae Leigh’s husband, who is a project manager and business consultant by profession, does a lot of work behind the scenes to keep them on track with releasing two to three episodes per week.

Rae Leigh’s advice for anyone who is starting a podcast is simple. “Don’t try to do it all. You’ll just burn out. Find a team you can trust and work with. Rely on others to do what they’re good at and appreciate them. That will also allow you to step into your strengths.” She added, “It feels great to be able to be living my purpose.”

Whether the subject is building a podcast or writing a new song, Rae Leigh believes, “Life is all about the connection we share with each other.”

This Aussie is showing no signs of slowing down. She has had some amazing guests on various episodes; she releases songs under her own independent record label; and she recently launched the music video for her single “Find a Better Day.” Rae Leigh shared how, because it rained the day they were to shoot the video, they ended up shooting it on her bed. Although it was initially a slightly unnerving idea, it was also serendipitous, because that’s where she typically used to muse about having better days ahead.

It’s safe to say Rae Leigh has found some of her best days—no longer is her immense talent hidden under years of childhood trauma. She even has a role in an upcoming movie about the life and times of Elvis, starring Tom Hanks and directed by Baz Luhrmann.

The advice she has to share with you, Podcast Magazine® readers, is the same she has for her own children:

“Follow your dreams and do what you’re passionate about. Everything happens at the right time,” she said with the gentle wisdom of someone who has overcome a great deal.

That advice extends to those who are thinking of starting a podcast, as well. “Make sure it aligns with your heart, and keep following that,” Ray Leigh advises.

Look where it has led her!

UTR: On The Bench