The question seems simple enough. Maybe the mind immediately wanders to a wallet where one keeps bills and coins, or a paycheck, or the electronic transactions that keep life moving.

Everyone knows about money… but is there more to it?

Lapin, a descendent of a long line of rabbis, never wanted to be one himself. Watching what his father went through, Lapin held a deep conviction that he would not travel that road. He felt the work is too unquantifiable—effectiveness is difficult to measure in spiritual work.

Still, he found himself leading Bible studies for fun, and pursuing theological education.

Everything changed when a senior rabbi approached him during a study session with a friend.

“I want you to sit for the rabbinical examination at the beginning of the month,” he said.

Feeling left out, Lapin’s friend asked when he would do the same.

“Not you,” the rabbi said in a tone Lapin described as “callous.”

The friend became a prominent neurosurgeon.

“My ministry,” he said, “is making accessible ancient Jewish wisdom in the categories of faith, family, friendship, and finance.”

Rabbi Lapin calls those categories “the four F’s,” and all are spiritual in nature.

“If any word besides these four come to mind when I say the letter ‘f,’ it’s evidence of a misspent youth,” he deadpanned.

When he started a synagogue with Michael Medved in Los Angeles, funds were scarce for the new congregation. So, he kept his day job at a large financial firm, which alleviated his concerns about the rabbinate. No longer constrained by cultural movements of the day, Rabbi Lapin was free to operate the synagogue as he saw fit.

“People had exactly the same recourse as they would in a supermarket if they don’t like the watermelons. Namely, shop elsewhere,” he said with a grin.

For instance, in his congregation, men and women sat on separate sides of the synagogue—a counterintuitive expectation for a generally progressive place like Los Angeles. 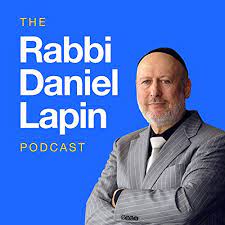 His reasons, of course, have nothing to do with either sexism or segregation. Rather, the rabbi explains that sexual attraction is present even when we are not aware of it.

Separating the sexes allows that to recede into the background during worship. In time, Rabbi Lapin found that women in the synagogue also appreciated the freedom.

This is just one example of how financial flexibility allowed him to lead from his values, serving in a way many congregational leaders do not enjoy.

When Rabbi Lapin talks about his values, there is a feeling similar to discovering buried treasure; while traditional, they’re still richly valuable.

One of those values is the distinction between physical and spiritual items. Understanding the difference changes one’s expectations about a host of life topics.

Money and relationships are also spiritual parts of human lives. “It’s not a mistake that the Torah is filled with information on sex and finance, because those are two extremely spiritual areas,” says Rabbi Lapin. “If you treat sex as simply friction and plumbing, you’re not going to get it. If you teach finances as nothing other than materialistic greed, then you’re not going to get that either. For those things, you turn to the Torah.”

How, then, is money spiritual?

“Money is evidence you have served another one of God’s children,” Rabbi Lapin explained. “As long as you didn’t hold up a convenience store. As long as you got it as the result of a transparent, free market, voluntary interaction.”

So, money is a spiritual exchange based on value and voluntary involvement. When selling a good or service, money is an exchange of one kind of value for another, making both parties richer as a result.

Money, then, is more like the tune than the saxophone.

“If you want to know how the world really works, study physics, mathematics, biology, and Torah,” he suggested.

Rabbi Lapin’s books, Thou Shall Prosper and Business Secrets from the Bible, further explain the ancient wisdom of the Torah and make it accessible to modern human beings.

He also shares his wisdom on his podcast, in which he reveals “how the world REALLY works, and reminds us that the more things change, the more we need to depend upon those things that never change.”