From an early age Tim Montague was surrounded by the ideals of activism. Not just the words that are never backed up by action but a family that also walked the talk about environmental and human causes. His dad is a professor in environmental studies and growing up Tim helped his dad built solar panels well before it was “in” or that tech made it easy with photovoltaic (PV) cells. His mom was the Director of the National Gay Task Force in New York City so one could say that caring deeply about people, and the planet, is in his DNA.

Tim’s show is The Clean Power Hour and before that show, and partly concurrently, he also hosted The Solar Power Hour. Tim works full-time in the alternative energy industry but to him he would prefer it become the first-line choice. His mission is to “speed the energy transition.” “It’s not about saving the planet, though. For Tim “it’s about saving our butts”. The “planet can take care of itself.”

Tim met his now former wife in Norway on a study abroad trip his sophomore year of college. They married in his senior year and after graduation they decided to travel abroad together. They saved up $5,000 to take a trip around the world with a stop studying Buddhism at Kopan Monastery in Nepal. Traveling right after school gave Tim a worldview perspective that he wishes everyone had the opportunity to get.

After a many months long journey throughout Southeast Asia, Tim caught malaria and paratyphoid in Indonesia. By the time he got to Australia he ended up in the hospital but the lessons he learned have served him over the years. He hopes to go back to Australia someday as the first experience didn’t end on the up note he would have preferred. 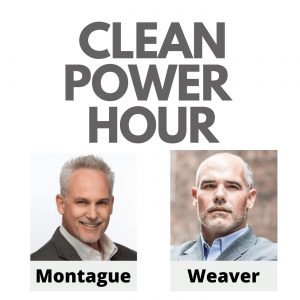 Did you know that Australia leads the world in solar power? In 2020 close to 10% of all of Australia’s power was derived from solar power and that the cost of solar is one-third the price of that in the United States. That is just one of the facts you will learn listening to Tim’s show or having a conversation with him. He is a walking encyclopedia of clean energy history and facts. Ask him any question about power sources like wind, solar or water and have a notepad ready. You will learn more about the how the why and the when about energy then you thought was possible from one person.

Tim’s cohost on The Clean Power Hour is John Weaver. John’s been in the solar industry as an installer for over a decade and is a Journalist for PV Magazine. The show started as a news roundup of energy and morphed into its current incarnation of news and interviews with experts and thought leaders in the industry. Throughout the show the passion from the hosts shines through and you may find yourself questioning your own consumption of power.

Earlier you read about Tim’s trip to Norway during college. Tim’s Zoom background is of Bergen, Norway. He lived there for three years and his children currently go to Norwegian Technological University. To say that he loves Norway would be an understatement. Compare it to his passion for clean energy and you might be close in the depth of his passion. He believes that “Viking economics is the modern permutation of the high road.” He will wax eloquently about the Scandinavian economic, societal and environmental foundations and how they differ from those in the United States. He does it with such knowledge of the intricacies that you might begin to question why other countries around the world aren’t looking to implement some of their success models.

Tim’s perspectives have influenced even what he calls himself. He prefers not to call himself “an American but rather a global citizen” and he is concerned about humanity and the wellbeing of humanity.” Although you might have figured that out about him already.

Tim not only talks about clean energy and its future on his show, he also sells it. He is all-in on changing the way the world consumes energy. Considering his grandfather ran a magazine in Chicago called Black Diamond, talking about the coal industry and fossil fuels, it is interesting to see the transformation in focus his family has undergone into alternative fuels.

Tim might say that means that if his family saw the need to look beyond coal when they were invested in its success a generation or so ago, then perhaps the world can change.