Hacking comes in all forms. Sometimes, it doesn’t even require a computer.

Chris Cochran and Ron Eddings, creators and co-hosts of the Hacker Valley Studio podcast, have taken the idea of hacking to another level. They not only tackle hacking cybersecurity in the traditional sense, but also as it relates to the brain—for performance, mindset, inspiration, and productivity.

Chris took a new job with Netflix that required him to move prior to his pregnant wife and two children joining him. Starting a new job is hard enough to deal with on its own, never mind having to leave your family to sell your home, pack, and move to another state. In this case, that stress led to Chris’s internal transformation, resulting in “Chris 3.0.”

According to Chris, version 1.0 “led to his divorce from his first wife, and version 2.0 was driven and selfish.” But apart from his family, he was able to dive headfirst into hacking his brain.

His friend Ron lived in a house with a few other tech guys all focused on productivity. Chris joined them for weekly yoga sessions, and they all read and discussed books on a regular basis. On Sundays, they focused on learning different breathing and meditation techniques.

They held each other accountable not only in tech, but in personal and physical development.

What Chris learned reading, doing yoga, and living a life focused on improving his mental and physical game got him on a track to become Chris 3.0, and it changed his relationships with his family. 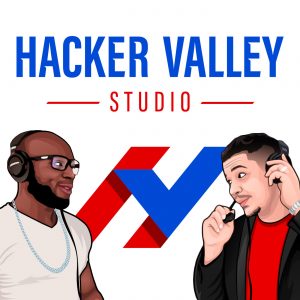 Not only that, but it inspired him to create the hit podcast, Hacker Valley Studio, upon Ron’s suggestion.

Ron, who was already creating a course on technology, proposed that he and Chris “hop on the mics and start a conversation about technology and cybersecurity.” Clearly, they also had a shared interest in “the other human elements of performance… the human elements of life, in general.”

As technologists, Chris said, “We are mental athletes with no offseason. We’re using our brain all day long, which takes energy.”

Essentially, Chris and Ron both wanted to find ways to bring “the fringes of performance” to the tech community to help people improve their lives. They wanted to take what they were doing in their house out to the world.

Listening to the podcast and the questions the hosts ask, their thoughts around hacking human performance are clear. Chris wants to “leave people better because of our interactions,” and hopes they realize that “they don’t have to do the things the way they’ve always done them.”

What are the intersections between technology and the human condition? That’s one of the questions that drives Chris and the show. One of his favorite episodes is with Chess Grandmaster Maurice Ashley, the first Black chess grandmaster. Maurice knew nothing about tech or cybersecurity, but when Chris and Ron explained some of the concepts that they dealt with every day, Maurice drew an analogy to chess. Another favorite was all about empathy and “hacking people with empathy via social engineering.”

Chris believes that every single conversation he has had on the podcast has changed him dramatically. From “a game of inches of change,” he has grown and shifted his mentality, and not just around cybersecurity and his work. He goes into each episode with an open mind, because tech is not just about tech. It flows into life, and life flows into his day job. He and Ron are advocates of diversity and inclusion on their show, and that also means having guests from different cultures and backgrounds versus the usual ‘suspects.’

Chris and Ron’s passion for learning has expanded into Hacker Valley Media, a company developing podcasts to change the industry and enlighten companies and people about how they can grow and improve. New shows focus on Web3, the two different sides of cybersecurity (offense and defense), and underrepresentation in tech.

Chris wants his daughters to see strong, powerful women in many different roles, so they know they can be whatever they want. He also loves to involve his family in his work. His daughters are featured in some of his video content, and his wife, Jennifer, works at Hacker Valley.

“Those of us who are focused on just being better—on being optimal for ourselves, rather than adopting the ‘us versus them’ mentality—compare ourselves to who we were yesterday. That makes us all better. Do that, and eventually, you’ll be the person you want to be.”

Now, Hacker Valley Media is monetizing the podcasts they create and bringing in additional hosts. Chris and Ron are focusing on where they can grow as entrepreneurs.

Those first few months waiting for his family to arrive not only created Chris 3.0, but in the long run, they started a cascade of change for others, as well.