“When you’re from New York, New Jersey is just like come on… why would you even go there?” said Christina Sasso as her husband Frank chuckled nearby.

How the couple ended up owning a podcast-hosting company in New Jersey and producing four shows of their own is a fascinating story.

Christina grew up in Brooklyn in a Roman Catholic family. An imaginative child, she remembers “going to Catholic school and thinking it was fantastic,” she said. When asked about stories of abusive treatment at the hands of nuns running such schools, Christina smiled.

“Yeah, but that was part of the charm,” she reflected, before relaying a story about the time a nun yanked her pigtails when she was talking out of turn.

Meanwhile, Frank, the problem child of his family, grew up in Queens. “I was always drawing and always talking,” he reminisced.

In third grade, Frank drew a picture of Jimmy Carter as a peanut and promptly got in trouble for drawing in class. He listened through his parent’s bedroom door as they discussed his potential punishment.

“You’ve got to admit, it is a really good drawing,” his mother said. Frank would never forget that affirmation of his talent.

He continued getting into trouble fairly often, and by the time high school rolled around, he had already repeated two grades. He dropped out when he learned his junior year would also need to be repeated, though he eventually earned his GED.

Frank entered the working world, and his insatiable curiosity continued to get him into trouble. “I pretty much got fired from every job I ever had except for two,” he admitted. “I question processes. You can do that when you’re the boss, but not when you’re the worker.”

Then, in 1986, Frank and Christina met while doing a community theater production of Oklahoma. They stayed in touch, remained friends, and once they were both available, began dating. 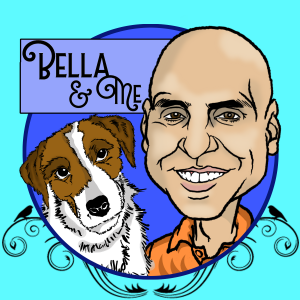 The couple began to spend more time together and became involved in Amway. They did well and attended the company’s famed conference complete with Sunday morning worship. They felt convicted and went forward during the alter call to give their lives to God.

As they looked for a house, New Jersey became an affordable option, so they made the (unthinkable) move south.

New faith and a new town meant that they also needed a new church. They began attending Protestant church instead of pursuing Christina’s Roman Catholic roots. “I still didn’t get it,” she said.

They attended one church for seven years and then left under difficult circumstances. Then, they attended another, and had a similarly difficult time when they pointed out how the community was becoming more legalistic. So, they sought out an outlet to share the grace they believed in, and their website was born.

Then one day, Frank was perusing his podcast apps looking for the kind of encouraging content he wanted but could not find. Christina wondered aloud about having a radio show where they could talk instead of write about their ideas.

“We’ll just make our own recordings with our friends,” Frank thought.

Today, the Sassos produce four shows, including one called Bella and Me for children. This one started when Christina kept speaking for their dog to Frank, carrying on conversations and giving him instructions. Her imagination sparked the idea, and now, Bella travels all over the world and through time on adventures that they share with their young audience. One episode even included a chance encounter with the Beatles, voiced by Frank.

What started as a couple of podcasts is now a full-fledged network and hosting company—the only one in New Jersey, as Frank likes to say—called New Pod City.

New Pod City just announced Will Foskey as their new president. With Foskey at the helm, the Sassos can focus more on the vision going forward, their mission to help more podcasters grow their reach, and their own creative and business ventures.

“We love helping people be successful; that’s how we are successful,” said Christina.

The couple has even started a podcast called Trenton Waves, “the un-official podcast of the City of Trenton.” It’s safe to say that New Jersey has grown on them.

“Our heart is for the city,” Christina said. “We love it.”