Heresy has an upside.

“Surprisingly, there are a lot of great things about being a heretic,” said author of the popular Jesus Un series Keith Giles. “I’m not afraid of all those things I used to be afraid of. I have a lot more freedom.”

Leaving his fear-based Christianity took Giles some time. He grew up in Texas, the heart of the Bible belt, attending a denomination with strict doctrinal enforcement. One was either in or out depending on his or her beliefs. He bought the hermeneutic that used fear of eternal damnation as a motivator for church attendance, involvement, and giving. Meanwhile, he emerged as a leader, which naturally led to the pastorate.

“If you feel a call to minister, you have to become a pastor. There is just no other model,” Giles shared.

Giles was licensed and ordained as a minister by the denomination, but he would not stay there.

When he and his wife, Wendy, began visiting a different church with friends, their world started to open up. This new church valued the supernatural (without being weird) and social justice, which the couple found attractive. The change was refreshing, but a bigger one was coming.

While helping the poor, the Gileses began envisioning a church that would give away one hundred percent of the offering to help others. It was a radical idea that was not met with approval by church leadership. They did it anyway, serving the poor from their house church for the next eleven years.

During this season, another shift took place in Giles’ thinking that would bring about his final break with the rigid worldview of his upbringing. He stopped thinking about his faith as something for after death alone. Instead, he came to see it as an opportunity to make a difference for himself and others. “It rearranged all the spiritual furniture in my heart and mind,” he said.

He no longer focused on getting his theology ‘right,’ preferring instead to align his actions with his beliefs. “My Christianity shifted really quickly from being all about orthodoxy to orthopraxy: Am I experiencing transformation instead of information?” he explained.

This change had consequences from unexpected sources: people in his own faith tradition.

Others came out of the woodwork to criticize, and he started hearing the word “heretic.”

“It’s a threat when someone changes his mind,” he rationalized.

He recalled sitting in a Sunday service while his pastor preached a sermon against him.

“As I’m following Jesus more directly, I am suddenly being attacked by my brothers and sisters in the body of Christ for being a heretic… for doing exactly that,” Giles said. “That was really disheartening and shocking.”

Giles admits that, at first, he did not handle the opposition well. A passionate and persuasive person by nature, he came out of the gate trying to argue his way to acceptance—a strategy he found ineffective.

Instead, Giles shifted to what he considers a “multilayered” strategy.

First, he continues to share his message, but no longer argues about it with those who do not share his perspective. “It’s like bringing warm bread out of the oven,” he said. “I don’t need to be a bread salesman.” Rather, Giles chooses to engage with others, in a spirit of appreciation of differences and learning.

Second, in an age when the label no longer earns you a personal bonfire, Giles embraced the “heretic” label. “Anytime people call you a heretic, all they are really saying is, ‘I have a certain view of Christianity. You disagree with me on a couple of points, and that makes you a heretic.’ It’s just a way of attacking and dismissing people you disagree with.” 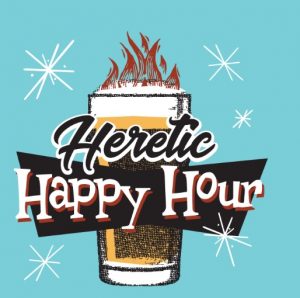 Embracing the label also meant giving his podcast a humorous name: The Heretic Happy Hour, complete with a logo featuring a flaming pint of beer.

While he is admittedly poking gentle fun at his critics, Giles genuinely cares for them and wants to be in conversation. He often engages with those he disagrees with online and on the podcast, another benefit of being a “heretic.”

“I can actually see other human beings as human beings. I don’t see them as lost or saved, Christian or non-Christian, or right or wrong,” he said. “I just see people as people God loves—people made in God’s image—who I love dearly, too.”

This love has empowered him to no longer be afraid of those who see the world differently. “I get to listen to people I disagree with, without feeling threatened. I’ve actually learned a whole lot from it,” Giles said.

The critics are still out there—look no further than the reviews of his books on Amazon to find them. Giles takes it in stride, though, knowing the conversation is just the beginning of the journey.

The 'Real' Zombie Apocalypse: How Kc Wayland Does Zombies

The Red Road: Amplifying Indigenous Voices Across the Globe