They were taking big chunks and shoving them in their mouths… they were like animals, and they sure as hell weren’t like us anymore—not with those eyes.

The next, he’s in the middle of the zombie apocalypse.

In the hot podcast, We’re Alive, produced by Wayland Production and created and written by Kc Wayland, life comes at you fast. 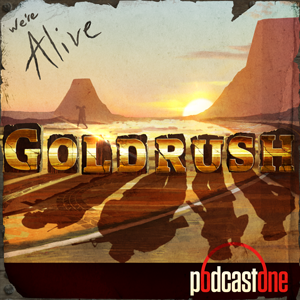 Debuting in 2009, We’re Alive recently hit the 200M-download mark. While the main story arc is wrapping up, there are spin-off shows as well, like Lockdown, Goldrush, and the newest addition, We’re Alive Descendants.

“It’s a really long-running serialized audio drama series that basically follows the survival of a bunch of characters through the zombie apocalypse in downtown Los Angeles,” said Wayland. “I think we’re up to about 60 hours of material now, over the course of the series, and we feature a total of 100 different voice actors.”

Wayland has, in his words, a very “weird” background. He was a broadcast engineer in the military, so he has a lot of knowledge about the technical side of things like satellite-transmission systems and computer-embedded systems. He also has a writing degree from Chapman University, and has written screenplays.

“When We’re Alive started, I was doing a lot of different stuff, including short films and documentary editing. One of the things that was limiting was being ‘stuck’ in the short story genre. I saw audio as an opportunity to be its own storytelling device. Back then, in 2009, podcasts were just barely on the cusp of coming out. I remember saying, ‘Oh, this is a great delivery medium!’ You can have an entire serialized show through the podcast download feed. And since it was public, anybody could download, which meant we now had the ability to get the show all over the world. Plus, you could do a really big story.”

“No one had done it yet; it was before The Walking Dead days. I was like, ‘Oh, I’ll start an audio drama!’ I wanted to do it in serialized fashion, thinking maybe it would be adapted for television one day. And then, the next year, The Walking Dead came out. At that point, we were doing such a great job in audio alone, which also gave us the ability to put the listener in any environment in the world. So, I figured why not just keep doing the audio, and build it from there?”

In case you’re under the impression We’re Alive is just like The Walking Dead, perish the thought.

“The interesting thing about our zombies—who we refer to as ‘infected’—is that once the infection gets into the body, the mind sort of takes a backseat. It’s like being in a theater, and having to watch what happens through the ‘eyes’ of the screen. Also, in our world, they retain a lot of the knowledge and intelligence they had before the infection. So, they’re smart. They actually lay traps, and some are so unique that they can communicate and orchestrate others. There’s a lot more complexity underneath the hood of the zombie cover. They are much more of an engaging enemy.

“I had watched other zombie shows, and the zombies were just rambling on, even if they were missing major muscle groups. They could still walk, and that didn’t work for me scientifically. I wanted to make them living, breathing creatures. If they bled out, they would die. If their airways were restricted, they would die. They would follow the mammalian traits we have as humans. In our story, the infected have so many capacities that the characters are continually trying to ‘one up.’ But the infected also continuously adapt to what the humans are doing. So, it evolved into a cat-and-mouse type game between the humans who are trying to survive and the infected who are trying to improve themselves.”

Needless to say, there is a lot of research behind a show that has lasted ten years and generated three spinoffs. Wayland goes the extra mile to ensure the whole series not only hangs together, but that it also actually ends with a satisfying conclusion.

“I have piles of hundreds of hundreds of pages of different story arcs and backgrounds,” said Wayland. “I’ve actually even had to do the math around the survival rate in different countries and the contributing factors that would affect the numbers of survivals. We have to pay attention to the details, because in this case, the number of survivors changes the environment and the equation of what happens.”

He brings that attention to detail to the audio side of the podcast, as well.

“There’s one thing I learned about audio from the animation field—when you record everyone separately, the chemistry is not the same. There’s a lot of energy mismatches. [With animation,] you sometimes have a visual, so you can make the separate recordings work with the visual as your guide. But with audio, the human ear can so easily detect things that don’t match or don’t work. So, I wanted to make this as genuine as possible by recording everyone at the same time. This way, all their mics match. The room atmospheres match. You don’t have to worry about the echo from one person’s room not matching the echo of another person’s room, thereby creating a mismatch.”

Because they are able to control these technical aspects, the actors can focus on making the scenes come to life. “The highly emotional scenes in the series are at that emotional level because the actors are right there with one another, and they have built relationships.”

Even the zombies were painstakingly researched. “We’ve meticulously designed each of the zombies. When you hear them calling in the distance, the calls themselves mean something. They are communicating with each other.

“Audio is one of the few mediums that don’t require sight. With a book or movie, a person has to use his or her eyes. This is the one medium that relies on you as a listener to fill in the blanks. Whatever you ‘see’ in your mind as you listen, the scariest monster, is the one we’ve created, which is kind of nice. It becomes like a participatory storytelling device—it’s not just what we do, but what the listener puts forward, as well.”

The Psychology Behind The Game: Applying Larger Fundamental Truths about Human Behavior in Gaming and Life