Jamie Madigan hosts The Psychology of Video Games Podcast—a somewhat unique entry in the Video Games category on iTunes, and well worth the listen. Airing monthly, it brings together experts from all aspects of the gaming industry to discuss how psychology applies to video games as a whole. Occasionally, the discussion will revolve around a popular game, like the longevity of Dungeons and Dragons, or the user experience behind Fortnite. Usually, though, episodes are based on the psychology of the games overall.

Jamie’s love of video games goes way back. “I grew up an arcade rat,” he said. “I played every day,” he said. Truth be told, not much has changed in that way; Jamie still plays weekly, if not daily.

His challenge, then, was to try to marry his love of video games with his fascination of psychology. To that end, Jamie earned a doctorate in the field of industrial organizational psychology, which basically means (as he puts it), “We make work suck less.” 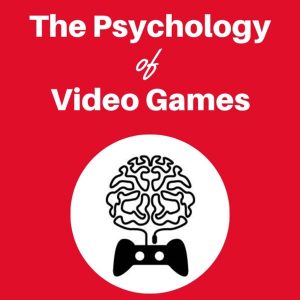 Meanwhile, Jamie began realizing that video games use the same systems in game after game, and players tend to behave the same way in all of them. Jamie also came to notice similarities in the way the games were marketed and sold. Eager to share the connections he was making, Jamie started blogging about six years ago. He quickly built an audience, and in 2015, The Psychology of Video Games Podcast was born as an outlet to provide high-quality content to his followers (“Truthfully,” Jamie said, “creating YouTube videos just seemed too hard!”).

Now, Jamie shares his views on video games and psychology being “a perfect match” with a much broader audience.

Episodes are not typical to podcasts found in the Video Games category. Whereas most other podcasts focus on specific games or game-related news, Jamie brings in experts in the field who have vast and differing experiences working in the world of video games to dive into the systems and “back ends” of the games they feature.

Most recently, Jamie interviewed an economics expert who went into the field because of a video game he played in high school. After discovering a work-around for buying and selling the tools needed to play the game, the expert used economics to “make more” in the game— setting up a co-op to build more tools. This earned him the title of “villain” in the game, but later, in college, he was encouraged to bring back the notes he took from that experience and use them in his work toward earning an economics degree.

In addition to the episodes that explore the mindset behind some of the more famous games, Jamie and his guests also investigate ramifications of video games, as exemplified in an interesting episode on avatars and our interpersonal relationship with them. The use of avatars from video games has now carried over into our everyday lives and digital world. How we form our personal avatars, and the care we take in doing so, stems from the video game’s ability to mold our avatars the way we see fit, along with the interaction we have with them.

Jamie also explained how video games are much more involved, psychologically speaking, than we may think:

“They actually employ social and cognitive psychology as well as consumer and industrial psychology. Our podcast covers all forms of psychology, as well as how video games can promote sound business principles in the way they are marketed and developed. Listening to many of the episodes will help business owners examine other aspects of their business in a new light. The podcast can also help calm parents’ fears about their overactive gaming children, and provide them with the ways in which the games might actually be good for them.”

When it comes to choosing his guests, Jamie looks for “academic types,” loving his conversations with “old-school academics” he often meets at conventions or reaches out to after reading academic journals.

“People love to talk about what they do,” Jamie said, and typically, “the researchers and behind-the-scenes types do not get to talk to their mainstream audience often.”

Jamie is a huge fan of listening to other podcasts, too. He keeps up with his industry by tuning in to a variety of game-related shows, including The Giant Bombcast and The Giant Beastcast. You Are Not So Smart is a psychology-related podcast hosted by David McRaney, and Work Life, hosted by Adam Grant (an industrial psychologist) are two more of his favorites. He also enjoys honing his writing skills by listening to #amwriting—a podcast co- hosted by Jessica Lahey, KJ Dell’Antonia, and Sarina Bowen.

For Jamie, podcasting has become even more than a medium to reach his audience. It’s opened the door to speaking engagements, panel discussions, and lectures at gaming conventions. Thankful for the time freedom it allows (being able to do what he wants with it on his own timeline), it has also led to the fulfillment of one of his bucket list items—his first traditionally published book entitled Getting Gamers – The Psychology of Video Games and the People Who Play Them.

Clearly, doing so sparked his writing flare even more, because his next book, The Engagement Game – How Your Workplace Culture Should be More Like a Video Game is set for release in August 2020. This one dives into what video games can teach about employee motivation and engagement, continuous improvement, and employee learning and professional development.

“My podcast has been great for building a platform for my books, too,” Jamie said. And it makes sense; with an impressive 4.9 out of 5-star Apple Podcast rating, avid listeners likely can’t wait to get their hands on Jamie’s books.

This gamer, expert, podcaster, author, and husband is also a dad to two avid video gaming fan daughters! His eldest enjoys online competitive games while his younger daughter loves the social aspects of the game play.

This Father’s Day, if he isn’t playing alongside his girls, you’ll likely find him spending quality family time watching movies and tv.

The 'Real' Zombie Apocalypse: How Kc Wayland Does Zombies