Terron Brooks is a singer-songwriter whose voice has been described by the Los Angeles Times as “smooth and soulful.” Ironically, he also has a knack for asking questions that reveal the heart and soul of some of entertainment’s biggest stars.

Guests who have already been featured on Honest Answers with Terron Brooks include Sheila E., LEON, Renée Elise Goldsberry, Rhona Bennett, Melinda Doolittle, and Crystal Lewis. And Terron has his sights set on Babyface, Toni Braxton, John Legend, and Smokey Robinson as ideal additions to this esteemed list.

He explained how the idea for the show came to fruition:

“I’ve learned that timing is key. It’s best to avoid forcing your plans. Just let things happen. I knew I wanted to do this podcast four or five years ago, but I got scared.

“I don’t think I would have started it if it wasn’t for the pandemic. It has allowed us to pause; otherwise, I would have been in the throes of doing whatever I would normally do.

“Not only did I have time and less of an excuse, but I also found that a lot of celebrities were available in a way they weren’t before.”

Terron is humbled by his experience with the show. “In my first season, when I didn’t really have a leg to stand on, it was amazing to have people like Sheila E. as guests.”

A two-time NAACP Award nominee, Terron is determined to make the most of every day—a refreshing trait in a time of uncertainty. This Daniel Craig fan, who also loves anything Marvel, is happy that he can now enjoy theaters once again with his movie-loving family: Leilani, wife of 18 years, 14-year-old Andrew, and 10-year-old Taylor. 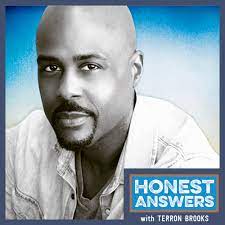 This native of Southern California has learned many lessons throughout his life and career.

“I almost lost my voice a couple of years ago. I underwent surgery because I had polyps on my throat, and I didn’t know if I would ever sing again.I healed, but in the process, I realized that my purpose is not singing or entertainment. It is inspiration. If I couldn’t do anything else, talking to people and encouraging them is what I would want to do.”

Terron readily credits those who have influenced him at various stages of his journey. Michael Jackson tops the list because of his commitment to forging a unique path. “Many of us are trying to change… to be somebody else… but there will never be another Michael Jackson.”

Crystal Lewis has also been an inspiration to Terron. A firm believer in the importance of letting others know how they have helped change your life, he is grateful to have had the opportunity to share that with her on his show.

“I used to try to put myself in a box. I thought about what people would want. Crystal has a voice that is uniquely her own. She used to sing Christian music back in the day, and she is one of the first in that genre to have her own record label. She did her own thing and made sacrifices even when she didn’t know if anybody was watching.

“You have to celebrate what you bring to the table and be more of who you are, crazy or not. There are people who encourage me to be more mysterious. They say I’m being too real… but I’ve been around too long to live my life the way someone else wants me to.”

His talents have extended to television, too—Terron played the role of Eddie Kendricks on the Emmy Award-winning NBC mini-series The Temptations. On set, LEON made a lasting impression on Terron.

“LEON seems mysterious, but in fact, he is gracious, kind, and open. He said, ‘In order for everyone to be great, you elevate the situation. You don’t just say, ‘Oh well, I’m gonna be great.’ While we were filming, LEON helped me see the greatness inside of me and showed me how to relax when we were doing the scenes, so I didn’t get in my head and dwell on the fact that he’s a star.”

Honest Answers with Terron Brooks allows listeners to get a behind-the-scenes listen to the candid conversations between Terron and stars like LEON as they go deep.

“It has become clear that many of my guests view themselves as spiritual beings… not just human beings who do what we do. Every guest has organically talked about his or her faith,” Terron revealed.

He described how it feels to speak from the heart and invite his guests to do the same:

“It feels purposeful. Beyond wearing different hats, as some other artists do, I want every endeavor to be an extension of what I do. I’m always listening. That’s how you discover your purpose. I want to inspire, whether through film or song. If it’s inspiring, I’ll do it.”

For aspiring podcasters, Terron had a piece of advice to share. “Trust that you are enough, and there is a specific lane just for you. Lean into that lane, and bring that to the podcast world. Just start it, but don’t force anything. Make sure you’re enjoying what you’re doing, yet don’t be afraid to pivot. Good things will come to you.”

It is clear that Terron Brooks loves the journey of expressing his authentic self and encouraging his listeners to do the same. Check out Honest Answers to “reconnect to the soul,” and be sure to watch for Terron’s new album, The Soul Of Broadway Deluxe, in early February, 2022.