With the holidays upon us, many of us look deeper at our faith… even calling upon it. For podcasters in the True Crime Category, though, doing so can be a bit more difficult. Simply put, there’s a lot of evil in this world—more than some would like to admit—and covering these cases can be troubling.

But for those whose faith is strong, it may be a little easier to clearly see the light through the darkness. Such is the case for Lori Morrison, who created what is quite possibly the first and only faith-based true-crime podcast, The Unlovely Truth.

Lori is a private investigator by trade. One might think a PI who was compelled to launch a podcast might create something traditional in the True Crime space… maybe something about missing persons, or a look back at her own tough cases. Maybe she’d combine a true-crime podcast with other categories like History, News, or even Comedy, like many podcasters do.

Her strong faith compelled her to create something different—something authentically and uniquely her.

She delved into the genesis of what would become The Unlovely Truth during a recent interview with Podcast Magazine®.

“Like most things, it was a journey,” Lori reminisced. “I’m a licensed private investigator, and one of my mentors has her own podcast. She started it to drive tips to her cold cases. We were on a plane coming back from an investigation we were working on together when we talked about her show and how it moved some of her cases forward.”

This shed light on the absence of podcasts by PIs, despite the attention the medium can bring to a case AND how it can support and enhance the PI’s business.

As the discussion between mentor and mentee continued, Lori remembers commenting, “They can’t all be the same. Somebody needs to do a true-crime book-review podcast.”

Her mentor smiled and said, “Well Lori, that’s your podcast.”

The seed was planted. Next, Lori mulled the idea over with a friend who offered some important insight:

“She said, ‘There’s a lot of noise in the true-crime genre. You need something that will make your podcast stand out and be different. Being a PI makes you a little different, but the thing about you that I don’t see anywhere is the biggest part of who you are—your faith.’ That resonated. It just made sense.”

By adding The Unlovely Truth to her business, Lori tapped into her original mission.

“When I got into being a PI, it was in large part because I was trying to find a way to make a bigger difference than I felt I was making in my job as a paralegal at the time,” she recalled. As she searched for resources and guidance around starting a faith-based true-crime podcast, she couldn’t find anything useful. So, she decided to be that resource, figuring:

“There’s got to be other people out there like me who love the genre, are solid in their faith, and want to make a difference, too, but don’t know how. That’s part of what I try to do,” Lori continued. “Tell the stories, because everybody’s story is important. I try to drive some resources to cold cases and missing persons cases. And I try to encourage people to get involved—I describe it as getting out of the audience and into the action, without doing something crazy like getting your PI license like I did. There are easier ways.” She finished with a big grin.

It would be easy to say The Unlovely Truth is simply different, but that wouldn’t do it justice. In a space where so many true-crime shows are highly entertaining and serve a purpose but are also shocking and disturbing much of the time, Lori offers a program that is more like a warm blanket.

One of her themes that contributes to that feeling is forgiveness. When asked if a comforting emotion was an intended effect, she replied with a laugh:

“That’s kinda one of those happy accidents.”

Continuing on the idea of forgiveness, Lori shared a comment from one of her listeners. “She reached out to say, ‘I had never heard the forgiveness process phrased the way your guest described it. Now, I get it.’ If that is a benefit, too, I absolutely love it.

“Sometimes in church, we shy away from the harder topics,” Lori elaborated. “But they’re so important. Not only forgiveness, but also redemption. We talked in one episode early on about vigilantism, because our book that week was about a guy who had terrorized an entire community for decades. Finally, someone shot him right on Main Street in the middle of the day. Dozens of people witnessed it, yet everyone said, ‘Well, I didn’t see anything.’ 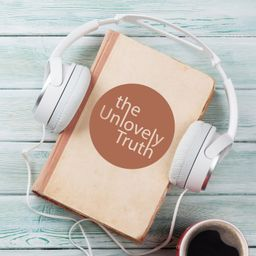 “So, I had a pastor on, and we questioned whether that is ok. Because law enforcement had failed in that community for years, I think people were really afraid. He really was awful and very violent. So, is it acceptable to take matters into your own hands to save other people? I want people to wrestle with those questions, because these things can happen to us. You never know when a situation like this is going to engulf you. Being prepared and able to help others when someone in your circle of influence gets caught up in something—knowing how to help and counsel and guide them—is important.”

It’s also important to understand that a podcast in and of itself is not a business, notwithstanding some very rare and well-known exceptions, of course. However, a podcast is often a wise tactic to enhance a business.

“The Unlovely Truth has done that in ways I didn’t expect,” Lori admitted. “In most jurisdictions, you have to be licensed to do private investigation work. I’m licensed in limited jurisdictions. Even though the podcast is nationwide, and even worldwide, I am only going to be able to work within my jurisdiction. So, I didn’t think the show would draw a lot of cases to me, which is ok, because that really isn’t my primary purpose.

“What it has done is open up speaking opportunities. That certainly wasn’t my aim when I started, but since one of my goals is to encourage and hopefully inspire others, speaking is a natural step. Am I in it for the money? No. Do I have to pay my bills? Yes. So, I try to strike a good balance between making enough money to have a business and serving people.”

The Unlovely Truth does share one common purpose with many other true-crime podcasts: to keep cases alive in the public and help solve them.

“My number-one main goal—I will be so thrilled if this ever happens—is for someone to come forward on a cold case after hearing my show with information that resolves a case. That’s like the Holy Grail. I would love for that to happen someday.”

It wouldn’t be surprising at all to see Lori’s wish come true. The True Crime Category is more than entertainment. These podcasts play a very important role in society, helping solve cases more and more often.

“Being a PI, I work with a lot of victims,” Lori explained. “When you have to put your arms around someone who is crying uncontrollably… when you have to give her news she didn’t want to hear… when you have tried to walk the judicial process with her, and it’s not providing the desired outcome… that’s tough.

“In one of my favorite episodes, I was talking to a mother of a murder victim. She had actually gone on to become a victims’ advocate in a national organization. She was working with families walking the same road she had. I asked her, ‘How hard is that for you? Does that bring up your own tragedy so much that it’s just really difficult?’ I’ll never forget what she said: ‘Oh, it heals my heart.’ I thought, ‘Wow!’ To be able to get to that space after what she’s gone through is inspiring.”

“That’s what I want to do. I want to encourage people. Even if you haven’t been through that trauma, and you just have a heart for people who are suffering. Or if you have a heart for righting wrongs and setting things right… there are ways you can help, and I want to give people that encouragement and the tools to say, ‘Let’s go!’ Someone has to stand up and do more, or these problems aren’t going to get fixed.’”

It certainly seems like Lori is doing just that. For the many true-crime fans out there who just need a break from the valuable but often harsh podcasts in the category, check out The Unlovely Truth. It may be the podcast version of a warm blanket that you and your faith need this holiday season.

Terron Brooks: Leading with his Heart