During the Halloween season, many kids and adults alike enjoy dressing up as their favorite monsters. Those from older generations may gravitate toward traditional monsters, such as the Wolfman or Dracula. Those from Generation X may have a connection to Freddy Krueger or Jason Voorhees, as they fondly remember sneaking off with their friends when they were younger to watch the latest Nightmare on Elm Street or Friday the 13th movie. And just about anyone of any age can recognize Michael Myers, since he seems to somehow remain alive to terrorize us in a new Halloween movie every decade since the 70s.

Unfortunately, though, monsters of reality are a lot scarier than those in film. Worse yet, this particular type of evil tends to hit not just in the darkness of Halloween night, but 365 days a year.

No one understands that better than a law-enforcement family, which includes the hosts of Paradise After Dark, Lauren and Ken. Lauren was a police officer in the Navy. Ken is the son of a K9 cop, and his experience as such spiked his interest in crime from early childhood well into adulthood.

Lauren and Ken live in Southwest Florida, an area that the media often portrays as paradise. Yet considering the crimes that take place there after the sun goes down, the truth is, the region is anything but.

The couple wanted to bring more attention to many of their local, monstrous cases. Thus, in March 2018, the Paradise After Dark podcast was born.

Podcast Magazine® caught up with these co-hosts earlier this year at CrimeCon. The first question may seem obvious; it revolved around their choice of title, which could land the podcast in a number of different genres: True Crime, Horror, and S&M.

“We get that all the time,” laughs Ken.

“We actually get the question, ‘Is your podcast about sex?’” chimes in Lauren.

The pair is happy that the name and the logo get attention and spark conversation, though. Ken’s go-to response to anyone who asks is to quickly point out that it is NOT about sex. Then, if available, he’ll point to the podcast logo and say, “Do you see the giant hatchet?!” But more on that later.

As is the case with many podcasts, Paradise After Dark started as a hobby.

“The area where we live in Southwest Florida is a very high-end, wealthy, retirement type of area,” Lauren shares. “But the thing is, stuff happens here. There’s crime; there are murders; there’s all that. But the papers don’t really cover it.”

“It may be on page seven or nine,” Ken adds.

“I remember a lawyer who was murdered in his office. Someone just walked in and shot him. To this day, I can’t find any information on it other than this little blurb that basically said, ‘So-and-so was murdered.’”

Despite being advertised as “paradise,” Lauren and Ken can’t help but question what happens after dark.

“You’ll never hear about it during the day. It all happens at night,” Ken continues. “This is the reality of what happens in paradise after dark, and that’s how we came up with the name.”

Lauren can not only take credit for choosing the name, but also for coercing her husband into doing the podcast with her.

“Lauren forced me to get into podcasting,” Ken laughs.

“Oh, I’m sorry that we are now sitting here getting an interview with Podcast Magazine!” Lauren replied in a half-joking, half-snarky manner.

Truth is, Ken quickly became a willing participant in what is now a quality and popular show. When they published their first episode, it garnered 80 downloads the first week.

Whether 79 of those 80 listeners initially thought it was a sex podcast or not, Ken was “onboard.”

“All of a sudden, it took off,” Ken explains. “We have listeners who started with the first episode and have not stopped. That’s really cool. We still get messages from our original listeners.”

When it comes to a fascination with True Crime, Lauren goes back to her childhood, too. “I’ve always been a true-crime junkie,” she confesses. “I read Mindhunter when I was about 14, and I started watching Forensic Files when I was about 12. My goal in life was to be in the FBI’s behavioral science unit. That’s why I joined the military as a cop. But, life happens.”

The FBI’s loss is the True Crime Category’s gain.

Ken had a similar fascination with watching shows like Forensic Files, Unsolved Mysteries, America’s Most Wanted, and the like as a child, alongside his father. So, when Ken met Lauren, they immediately recognized each other as kindred spirits. “We would watch Forensic Files before we went to bed,” Lauren shares.

Their mutual fascination eventually led to a podcast that offers a buffet of case coverage any true-crime enthusiast would find appetizing, including murder, unsolved mysteries, missing people, and urban legends. While they certainly have some fun with the urban legends, given their background, they are very aware that they need to treat the true-crime cases they cover with care. 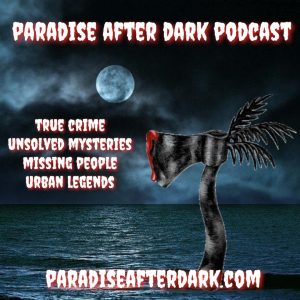 “When you’re doing true crime, you have to be really careful how you approach it and what you say,” Ken explains. “You don’t want to be disrespectful to the family or the victim. You also don’t want to suggest anyone is guilty when they’re not.”

Lauren gravitates toward unsolved mysteries. “I like to cover unsolved cases and missing people,” she admits. “I like to think that maybe, we’re helping.”

This intention speaks to a common theme in these articles now going back over two years—the True Crime Category is about more than entertainment. It serves as a service to society, keeping cases alive that deserve to stay alive in the public eye and educating people about them.

“We speak to a lot of family members,” Lauren continues. “Sometimes, we have them on the show. They are always so grateful that we’re taking the time to help their loved one and keep putting the word out.”

Ken tends to lean more toward the urban legends. They admit that, as deep as they dive into some of the true-crime cases, the myths—especially the craziest ones—tend to provide some much-needed comic relief. “Urban legends are different. You don’t have to be as serious,” Ken points out. “With those, I’m ready to rock and roll.”

Which brings us back to the bloody hatchet in the podcast logo. “It’s a funny story,” Lauren begins.

Apparently, Lauren made the first attempt at a logo by drawing it on her phone. It was a “squallie,” which, in essence, is a pig person. It was also the subject of their initial episode. Fortunately, it didn’t become the podcast’s permanent logo. However, fans can still go to the store on the Paradise After Dark website and buy shirts featuring that very drawing (just search for “Squallie Buff” or “Short-Sleeve Unisex Squallie T-Shirt”).

Fortunately, a listener who is also an artist unintentionally came to the rescue.

“She said, ‘When I listen to your show, this is what I imagine,’” Ken reveals.

“This was early on, and we just loved it. We asked her if we could use it, and she said yes,” Lauren adds.

Another listener actually named the hatchet a “palmahawk,” as it’s a cross between a tomahawk and a palm tree.

Needless to say, Lauren (and probably Ken, as well) are much better podcast hosts than they are artists. Fans of Paradise After Dark need to thank that artist for the vast improvement to their logo.

In a world of unsolved mysteries, missing persons, and plenty of crime, the real myth may be that there is a paradise anywhere on Earth. We don’t need Freddy Kruger, Jason Voorhees, or Michael Myers to be real this Halloween. We have plenty of real monsters running around after dark.

Just ask Lauren and Ken, who will tell you all about the ones in Florida alone.