It’s not often that I listen to the first episode of a podcast and think, “I absolutely need to cover this show!” Come to think of it, that has never happened… until I heard the first five minutes of Strictly Stalking.

I have come to believe that the best true-crime podcasts not only entertain, but also provide a service. That is exactly what co-hosts Jaimie Beebe and Jake Deptula are doing for stalking victims with their show.

They certainly are covering a niche in the True Crime Category like no one else has. So, I had to ask them how they came up with the idea of doing a podcast specifically on stalkers.

Jake tells the story of how his colleague Jaimie called to say she wanted to do a true-crime podcast, but all of the angles seemed to be taken already. That’s when Jake suggested they focus on stalking.

“When we took a deep dive into it, we found that the subject was underserved,” Jake continued. “There’s a lot of people talking about other crimes, but not stalking, for some reason. When we pitched the idea to Kast Media, an amazing company, we realized there are some incredible stories out there, and many of them are still ongoing.”

Jake went on to explain the unfortunate nature of stalking regarding the victims. “Once you are stalked, there isn’t always an end to it. The stalker isn’t necessarily stopped once you get the restraining order, or once the police are involved, or even when they get jailtime. We realized that, within that thread, we could bring awareness to stalking, give victims a voice, and create a community.”

“Once we got into it, the show took on a life of its own,” added Jaimie. “At first, we didn’t realize that we can actually make a difference. We’re actually helping people. We’re trying to change some laws now. The show took on a whole different meaning since the day we said, ‘Yeah, let’s do a podcast.’” 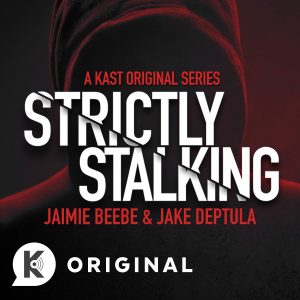 “What I find really fascinating about this podcast is the immediacy of the coverage of the stories. Ultimately, we help victims bring awareness to this particular crime and justice to these cases,” Jake elaborated. “We’re not covering cases that have already been reported on a thousand times. Once we built the framework and realized this is something that would really help people, we had a mission. This is really a platform for victims. It’s a safe platform for survivors of this horrible crime.”

I mentioned to Jaimie and Jake that while I certainly was aware of the seriousness of the crime, I never really knew the lengths some stalkers will go to.

“It’s crazy how it happens, especially in relationship cases,” Jaimie responded. “You’re dating someone. You stop. You think it’s over. And then he or she is literally stalking you. Sometimes, there are red flags, but not always.”

“Most of the time, the stalker is someone who is familiar with the victim or survivor,” commented Jake on the nature of the cases they have covered. “In reality, many times it is someone close to you, like a former partner in a relationship, a current partner, a relative, or a classmate.”

As listeners dig into the episodes of Strictly Stalking, they quickly learn that this crime takes on many forms, from cyberbullying to psychological abuse to physical violence. “We have now covered over 50 stories, and not one of them is identical,” Jake pointed out. “Every one has different circumstances. There’s not a complete pattern. It’s very hard to profile a stalker.”

Jaimie and Jake have not only become fast experts on the crime of stalking, but they’ve also developed an impressive rapport that adds to the entertainment value of the show.

The two originally met when Jake was producing a film for Lifetime and hired Jaimie to do the casting. They developed a strong working relationship on that project, and then, as Jaimie put it, “We started talking about murder and stuff.”

If it wasn’t clear from listening to Strictly Stalking how well these two work together and get along, it was definitely apparent after speaking with them for more than an hour.

“We’re such a great team, because we’re opposites,” Jaimie explained, and admitted to being the impulsive one on the team.

“I like to process things,” Jake reacted. “Jaimie is the fun and free-wheeling one, and I’m the formal one.”

“He teaches me a lot… when I listen,” Jaimie quipped. Jake laughed and shared a couple of funny stories about the podcast projects they are working on.

The collegial ribbing these two give each other speaks to their great rapport, as exemplified by Jaimie’s comment in the middle of our interview, “Great answer, Jake. Long, but great.”

While they are able to joke with each other, they take their work and the interviews they conduct with survivors of stalking very seriously. “There’s an organization we work with called SPARC, which stands for Stalking Prevention and Resource Center,” said Jake. “They provide seminars to train institutions and law enforcement on how to deal with stalking on many levels, and they’re going to train us.”

Although there are resources available for victims of stalking, Jake and Jaimie suggest starting with local police. “The best thing to do is get [the stalking incident] on record,” stated Jake. “If you have that feeling, if you have that intuition, get it documented. I am all about caution over courtesy. That is literally the mandate for our podcast. Nobody wants to be sucker punched.” Unfortunately, that is both literal and figurative when it comes to the crime of stalking.

“When I began to discover the resources available to victims of stalking, it surprised me to find that many times, the organizations that deal with domestic violence can offer the most help,” Jaimie commented. She pointed out that this is the case even if it is a neighbor doing the stalking. “They have a lot of advocates there,” she said, referring to the many places that help victims of domestic violence.

Stalking victims clearly have two advocates in Jaimie Beebe and Jake Deptula. Whether you listen to Strictly Stalking as entertainment or to learn more about this crime, this podcast is truly a resource in and of itself. I applaud them for not only producing a quality show, but also for providing a valuable service to society.

Who Are The People In Your Neighborhood?