Just Ask Tom Simes Of The Business Of Comedy

It’s easy to look at comedians, actors, screenwriters, and other professionals in the arts and assume how fun and glamorous it must be to be them.

What we don’t see, though, is the harsh reality of these professions.

The fact is, comedy can be brutal. Oftentimes, it’s unprofitable. Case in point: Sebastian Maniscalco spent years waiting tables in Los Angeles and sneaking away to open-mic nights before he was selling out The Forum and the United Center as he does today.

No one knows about the harsh realities of this industry better than Tom Simes, host of The Business of Comedy. As not only a podcaster, but also a former comedian and current comedy-club owner, he offers a unique perspective.

Tom shared some of that perspective with Podcast Magazine®, including his motivation for creating a podcast to talk about the business side of comedy.

“I was talking shop to another club owner,” Tom reminisces. “We were venting about comedians, or something to that effect. I remember thinking to myself that when I was a comedian looking for work, I would have loved to have been a fly on the wall for this type of conversation, seeing things from the club owner’s vantage point. That got me thinking about doing a podcast to help comedians understand the business side of comedy and how club owners think about things.” 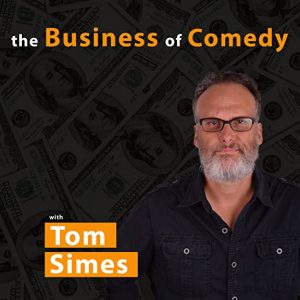 From both the podcast and the conversation, it became quite evident that there are many comedians who are good at their craft, but not so good at the business side and general management of their career. “It’s both an artform and a business,” Tom reiterates.

“Frankly, I didn’t realize how many comedians there are until I opened a comedy club,” he confesses. “Comedy is a very crowded field. Any piece of advice can help a comedian. It’s the little details that can make a difference, especially when reaching out to a club.”

Not surprisingly, advice around booking emails is one of the requests Tom gets the most. True to Tom’s sincere desire to help those in the comedy industry, episode 46 is dedicated entirely to answering it.

“I often joke that one day, I’m going to put together a coffee table book full of bad booking emails,” Tom laughs. “Some of the ones I get are just ridiculous.”

To that point, one of Tom’s biggest pieces of advice is this:

Professionalism obviously also applies to the comedian’s behavior in the club, among other comics. That’s why one of Tom’s most popular episodes, #39, which originated following an “episode” in Tom’s club, is on green-room etiquette. “How you behave in the green room can basically blacklist you,” Tom bluntly explains. “When I travel, this is the episode listeners repeatedly bring up when I meet them.

“I’ll talk about anything that is going to help comedians in their endeavors,” shares Tom. “When it comes to trying to get booked, it’s easy to drop the ball. It’s hard enough to be funny, but then you have to get booked, too. When I was a comedian, I faced the same issues. Now, I see it from the club-ownership side of things. My podcast hopefully helps people out a little bit.”

Though Tom is a fan of podcasts, he admits he doesn’t have the time to listen to every show he subscribes to. Likewise, he tries to keep episodes short, sometimes as brief as 15 minutes. “I keep the interviews very short and very on point. Nobody needs to listen to me pontificate on things,” he says half-jokingly. “This way, listeners can knock out an episode on the way to work.”

By its nature, The Business of Comedy is topic-based. “One of the hardest aspects of the podcast is finding a topic that’s relevant to comics along with an expert to talk about it,” Tom reveals. This is certainly a common problem for many podcasters, but it speaks to Tom’s desire to produce a quality product.

While Tom enjoys listening to podcasts and producing his, he is first and foremost a club owner. His desire to open his own club was nurtured as he moved from comedian to production.

As many entrepreneurial pursuits come to fruition, this one was also born out of a desire and a conversation. “I was speaking with some friends who own bars and restaurants and casually mentioned that I would like to open a club someday,” Tom remembers. The response from his friends: “Yeah, you should totally do that!”

“The next thing I know, we’re opening a club,” Tom laughs.

Sometimes, you just need a couple of entrepreneurially minded friends to push you off that cliff and into the deep water.

Tom derives much enjoyment from his interviews. “I enjoy talking about the business of comedy, and I enjoy talking to people in the business,” he shares. “One person even came to the club to meet me just because he liked the podcast so much.”

While Tom didn’t mention if this raving fan lived near Glendale, AZ, where his club is or came from thousands of miles away to meet him, that is proof enough that people are enjoying his podcast, and that it is reaching the right listeners.

“It’s fun for me,” Tom states simply. “Hopefully, it is helping comics out there, too, and giving them what they need.”

If you’re in the business and want to learn more, or if you just have an interest in this particular industry, check out The Business of Comedy podcast. As Tom would probably tell you, it’s a tough business, and those in it need to stick together.