What drives you to drink? Perhaps a joyous celebration, a painful breakup, or (most certainly) a pandemic. We all have secret triggers that tempt us to the bottle, and for best friends Christine Schiefer and Em Schulz, it’s the strangely compelling and surprisingly hilarious stories of the paranormal, the conspiracy, and the cold case.

A little liquid courage, even if it’s some sweet tea or a milkshake, certainly helps And That’s Why We Drink co-hosts Christine and Em confront demons, haunted dolls, black-eyed children, aliens, and all things urban folklore and true crime with infectious humor and camaraderie.

Schiefer and Schulz say they first started hanging out and sharing spooky stories in Los Angeles. They hadn’t run in the same circles back in grad school, and both say they were lonely in LA. “I realized I didn’t know anybody, so I texted her,” says Schulz, “and asked if she wanted to come to a harvest festival.”

Who knew a popular podcast with more than 80 million downloads and a 2019 People’s Voice “Webby” award for Best Comedy Podcast would come from their awkward “first date” on a tractor?

With nothing much to say to each other, they started exploring each other’s social media profiles and soon realized they shared an interest in true crimes and ghosts. “We started talking about it right then and there, and Christine said, ‘Well, I listen to some really good true-crime podcasts.’ And I said, ‘What’s a podcast?’ Christine introduced me to the medium and showed me her favorite ones, and within two or three months, we became best friends just by having that connection.”

Schulz says Schiefer introduced her to Jim Harold’s Campfire—and before long, inspiration hit. “I thought,” says Schulz, “if all we ever do now is talk about ghosts, why don’t we do it on air?

“When we had our first meeting, at about 2 AM that night, we stopped working and were just talking and complaining about something. I sarcastically said, ‘And that’s why we drink.’ We immediately were like, ‘Oh, that’s it!”

Once their podcast started airing, the friendship was sealed. “Truly, our audience has grown with our friendship,” Schulz shared.

“I’ll give you a good example,” says Schiefer. “In one of our early episodes, I found out Em had graduated from ‘clown college’ when she was 13. We were doing a John Wayne Gacy episode, and I was totally flabbergasted. Our audience found that out right when I did; it’s funny how they were on the ride right along with us.”

It turns out Schiefer was a private eye with a journalism degree. She was working at an investigations company while Schulz had moonlighted as a paranormal investigator. Having experienced ghosts and entities around her since she was three years old, Schulz says, “I don’t know how to explain it to people who haven’t experienced it. Some were aggressive, ominous. And I’ve also seen some wonderful spirits, like my grandfather a week after he passed.” 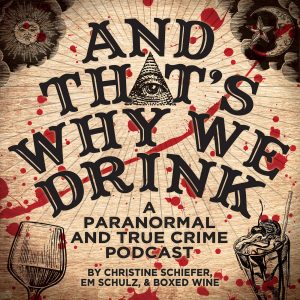 “It was easy to swap stories,” Schultz continued. She is the expert on poltergeists, ghosts, demons, and even some crazy conspiracy theories, while Schiefer digs deep into grisly murders, kidnappings, and disappearances. “These things flow so well together. They’re spooky and mysterious. The comedy aspect came naturally due to the fact that we didn’t know how to have conversations about these topics without awkwardly laughing at how terrible they are. I think it just became this weird trifecta of perfect content.”

Often, the best podcasts make the listener feel like a “fly on the wall” as they listen in on intimate conversation. “Part of the reason it’s successful is that the show is an exact reflection of the conversations we have away from a microphone,” says Schiefer. “I was asking Em a million questions about ghost hunting, because I just found it so fascinating. Then, Em was asking me about some weird stories about our house being burglarized when I was growing up. I think it just was a very natural progression into telling the stories in front of a mic.”

That’s Why I Drink quickly gained popularity, and then, the audience started sending in their own stories. “We were like, ‘Thank God we’re not the only two weirdos who think this is fascinating,’” laughs Schiefer.

As time went on, the hosts started to rely more and more on listener suggestions.

They say one of their favorite episodes is “Glitch in the Matrix,” which is about a middle-aged computer programmer who woke up one day and was 14 years old again. “He still had the memory of his whole life, and his computer studies. His teachers wondered how he knew so much,” says Schulz. “It was so creepy.”

Says Schiefer, “I was super hesitant at first about covering that one. I had to check Reddit to make sure it wasn’t some clearly fake story shared all over the Internet. It sounded creepy, but fake, and then I spent two hours researching, and I couldn’t find anything at all claiming it wasn’t real. So, we decided to go with it.”

There’s never a shortage of material for the two to explore, especially now in the age of rampant conspiracy theories. Schiefer says she feels like she’s sometimes “walking on eggshells,” because everything has become so politicized. “It’s a fine line, because we don’t want to offend anyone. The fact that we don’t really know what the answer is makes for good lighthearted banter. Our conspiracy episodes get some of the best responses probably because we’re trying to figure out the mystery ourselves as it’s happening, as opposed to talking about it in black and white.”

It can be hard, especially with true crime and cold cases, she says, because “They’re real people, real families, and real victims, so I do my due diligence.”

While Schiefer digs deep into research and fact checking, Schulz says she “believes around 90%” of the paranormal or demonic stories she tells. “Even if they’ve been exaggerated, I think there’s some truth in most of them. My favorite story is the time travel and teleportation experiments of Project Pegasus. I know a lot of it sounds crazy, but I don’t care.”

The project, or so the story goes, involved a total of 140 children who would go on to become “America’s first generation of chrononauts.” Washington-based attorney Andrew D. Basiago claimed that from 1968 to 1972, he’d participated in a number of bizarre experiments as a young child that took him on journeys through time, space, and potentially, into parallel universes.

And That’s Why I Drink grew into a popular live show, touring on and off since 2018, before the Coronavirus brought their tour to a screeching halt. “We’re fortunate that our ‘bread and butter’ is working from home, so it hasn’t affected us too badly,” says Schiefer.

The bigger challenge is finding humor in the world right now. “So many eyes are watching us during a very non-funny time,” says Schultz. “We don’t want to be silent during really important issues, but we also don’t want to step out of line and say things when it’s not our place.”

Wondering where is best to start listening to And That’s Why I Drink, a glass of wine (or something stronger) in hand?

“Start from the beginning,” says Schulz, “because you’re going to hear two strangers become best friends, along with the creation of some very weird inside jokes that you won’t understand if you start on the other side.”