“He called me—weirdly—and asked me on a date,” reflects Suzanne Stabile. “At forty, he’d never been on a date before.”

Suzanne met her husband Joe while teaching senior theology at a Roman Catholic high school where he was the parish priest. He had already moved on when a tragedy at the school left seniors without answers to life’s hardest questions. They wondered where God was while they suffered.

Suzanne called Joe and asked him to come speak to the students, which he did, patiently answering their questions until they could function again.

Later, Joe was once again appointed to Suzanne’s parish, and she asked him to teach a class with her. He was reluctant because it was a busy time of year, but she persisted until he relented. That’s when they learned something unexpected:

“As it turned out, he and I have some kind of magic, teaching together,” Suzanne remembers fondly. Word got out, and class enrollment grew into the hundreds.

It wasn’t long before Joe called Suzanne to ask her to be his first date. She accepted, and before long, their friendship blossomed into love. “We discovered what my mother said she knew—I don’t know who else knew, but we didn’t know—that we were really in love with one another. So, we got married,” she says.

But leaving the priesthood was painful, and it left the Stabiles looking for a place to process the hurt. Joe had read Richard Rohr, and one day called his Center for Action and Contemplation in Albuquerque. They set up an appointment to visit.

Rohr ended up handing Suzanne a copy of The Enneagram: A Christian Perspective because he thought she might enjoy it. She loved learning about the nine types of people so much that she started the book over again immediately after finishing it. “Nothing surprised me the second time. It was like I didn’t forget anything,” she remembers. 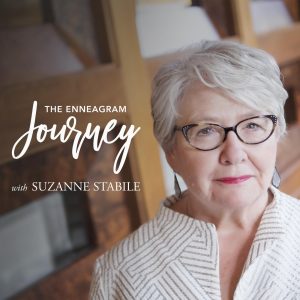 The Enneagram is an ancient way of understanding personality and motivation, though it goes much deeper than that. “We have to define the Enneagram as nine ways of seeing. We can all be in the same room and see it nine different ways,” Suzanne explains.

Rohr could see that she understood the Enneagram intuitively and issued an odd challenge: to not talk about it for five years. “I had so much respect for him that I just did it,” she says. However, she did study every book on the subject she could find.

The following season, Rohr told Suzanne that it was time to try teaching.

That was 30 years ago, and she’s been teaching the Enneagram ever since.

The Enneagram has become a very popular topic as demonstrated by the high ranking of Suzanne’s podcast, The Enneagram Journey. She believes there are two reasons for this:

First, “I teach what people most want to know about, which is themselves,” she says.

Second, many people learn not to be themselves as they grow up. “We start out very early being told not to be who we are,” Suzanne explains. “The people around us who provided us with safety as children were very likely not our same Enneagram number.” The Enneagram offers the first measure of understanding of self that some people receive.

But not everyone is enthusiastic about the Enneagram. In some more conservative Christian traditions, it is considered dangerous because of its distant origins. “The dangerous thing about it is to take it for more than it is,” counters Suzanne. “It’s just one thing. It’s much better if it’s practiced with other spiritual practices and disciplines.”

Suzanne recommends that people who want to explore the Enneagram seek support, as it is “solitary work that cannot be done alone.” To know oneself requires a committed and honest community. “If you want to do the work of self-awareness, self-understanding, and transformation, you need others to hold your feet to the fire, because it’s too easy to take the short cut,” she explains.

Suzanne’s podcast “helps people to understand Enneagram in ways they can’t at a big event. Because we are going deeper,” she shares.

For example (and for your reading pleasure!), following is Suzanne’s summary of how each Enneagram type may have experienced the pandemic:

Type 1: The Perfectionist – Fixed up everything in their house within a few months and then had to face what’s wrong with themselves.

Type 2: The Helper – Saw many opportunities to help others and loved it. May have struggled with lack of feedback.

Type 3: The Performer – Found it difficult to meet their goals and had to find new ways to set and achieve them. Experienced way more feelings than they would like and learned to deal with them.

Type 4: The Romantic – Naturally tending toward melancholy, may have experienced more depression during the pandemic. May have struggled with the fact that their creativity could not be seen.

Type 5: The Investigator – Felt misunderstood by people who think their personality loved being in lockdown. May feel less comfortable in the world now.

Type 6: The Loyalist – Most prepared type of all, but since they did not expect it to last so long, their plans fell apart, and they had to rebuild their feeling of competency by rebuilding their plan.

Type 7: The Enthusiast – Their unusual ability to entertain themselves ran out three to four months in. Had an opportunity to embrace less happy emotions if they were willing to.

Type 8: The Challenger – They were angry that everything shut down early on. May have been told they were difficult by those around them.

Type 9: The Peacemaker – Went with it even though it wasn’t great. Did what they could whenever they could.

Suzanne describes podcasting as a “more intimate and in-depth forum” than she usually has access to, and says she loves the feedback from people who can’t get to workshops with her, because it helps her know others better.

“Conversation will heal the world—the whole world—if we could just get to know one another through it.”

Brains On: An Award Winning Podcast