Over the last several years, cybersecurity podcasts have been on the rise as threats have escalated around the world. No longer relegated to only those “in the know,” cybersecurity has become a relevant and ever-present aspect of the day-to-day consciousness of anyone who uses a device. And as smart devices creep into our homes via appliances, lightbulbs, doorbell cams, and even medical devices like pacemakers, the threat of a hack is everywhere.

Enter Smashing Security, a U.K.-based show that has taken on the world of podcasts and won. Having generated close to seven million downloads, this is not just a ‘geek-to-geek’ show. Rather, as host Graham Cluley says, “It is a show for everyone, because cybersecurity affects geeks and non-geeks alike.”

A massive fan of the show Doctor Who, Graham has a bit of the Doctor in him. The TARDIS could almost be a metaphor for how vast the world of cybersecurity is and how small it seems to the outsider. (If you don’t know what the TARDIS is, or Doctor Who, just Google it… or, email Graham, and he will gladly enlighten you.)

Graham and his co-host, Carole Theriault, have worked together in one capacity or another for over a decade. They also had a third co-host, Vanja Svajcer, for ten episodes, but he changed jobs, and the new company wanted oversight of the show in order for him to appear. Believe it or not, that happens frequently in the technology podcasting world.

After listening to the show, though, you probably would not be able to imagine a third host, because the banter between Graham and Carole and their insightful questioning of guests makes one feel as if there is no topic they cannot discuss thoroughly on their own.

Graham believes that “people’s lives have a rhythm,” and they want their show to become part of it. What does that mean exactly? They are consistent in the show’s recording and posting schedule, allowing them to fit into the life rhythms of their listeners. According to Graham, “The lovely thing about podcasts is that you can listen to them while you’re doing anything—fixing the car, walking the dog, or doing the gardening.” 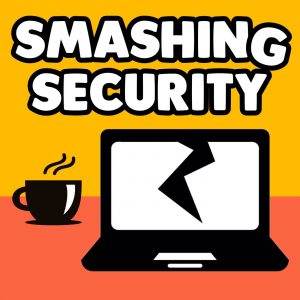 For someone who works on the cutting edge of technology and threat prevention, you might be surprised to learn that Graham is a fan of retro TV… and not just the black-and-white reruns of the classic Doctor Who. In truth, Graham says he “falls asleep” when he goes to “cinema today.” All the action and CGI doesn’t keep his interest. For him, it is like “watching a washing machine fight a dishwasher.” He prefers “the slow, nothing much happening as a story builds” type of entertainment. Kind of like the podcast—the story builds, and you are not always sure which path the conversation will take. One fan described the show this way: “It’s like one person is trying to tell a story, and the other two keep trying to derail it.”

Originally, Carole was the one who wanted to start the podcast, but Graham was not interested. They had already done one, the Sophos Security Podcast, way back before podcasts really were what they are today, but they then left Sophos and started their own businesses, thereby ending the show. Flash forward to 2016, and with Google Hangouts came the award-winning Smashing Security. Graham quickly moved away from video and the live format, and now, they record and edit their episodes to drop every Wednesday at 7:00 p.m. EST. Those who support them on Patreon get the episode a few hours earlier.

Despite their millions of downloads, Graham is surprisingly humble. He is still the young man who learned to code by inputting code from magazines on a Sinclair ZX81 with 1k of memory “and a rubbish keyboard” that his dad brought home one day.

He later created a computer adventure game distributed for free via shareware on floppy disks in those same magazines. If players liked the game, they could send him a check for five or ten pounds in thanks, and he would offer help if they were stumped by the puzzles. Nowadays, inputting code from a magazine would end up on an episode of Smashing Security to detail how you can’t trust a program just because it appears to be from a reputable source.

That game secured him his first tech job as the first Windows programmer of Dr. Solomon’s Anti-Virus Toolkit. Dr. Alan Solomon was a fan of the game, so he sent him a check, some cheesy biscuits, and a note that said, “Love the games. If you want a job, call me.” With that note, Graham’s career in cybersecurity was launched.

What began as a love of programing, talking, classic TV, and the Beatles morphed into one of the top cybersecurity podcasts in the world. Yet Graham is still always shocked when fans reach out to say they’re listening. He treasures every review, email, letter, and guest who agrees to be featured, and he has traveled and spoken around the world, meeting fans and exploring how alike yet different we all are.

A lover of chess, he landed legend Garry Kasparov on the show twice and even got to play a game with him. Nope, he didn’t win—which didn’t matter, though—just being able to talk to someone he respects is what it is all about for Graham.

That and pure fun, that is. Graham is all about having fun while doing life. If something becomes a job or chore, he considers moving on.

With this being the December issue of Podcast Magazine®, I can’t think of a better gift to give yourself than having a listen to Smashing Security. Then, let Graham and his incredible co-host Carole know what you think. If you do reach out, expect a response back, because Graham is just that kind of host.

Walking the Talk While Talking About The Walk

Walking the Talk While Talking About The Walk