Are you a high-performing male entrepreneur?

Do you have your priorities in order?

If you’ve been wondering how in the world you’ll ever balance your business with your family life, you need to listen to Jon Vroman’s The Front Row Dad Podcast.

Jon has been sharing the valuable lessons he’s learned about winning as a dad and husband while balancing a thriving career with dozens of high-profile audiences. In fact, I met him at the Gobundance mastermind years ago in Lake Tahoe, where he was a keynote speaker. He fascinated me, because he was so focused on being the best dad possible… and business came after that.

At that time, I wasn’t that guy. I was very success driven. My wife and I had just had our daughter a month before, and I couldn’t wrap my head around how I was going to prioritize my time and balance everything. I was actually experiencing a lot of anxiety as I tried to figure out how to be a great dad, a great husband, and a great business owner, while still juggling everything else in my life.

I knew I needed the right mentors—men who were my age that I could model. After I heard Jon speak, I just had to listen to his podcast.

Fast forward to today. With everything I’ve learned along the way, I share a similar passion for helping men to be evolved, educated, and empowered to live the life of their dreams without any restrictions.

Jon is open about his journey, too. “Prior to having kids,” he said, “I was reading personal growth books and was already absolutely committed to being the best dad on the planet when I became a father.”

The true test came when his first son was born. Jon was in the early stages of his business as a speaker, coach, and author. He thought to himself, “My son’s a newborn; he doesn’t really know how hard I’m working. Besides, I’m doing this for my family.” Jon kept thinking that if he worked hard enough, he would eventually have the financial freedom and free time to be the amazing dad and husband he always wanted to be.

Many entrepreneurs will tell you they don’t even notice the years flying by. And, if you’re like Jon, you’re moving from strength to strength in your business, saying “yes” to every opportunity because, after all, how can you say “no” after working so hard and sacrificing so much?

Before Jon knew it, in the blink of an eye, his son was six years old.

Suddenly, it dawned on him that if he didn’t make a change, he would be the guy who gets to the end of his life and says, “Well, I built this great business, but I was an absent father and a terrible husband.” In that moment, he knew that his role as a father was more than just paying bills and providing for the future.

The time to step up was now.

He hosted a three-day event and invited 30 men. The only rule was that no business talk was allowed. “We just talked about fatherhood,” he recalled. Their conversation also turned to the concept of needing to be a great husband in order to be a great dad. Other related topics came up, too, and Jon realized that, “We all had masterminds for our businesses, but we didn’t have one for our family life.” 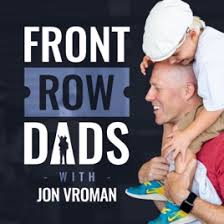 And just like that, The Front Row Dad Podcast was born.

Jon figured out why entrepreneurial men like him tend to give their best hours to their business: because it’s easy! Oops, the cat’s out of the bag, now.

Men hide at work. It’s true! It’s much easier to be the boss in the workplace than it is to get your children to do what you want them to do. Parenting can be difficult, especially if you haven’t been educated about it. That’s why his podcast means so much to Jon and to his listeners.

The world of podcasting is the perfect fit for Jon’s personality because of his natural curiosity and fascination with people’s different approaches to life. Even after 180 episodes, he is still fired up about the unique wisdom each guest brings.

He points to two guests in particular who had a profound impact on him: Jim Dethmer, who talked about “Being Present with Your Wife and Kids,” and Dr. Zach Bush, whom Jon refers to as one of his “favorite human beings on the planet.”

Dr. Bush has impressive medical credentials, but what really stands out for Jon is this doctor’s spiritual connection to the world. He emphasizes the importance of taking care of the earth and our bodies, and living healthy, regenerative lives.

Jon strongly believes that great dads don’t only take care of their kids; they take care of all the kids in the neighborhood, and they care about our global community—for this generation and generations to come.

Jon’s mission is to bring this kind of wisdom to the world. He humbly says, “I’m a dad who’s just trying to figure out a thing or two. Everybody has some genius that we can highlight.”

This philosophy reflects the proven Front Row Dad system—the engine that makes everything work. It is built on the concept that relationships are important, and within relationships, you’ll find the resources. Then, when you apply those resources, you’ll get a result. You assess whether the result is the one you want, and if it isn’t, you go back to the drawing board.

Jon says, “Each person I meet has been put on my path for a reason. It only takes one resource or question or suggestion to get a result and change the game.”

The Front Row Dads Podcast touches lives in a powerful way thanks to Jon’s conviction that we need to put time and energy into our families. If you feel the same, take a listen. You’ll be glad you did.