One of the benefits of being a category director for Podcast Magazine is that we are able to choose the podcasts we feature.

So far, 2020 has been a year of seemingly non-stop global crises and challenges. Personally, I found myself daydreaming about a happier place—Disney’s magical kingdoms—and following stories about the theme park’s plans for re-opening around the globe.

That’s also how I found the No-Guilt Disney Podcast, which combines the talents and passions of three women.

At the heart of the podcast is Patty Holiday, who is also the host of the No-Guilt Fangirls Podcast. Patty, podcaster, writer, marathoner, and mother, is also a travel agent who specializes in Disney packages.

Theresa Mabe is co-host number two, and she has a passion for Disney and her stuffed, mini traveling companion, Gertie the dinosaur (from the 1914 animated short film by American cartoonist and animator Winsor McCay, and who is of course featured at Disney’s Hollywood Studios). In 2014, Theresa was diagnosed with macular degeneration, a nerve disorder that leads to progressive vision loss. She became an advocate for digital accessibility and a blogger about the same topic. She’s a big fan of the way Disney is adapting Disney+ content for accessibility.

Jane Mayo is co-host number three. She’s been a lifelong fan of Disney and reality television (think Real Housewives). She met Patty via an online community for runDisney (the road race division of Disney Sports Enterprises, a unit of Disney Parks). An avid podcast listener, she is also credited with planting the seed for the No-Guilt Disney Podcast.

“For me,” Jane said, “podcasts are a way to escape and feel connected to people about the things that I love.” It makes sense, then, that she went in search of a podcast focused on Disney. When she wasn’t able to find one that gave her the “friend-factor feel,” she told Patty that she needed to start a podcast.

So, Patty started the No-Guilt Fangirls Podcast, which is all about entertainment, movies and television. Having been a follower of Theresa’s Gertie the Dinosaur on Twitter, Patty featured Theresa (who quickly became one of her favorite guests) regularly on the show.

Soon, Patty realized that the most popular episodes they published were those centered around Disney-related topics. That’s when Patty called Jane to run the idea for the Disney podcast by her, and when Jane was quick to support it, Patty asked her to co-host.

From there, Jane recommended that Theresa (who she had met via the No-Guilt Fangirls Podcast), join as another co-host.

Patty recalled, “It was like dominoes went into effect once we decided we wanted a Disney podcast. We also wanted it to be different… to be our version of what Disney Parks and the experiences there really mean. That meant we for sure weren’t going to do trip reports.”

Within two months, they launched the No-Guilt Disney Podcast and a complementary Facebook group. They were pleasantly surprised when listeners they didn’t know began leaving reviews and asking to join their group. 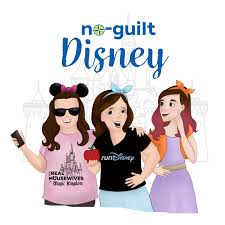 Theresa said, “The podcast is working. We have diverse knowledge among the three of us, and that’s something people connect with. It doesn’t matter where they are in their Disney fandom or how much knowledge they have about Disney in general. They can find bits from the three of us that they can connect to.”

Jane agreed, reiterating, “I think that’s one of my favorite things about the podcast. We each bring a little different perspective, and we’re each in a different place on our own Disney journeys. There’s so many opportunities for a listener to connect, and I think that that really hits home.”

Jane is the only host who actually lives near Walt Disney World. In fact, it only takes her eight minutes from leaving her apartment to arrive at Hollywood Studios. Fortunately, as a season passholder, Jane is able to visit the parks whenever the mood strikes.

“It’s convenient for me, and it makes me happy at the end of a bad day. I can go get a Mickey bar or take a walk. Even if it’s just being there and listening to the sounds of Disney, for me, there’s no greater therapy.”

Patty’s last trip to Walt Disney World was in January for a Disney marathon weekend. She was scheduled to return in April for a Star Wars Rebel run, which has since been postponed. Theresa was scheduled to visit the park on the very day WDW closed.

All three ladies eagerly anticipated the re-opening of Walt Disney World in July. For them, the closure necessitated the longest stretch any of them had in getting their Disney “fix.”

On a recent episode of their podcast, Patty and Jane shared their experience using the My Disney Experience app to plan their upcoming trip, which included making reservations for the re-opening. Overall, they gave the experience a “thumbs up” despite some technical glitches.

For Theresa, the My Disney Experience app has become an integral part of her visits to the parks.

“The app has become one of my favorite things. With not being able to see well, the app’s screen reader provides all the menu items. Anybody can place an order without that ‘I’m-jumping-into-this-and-don’t-know-what-to-expect’ anxiety. I appreciate that Disney has always been aware of this need for people who are visually impaired, and they’re inclusive. I think for them, it doesn’t matter what your background is or where you’re coming from. When you go to Disney, you have an amazing, memorable experience that you can take with you, especially if it’s the one and only time you have a chance to go. They want to make sure to provide those memories. And it doesn’t matter how exactly you experience it… whether it’s the same or different from someone else. They want you to take back that special feeling Disney World gives you.”

Patty, Jane, and Theresa are funny, down-to-earth, and honest in their podcast episodes. They don’t all agree on which rides or parks are the “best.” Nor will they discuss the Star Wars attraction until Theresa has her own experience—she doesn’t want any spoilers!

If you are a Disney lover who is missing the magic of the happiest place on Earth, try this podcast for a walk down memory lane of your first visit to Disney—your inner child will thank you for the experience!

Relationships, Resources, Results, and Balance...How do you define yourself?