Men On Purpose host Ian Lobas—a self-described “naturally defiant person”—has held close to his father’s advice during the rollercoaster seasons of his life.

“He always told me, ‘You can be defiant, but you must know that comes with certain pleasures and pains that other people won’t deal with. If that’s the route you want to go, keep your defiance tight, and go for what you want.’”

Early on, Lobas worked for his father’s shipping company and hoped to continue doing so for the rest of his career. He loved seeing his father’s passion not only for the work, but for experiencing the variety in it while making a great income.

But then, the economy took a downturn, and Lobas had to leave the shipping business and pursue a different path. “I only ever imagined working with my dad, eventually taking the business over, and then running it forever. I was terrified,” Lobas says, giving his wife, Meredith, credit for encouraging him to move forward. “My wife is the reason for my success. She was my biggest supporter and trusted me––I think more than I trusted myself.”

After teaching swimming for $10 an hour, Lobas’s wife, Meredith, encouraged him to start a real estate sales and marketing business in September 2012. That grew quickly and taught him an important lesson just as fast: “I learned I had this identity around money that I wanted to shake, but I was terrified to let go of money, so I just worked the business,” says Lobas, who absorbed all he could about his business, systems, and personal development.

“I’d go to a seminar or read a book, and I would say to my broker, ‘Get 10 people together on Monday. I’m going to teach this cool lesson I learned this week.’ I did that every week,” he says. “I realized that everything grows to the extent that you do––your relationships, your marriage, yourself, your parenting, your money––I was fully committed to growth, personal development, and coaching myself, so I could then reach back and help other people.”

In 2016, at the height of his success, Lobas hit a wall. “I just hated my life, and I hated who I was,” he says. “I was so afraid to make another move, though, because the move I made away from my dad’s business was so scary. It caused me a lot of anxiety and panic. Why would I voluntarily put myself through that again, when I was making insane amounts of money––huge, huge, huge money? The answer––because I was miserable.” 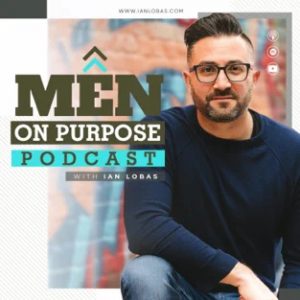 Lobas knew his identity was still attached to success, so he had to ramp up his commitment to personal development to overcome that block. “I had to continue to evolve and move out of my own way,” Lobas says. That process included a certain amount of “chipping away” of self, which Lobas likens to a story about Michelangelo, who sculpted the 17-foot marble statue of David:

“Michelangelo said he didn’t create the David––David was already there in the marble. He just chipped away at the pieces of marble that weren’t David. The same applies to humans, society, school, bullies, gender roles, culture—they’re all pieces of marble, and we have to figure out how to chip them away.”

Lobas became focused on helping other people evolve and shed their own pieces of marble. This led to hosting a small private podcast called Monday Night Live and then on to hosting one of the largest real estate podcasts, Real Estate Rockers, for the owner, Pat Hiban. From there, he was asked to speak as an influencer at New Media Summit, even though he didn’t have his own podcast.

Once the pandemic hit, and after proving himself for eight years, Lobas decided to leave real estate and pursue his real passion—coaching high-level men. He built the Men On Purpose brand and podcast to feature, celebrate, and dig deep into the lives of high-level “men on purpose” who have gained clarity on their life’s purpose and are dedicated to revealing their most authentic selves. His goal?

To guide listeners in becoming the best and most purposeful version of themselves.

Lobas has focused on creating fly-on-the-wall conversations with his guests, asking the hard questions and being a catalyst for them to communicate their story. As the Men On Purpose podcast took off, the success and mission spun off into other coaching ventures, including private retreats, small group events, and one-on-one and group coaching.

“I know that focusing on message and mission allows that guy who doesn’t have any money to spend on coaching––the one who doesn’t even know where to go, yet he somehow stumbled across my podcast––to feel supported. He feels heard. For the first time, maybe in his life, he feels like he’s not alone. That’s important to me, and that’s why the podcast does so well—because it’s that clear, that genuine, that authentic.”

As Lobas evolved and focused on his self-worth, he and his wife created a vision to live a higher-end lifestyle in California, with better weather, new faces, and different conversations. In 2021, they carried that vision to fruition, moving from Baltimore, Maryland, to a Los Angeles home with an ocean view. They now enjoy tightly structured days that allow Lobas to mesh work, self-care, and special moments with his children… like driving his six-year-old daughter to a progressive, outdoor-based-learning private school and spending a few hours of “bro breakfast” with his two-year-old son.

“Not a lot of dads my age can create this much time to spend with their children, but I just don’t want to regret when those seasons of life are over. I know I can never get that time back,” he says.

Just as his father’s words stuck with him, Lobas hopes his kids’ morning routines to “fuel your body and fuel your mind” guide them forward. “We’re just teaching them healthy habits for success or whatever they do. I’m training their brains to be open to learning first thing in the morning and building the habit of rehydrating.”

Looking back over his journey, Lobas says, “All we had to do was take our identities out of the business, because we are so much more than that. I am not a podcaster. I am not a real estate agent. I am not a coach. That’s not who I am. I am of service to the world while also wearing a hat that says I coach people. I’m a man on purpose, and I live a very purposeful, purpose-driven, purpose-built life.”