Arguably, now is the greatest time in history to be an entrepreneur.

With the ability to tap into proficient, gig-economy talent from across the globe via a single mouse click and affordable, all-encompassing technology that empowers virtually anyone to launch, market, and monetize darn near any product, program, or service at moderate cost, we are living in unprecedented times.

Enter Nathan Chan, CEO and creator of Foundr— an independently published global media and education company whose mission is to help aspiring entrepreneurs achieve their life and business goals—and, in large measure, the model upon which the launch of Podcast Magazine was based.

Foundr distills the lessons of the greatest founders—practitioners—of our time into magazine articles, blogs, podcasts, books, and courses. Their focus? Actionable business-building advice, as opposed to theory.

“Just an average guy” who knew nothing about entrepreneurship, startups, marketing, or how to build a business, Nathan’s original intention was simply to speak to some of the most successful entrepreneurs and founders in the world to find out exactly what it takes to become one… and then share those findings.

Concerned that the educational market for entrepreneurs was oversaturated with “gurus” who seemed more interested in making money off those who long to build something that really matters than actually supporting and guiding them to do so, he sought to create a leading resource for “helping today’s entrepreneurs build tomorrow’s leading businesses.”

It all started with Foundr Magazine.

In 2012, while working his day job in customer support at a travel company, Nathan published the first issue of Foundr Magazine (which he then considered a “passion project”) featuring the interviews he had conducted, hoping that his readers could learn from them, too.

Roughly one year later, Nathan decided to expand upon his mission. His new, much loftier, objective? “To build a household name entrepreneurial brand that impacts tens of millions of entrepreneurs every single week with our content and bring true entrepreneurial education to the masses to drive humanity forward.”

Nathan has never been one to think small.

Driven by this vision, he quit his day job and, despite some misgivings, kicked off The Foundr Podcast shortly thereafter.

“I definitely had some ‘mental roadblocks’ going on,” he explained. “I called my friend, who is now my head of marketing, Dave Hobson, and explained how I wanted to launch the show. But I was worried about publishing the interviews for free in the podcast world when people were paying to read about these exact same stories in the magazine. Dave challenged me to do it, and said, ‘Let’s just see what happens.’ To this day, we haven’t received a single complaint.” 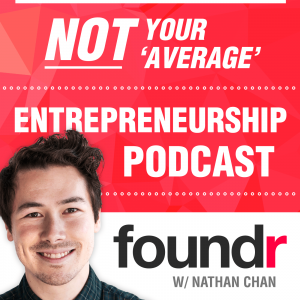 The Foundr Podcast showcases Nathan’s interviewees’ processes, failures, and critical lessons learned, and provides actionable strategies that listeners can leverage to build their own successful businesses.

His first interview subject: entrepreneurial kingpin Sir Richard Branson—an admirable feat for any podcaster, let alone one at the beginning of his podcasting journey.

“Seven years ago, podcasts were nowhere near as big as they are today,” Nathan said. “What I learned quite quickly early on is that, to stand out, it’s all about your contacts and connections. When you establish meaningful relationships, you have the ability to manifest practically any interview you want.”

And that he has. Inviting listeners to “Stand on the shoulders of giants and learn from the greatest minds in business today,” Nathan has personally interviewed the likes of Arianna Huffington, Tony Robbins, Jessica Livingston, Seth Godin, and, ehem, Steve Olsher.

Speaking to his desire to provide content in different learning modalities to reach as many people as possible, Nathan explained the mediums (magazine, podcast, video, etc.) he uses to distribute Foundr’s content as “a different experience. Some people love to learn by reading. Some prefer visual learning and watch vlogs. And of course, there’s audio, via podcast. Each channel offers a unique experience.”

Nathan attributes much of his success to those around him: “It wouldn’t have been possible to get my company to where it is right now without an incredible team.”

He also credits his mentors and coaches—Steve McCloud, in particular. The two met through the Entrepreneurs Organization Network and Nathan consults with him on a weekly basis. Steve also leads Foundr’s strategy days, during which the team discusses “what’s worked, what hasn’t, and what we need to focus on for that quarter. Steve is an incredible coach and leader. I’m learning so much from him,” Nathan said.

The biggest lesson gleaned from his coach so far “is being in personal alignment and generating alignment across the team—getting them on board with the vision we have and providing the systems needed to implement and see things through. We’ve got their buy-in from the start of the year and every quarter on. I spend most of my time now coaching people on the team, working on new initiatives, and ensuring that our content meets our standard for impacting people’s lives,” he shared.

Nathan has big plans moving forward, which include building a line of products around books, creating more online courses (Foundr’s primary revenue generator), an educational platform (think online business school), and the licensing of the brand to capture other markets (i.e. Foundr Africa, Italy, Romania, India) with the translation and repurposing of content.

He also intends to create a podcast network to scale existing content.

“There is no doubt that podcasting is only going to get bigger. When you have more than one show, they can all elevate and promote one another. We can give people a platform, and that’s what I aim to do.”

With that in mind, Nathan offered the following tips for building a successful podcast.

“First, get on as many shows as possible, particularly in your space. The more guest appearances you make, the faster you can grow your podcast. Second, ask for reviews. We have well over a thousand reviews on Apple across all the different countries, and that’s so important. Third, stay constantly aware of how you can differentiate yourself in the marketplace. For us, people might not know much about me as the founder, but they know the brand—they know we have the ability to get in touch with hard-to-reach people.”

Foundr aims to continue to share everything they learn with their community in full transparency. “We follow the ‘If you win, we win’ philosophy,” Nathan said with a knowing smile.

Fortunately, for all of our sakes, it doesn’t appear that their winning streak is in jeopardy anytime soon.

Relationships, Resources, Results, and Balance...How do you define yourself?

'Pretending' to be a Marketing Podcast: Matt Wolfe and Joe Fier Talk About The Real Currencies Of Business