You might assume a podcast called “The Hustle And Flowchart” would be about… well, hustling… and flowcharts… and business.

But I’ll let you in on a little secret: it’s only ‘pretending’ to be about business. Really, it’s a self-improvement podcast masquerading as a marketing podcast.

Matt and Joe started podcasting a decade ago with The Online Income Podcast. Just a year prior to that, they’d gone full time with their online business.

Their early podcasting studio consisted of a stack of mattresses on the floor as a table and snowball microphones each connected to a separate computer recording individual audio files that had to be edited back together. (Clearly, that was back before podcasting became as easy as it is today.)

Matt brought his introverted tech background in audio engineering to the mix, whereas Joe brought his extroverted networker and connector skills. Together, they ‘mind-melded,’ combining their areas of genius to create the rapidly growing Hustle And Flowchart Podcast.

And from what I can tell, the partnership sure does work. These two guys genuinely like each other and have a blast hosting their podcast together.

From Matt’s perspective, “We really feed off each other… and we come at our interview styles from completely different directions. I just don’t think either one of us would make content as good on our own as we do when we combine it.”

Joe adds, “I like riffing back and forth, throwing the ball back and forth, because you get different perspectives. That’s what I love about Matt and me. If you’re just one dimensional, one perspective, one sided, you’re not going to serve your audience as best you could.”

In all honesty, for the first seven years, neither Matt nor Joe took their podcasting too seriously. Without systems in place, their episodes popped up sporadically… and they both realized what they were doing wasn’t the most effective way to build a show. So, they hit “pause,” set some goals, and created solid systems. And those shifts have resulted in two consistently kick-ass episodes a week ever since.

Their new goal? To have cool conversations and “nerd out” while chatting with smart people in their networks, and to share those conversations in a way that could build a platform to intentionally attract a community of business builders.

Traditional monetization strategies have never been top priorities for the pair, because they realized the true value of their podcast was in alternative “currencies”:

Networking: Their podcast has provided a “foot in the door” to almost anybody they’ve wanted to get to know. Quoting Tim Sanders, they explained, “Your network is your net worth.”

Knowledge (aka “Free Consulting”): When you interview smart people and get to ask whatever questions you want, you’re essentially stacking up free consulting sessions from experts who bill thousands of dollars an hour.

Credibility: Appearing on camera next to Jay Abraham, Roland Frasier, Rich Schefren, and other business legends instantly created authority for Matt and Joe.

Yes, business is all about generating currency. Sometimes we forget, though, that networking, knowledge, and credibility are all types of currencies that we can build and exchange later for other frequencies in our businesses.

Intentionality around building their network sets Matt and Joe apart. In fact, they’re so intentional about it that they’ve got a spreadsheet they call their “Dream 100” list.

It’s a list of everyone they could think of who they wanted to connect with and interview on their show. 50% of the people on their list were just one connection away. Most of the others were a few connections away, and a few were more like “moon shots.” What they quickly discovered as they shared their list was that you never know who is connected to who. 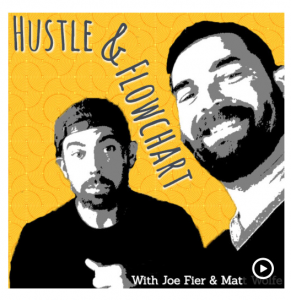 Matt and Joe include their “Dream 100” list via Google docs spreadsheet in their email signatures. This way, every time they send an email, the recipient sees that list and has the opportunity to make introductions and connections. And it works! They’re rapidly expanding their network (and their net worth) with their podcast.

As affiliate marketers, the platform Matt and Joe have built allows them to share unbiased recommendations of products, services, books, and more that their community gets excited to check out. This influence is yet another form of currency that pays off in business.

So remember, beyond money, your network, your knowledge, your credibility, and your influence are all valuable currencies. The wallets are getting fat for the guys over at The Hustle And Flowchart Podcast—and they’re quick to share the wealth with their community.

Downloads Is The Game

Staying Crafty With The Craft Hangout

Downloads Is The Game