From the two-year-old coloring with crayons to the grandmother in her rocking chair knitting and crocheting, crafting spans the ages and can be enjoyed by anyone, at any time, in any place. In the simplest form, you perhaps might need a pen and paper. In the most complex, you could be working with huge pieces of equipment and dedicated workspaces to the art. 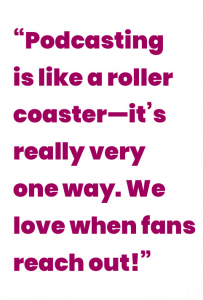 Like most things, your crafting abilities can expand as your expertise grows. And with it being a $45B industry in the U.S. alone, there are indeed successful craft-based businesses.

Eliza Kapitan, an avid crafter, entered the world of podcasting after searching for an educational crafting show that crossed several categories and had an entertaining vibe. It turned out to be a tall order. Since she couldn’t find what she was looking for, she created it! In 2018, the Craft Hangout podcast was born.

Craft Hangout is unique in that the episodes range from interviews with guests who are involved in very simple crafts often taken to the next level to CEO’s of companies that support the crafting world. Eliza, along with co-hosts Leeloo Thatcher and Jessie Katz Greenberg, have created a podcast that highlights, celebrates, and lifts up the crafting world. All three are passionate crafters, each with their own “specialty,” and they share a love and passion that shines through every episode.

Each co-host is multi-talented and brings her own unique background to the show. By day, Eliza works for a watch company, but by night, she’s focused on the podcast, editing it for her audience and working on her crafts. She spends a lot of time making sure she is giving her audience a great experience. Her craft passion is making jewelry, and she enjoys making things that “you can’t figure out” the materials used.

Leelou’s passion is string art, originating from the string art table numbers she made for her wedding. Not realizing Leelou wanted to keep the numbers, a friend took one as a keepsake. In a friendly exchange, the table number was “held for ransom” for a replacement string art baby present. This experience jumpstarted her love for that particular art (despite Leelou’s New York city apartment neighbors being less than thrilled with her constant hammering). When Leelou is not with hammer in hand, she is a lingerie fashion designer. When it comes to the podcast, she also helps find guests to interview.

Jessie’s craft jam is hand lettering and illustration, which she then incorporates into patches and metals. She also integrates recycled materials into her designs. She is the resident social media and video expert, which combines her love of teaching crafts with her professional experience and expertise, and also led to her new job with the video app Jumprope. In an ironic twist, just two days after starting her position with Jumprope, Craft Hangout’s featured guest was—yup—the CEO of Jumprope! Several months prior, they had reached out to Eliza about appearing on the podcast and happened to mention they were looking for a craft content director. Funny how life works, isn’t it?

Eliza initially started the show with different co-hosts, but by the end of the first season, life changes took both of them in a different direction. Eliza and Leelou had been friends for years, and Leelou occasionally made guest appearances on the show. They had so much fun, they decided to make it permanent. They met Jessie at a craft event, invited her on as a guest, and from there, to co-host. The trio, now good friends, enjoy recording from Eliza’s home, along with a bottle of wine and brie.

It is extremely important to them that their listeners feel they are first and foremost. They love to hear from their community, and invite even more interaction. “Podcasting is like a roller coaster—it’s really very one way,” Eliza said. “We love when fans reach out!” Comments on Instagram like, “Wow, Craft Hangout is changing my life” gives them fuel and encouragement to continue on their path. They view the show as a great avenue for connecting with the creative community. 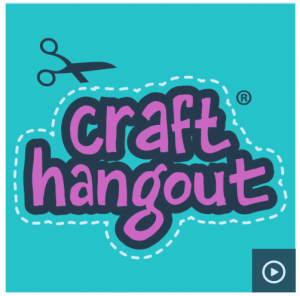 The episodes of Craft Hangout vary from entertainment to educational. They serve the craft hobbyist as well as those who want to make a business out of their craft. They each have their favorite episodes and guests, but the common thread is always the love of craft.

If you’re just starting out in the crafting world, the three agree that the best way to begin while avoiding overwhelm is to simply sketch with on paper. It’s easy to do and can be done anywhere.

If you’re a more experienced crafter who is looking to take your hobby to a business, the ladies advise starting with the crafts you love, as their featured guests have done. For example, in the episode with guest Amy Oxford, they talk about Amy’s building her business based on elevated summer camp crafts that many of us enjoyed as kids. Or, the guests are using crafts to create works of art.

The topics covered vary even further, as in those that celebrate the mindset of crafting, or like in the episode featuring Stuart Semple, who creates cool products for everyday use.

Another favorite topic is craft fails—an inevitable part of the process. “You aren’t a crafter unless you’ve had a craft fail,” Eliza explained. Leelou and Jessie agree, admitting to having some major ones themselves (like those Jessie refers to as “looking like barf on a bracelet”). Most of their “fails” involved trying to replicate a craft they had already completed. So, rest assured, you’re in good company with your fails!

Craft Hangout is a podcast with a “mix of art and business and just great people,” Eliza said.

Eliza, Leelou, and Jessie will continue to be inspired by—and inspire others with—all the great works out there. In the meantime…

Under The Radar: Completely Unnecessary Podcast

'Pretending' to be a Marketing Podcast: Matt Wolfe and Joe Fier Talk About The Real Currencies Of Business

Under The Radar: Completely Unnecessary Podcast