When Bad on Paper’s Grace Atwood decided to take a break from podcasting, co-founder Becca Freeman knew right away she wanted former guest Olivia Muenter to step in as her new co-host.

Unbeknownst to both at the time, Freeman and Muenter each routinely take time in January to evaluate and plan for the upcoming year. Muenter was in the middle of that process when she received Freeman’s offer to co-host earlier this year.

“I was intimidated by this idea of taking over for Grace… to have such a huge, engaged audience,” Muenter says. “I had decided I would probably say ‘no.’”

Freeman understood that feeling. For her, it was in January 2018—in the middle of her annual reflection—when Atwood first suggested they start a book-club podcast. Already an established lifestyle blogger and influencer with 100,000 Instagram followers, Atwood was itching for a new project.

“Grace realized one of the most engaged but underexplored areas of her blog was books,” Freeman recalls, reflecting on her longtime friend’s pitching of the idea to host a show together. “She caught me in January, when I was already in a new-year-new-me mindset and ready to say ‘yes’ to things. Otherwise, my gut answer would have been, ‘No, absolutely not.’”

Freeman says they started the podcast “as a complete lark.” Being close friends, they enjoyed hanging out together and talking, so they simply started recording their conversations. “We had no idea what we were doing, and we had no professional aspirations,” she says, adding that aesthetics was more important. So, they created a cute logo, started an Instagram page, and posted the first episode. 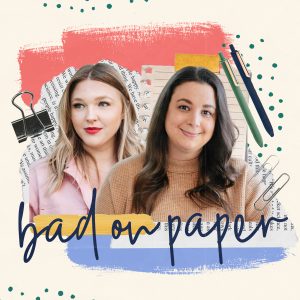 “I didn’t think anyone was going to listen, but lo and behold, we right away picked up an audience,” Freeman says, adding how she has been involved in many book clubs in her life, but they all died slow deaths because of scheduling conflicts. With Bad on Paper, they were able to overcome that common book-club obstacle, as they developed a community of people who were interested in reading the same books they were and having a venue to talk about them.

For the first year of the podcast, the hosts read and discussed what Freeman refers to as “bad young-adult books—none of which were winning a national book award.” Despite being “bad” books, this genre was what they wanted to discuss, and their audience did, too.

They started with The Selection Series, which Freeman describes as “The Bachelor set in a dystopian universe with teenagers—it’s super addictive.” But soon, they realized publishers were not releasing enough young-adult series to sustain a podcast. The second year, they expanded the content to include all contemporary literature, a monthly book club (versus biweekly the first year), and featured guests—which have included Cindy Crawford, Elizabeth Gilbert, Stacey Abrams, and Graham Norton.

“We have been really fortunate to have some incredible people on as guests,” Freeman says, adding with a laugh, “I used to say that we had a podcast as a way to catfish cool women into being our friends.” Although having popular guests was a catalyst for growth, “We still have really strong roots in the book community, and that’s part of the DNA of our podcast. It sets it apart from other interview or chat shows.”

Earlier this year, Atwood decided to step away from the podcast, but Freeman wanted to continue. They mutually agreed almost immediately that Muenter would be a perfect new co-host. “It was a lightning-rod moment,” Freeman says, adding that she sent her prospective co-host an email January 4 with the subject line “Left-Field Question.”

“It was such a jerk move,” she says, “because she had already done all of her New Year’s goals and intentions. She didn’t write me back for two weeks.”

Muenter recalls, “I was shocked… genuinely shocked.” Planning to decline, she chose to meet with Freeman on a Zoom call anyway. “By the end of that call, I was thinking that it made a lot of sense, and I felt really, really good about it. I decided I wouldn’t let the only reason I didn’t do it be because I was scared that I would disappoint people.”

Afterward, they spent months meeting, brainstorming, and planning, with Muenter taking the co-host seat officially at the beginning of April. “It feels like it’s been longer—way longer,” she says. “It just fit into my entire plan for the year, which is to keep moving forward and evolving my career into something different that really works for me.”

The new co-hosts have challenges, though, with Freeman living in New York City and Muenter making her home in Philadelphia. For the most part, they are recording virtually over Zoom, so they can see each other’s faces and have a conversation, but they plan to meet once a month, alternating locations to record, as well.

“Grace was one of my best friends for 10 years, so even when we were recording remotely, it was fairly natural and easy,” Freeman says, explaining that she and Muenter are not just building the podcast together, but growing a new friendship. “The podcast is like sitting down to have a glass of wine with your girlfriends. In this case, Olivia and I are developing our relationship on air, and people get to hear it develop and evolve in real time. We want to make sure that’s what sets the podcast apart—that it does feel like you are part of this friend group.”

Just a few months in, Muenter says being a podcast co-host is better than she could have imagined. “I am using my time how I want, growing my own audience, and focusing on something that really brings me joy—books have always been that for me. Particularly in the past couple of years, I’ve really leaned into that a lot more. This is kind of perfect.”

Four years in with nearly 30,000 downloads a month and an active Facebook group of more than 8,000, Freeman has changed her opinion about “bad” books. “No book is bad. Embrace any book that brings you enjoyment and pleasure,” she says. “There is no such thing as a guilty pleasure.”