There is probably a lot we don’t really want to know about our parents. Their sex lives, for instance, or what exactly our dads get up to in their “garden sheds.”

Yet when an uncomfortable unearthing of vapid, corny yet perversely lovable porn-prose turns into a hit podcast with 250 million downloads, a spinoff HBO special, and sold-out stage shows at the Royal Albert Hall and the Sydney Opera House, it’s a profoundly hilarious exception.

Consequently, since 2015, Morton and his London friends James Cooper and Alice Levine have used the medium to bring to life the self-published saga Belinda Blinked. In it, listeners are welcomed into the world of Belinda Blumenthal, the nymphomaniac sales director of the kinky cookware company Steele’s Pots and Pans. 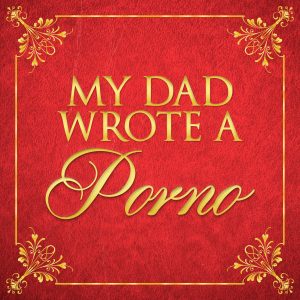 Every week, avid fans known as “Belinkers” laugh-cringe through phrases like “her tits hung freely, like pomegranates,” as Morton reads a chapter of his dad’s eccentric porno-prose—a strange blend of off-putting sex scenes and highly irregular business advice, all with the hilarious running commentary of Cooper and Levine, who hear it “live” for the first time during recording.

“People assume I found it under some papers in his office or something,” says Morton. “He’s a retired builder, and when he finished writing it, he said, ‘Look, I’ve been writing a novel. Can I show it to you?’ So, I read it, died a bit inside, and then shared it with James, Alice, and some friends down at the pub,” Morton shared.

Reading Rocky Flintstone aloud together, their racy talk and embarrassed laughter soon cleared out a posh North London pub. From there, it went on to become the format of Britain’s hottest podcast.

“We all became obsessed with it, together,” said Morton. “We started reading it at various parties and it became my party trick, in a way. People would be like, ‘Oh, I’ve heard your dad’s written a hilarious book. Do you want to read a bit out of it?’, and I’d be like, ‘Yeah, sure.’ And then the more people we shared it with, the more we realized people were finding it funny, not just us.”

Morton and his co-hosts say they were quite “prudish” at first. “But now, it’s like anything goes,” said co-host Cooper.

“Yeah, I can’t believe we were so bold as to do it,” Morton chimed in. “Because podcasting was so new then, and because we had no track record in the medium or anything, I think we almost naively went into it thinking, ‘Oh, maybe 50 people might listen to this.’ And that gave us a buffer to think, ‘If we’re rubbish at this, and we fall on our faces, then who really cares?’ No one would really notice.”

“What else? Oh God, we get sent lots of butt plugs, dildoes, you name it,” Morton confessed.

“We got an email today from someone doing their dissertation on it,” says Cooper. “We get people writing songs, creating fan art and costumes… someone came dressed as a bit of trellis from the maze in book one, and then her friend was handcuffed to them, so they played out a full scenario from the book.”

The fan-love built so fast, the team started a second weekly podcast called Footnotes, which features emails and questions from fans, including celebrities like actress Emma Thompson. Emma called in, invited the hosts for dinner, and said she wanted to play one of the characters, The Duchess.

“She’s been amazing, such a lovely support, actually,” said Morton. “She’s kept in touch, and she’s been a really, really great person for us all to get to know. People like Lin-Manuel Miranda have come on the show. People like Daisy Ridley, who was listening on the set of Star Wars; it’s amazing how many people have come out of the woodwork to say they’re secret fans.”

“When we did the calling listeners episode, someone told us they were getting married because of the podcast. She connected with her now future husband over Belinda Blinked; it’s how they got talking in the first place.”

“Belinda Blinked is unintentionally the funniest book I’ve ever read.”

Several other fans have confessed that they were listening even as they gave birth. “I think it’s become a lot of people’s birthing tool,” said Cooper. “I’m not sure why.”

Morton added: “It probably just distracts them; they can laugh about it. It’s weird—the baby is being born through a cervix and hearing the word ‘cervix’ said aloud! I think the nicest thing for us is that people have been really open about their sexuality and sexual exploits, because they feel safe talking to us about it.”

“It’s kind of emboldened him to be even more creative and just crazy, which I think has been the best possible combination. He still thinks of what he’s written as ‘great,’ and now that so many people listen to it, he has the confidence to just go there and be bold,” Morton said. “He will never stop. It really shows how, if you want to do something in your life, just do it. You never know where it’s going to take you.”

For certain, the show has impacted the lives of Morton and Cooper in ways they never expected, as well. Neither can bring themselves to eat pomegranates, for one.

“My mom doesn’t listen to the show, and she just loved the wallpaper,” says Morton, “until about five months later, when some friends came around and said, ‘I can’t believe you let him put that up.’ The house got noisy for an hour or so—a hallway adorned with breasts, basically.”

Morton says his mom doesn’t mind her husband’s garden shed pursuits. “The point of erotica is to get people off. And that’s where he just misses constantly, which is hilarious. My mother said to me, ‘Now I know he couldn’t possibly have had an affair. The man writing this just couldn’t possibly.’”

So, five seasons in, what’s the hosts’ favorite episode?

“If you’re new, start with episode one,” said Morton. “But my all-time favorite is EP1 from Season 3. It’s the one where Belinda gives a live presentation at the Millennium Dome… and she meets a little, small man called ‘Alfie.’ It’s so bizarre. It makes no sense, and it’s just brilliant.”

Is There Pain in Laughter? The Comic's Depression