It has often been said that some of the funniest people on the planet regularly battle feelings of depression—that comedians use humor to validate their sense of self-worth via the laughter they inspire.

It gives them a sense of purpose.

In fact, according to one source, “… 80% of comedians with depression also have had tragic lives or childhoods, often being victims of abuse or neglect.”

Paul grew up in South Holland, Illinois, during a time when the strict and scheduled parenting of the 40’s and 50’s was giving way to Dr. Benjamin Spock’s advice to follow one’s instincts and nurture and love instead of being a cold, affectionless disciplinarian.

This set the stage for Paul to believe that, while he saw his childhood as challenging, his upbringing was “normal.”

It was also when a deep and pervasive sadness and numbness began settling in. 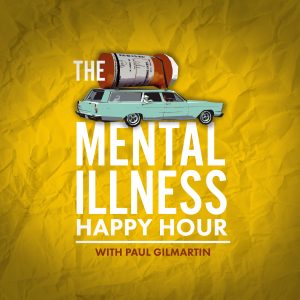 In his grade school years, Paul was a happy kid who got along with everyone. But when he transitioned from his private Catholic school into a public high school, everything changed. Separated from the friends he’d known, he felt like an outsider, and being the smallest of 1300 kids attending the school brought to his attention how “uncomfortable in my own skin” he was.

When he was introduced to marijuana and alcohol, he noticed that his “jaded, sarcastic, pessimistic, and biting” sense of humor began emerging… nonexistent, prior to this period in his life.

He also became obsessed with sex… not the act itself, but the mentality of “show me yours and I’ll show you mine.” He also could not understand why no one else was as obsessed as he was. Only years later would he recognize that the obsession was simply a way to “soothe myself and feel validated,” he said.

In the world of addiction treatment, it is widely known that a person becomes “stuck” in the emotional developmental age he or she was when he/she began abusing drugs and/or alcohol. For Paul, he was 12-14. The arrest of his emotional development didn’t begin to shift until he was in his 30’s, after receiving treatment for his alcohol and drug use.

Even with the onset of treatment in the late 80’s and 90’s, Paul still couldn’t shake the empty sadness and permeating numbness that consumed him.

In 2001, he quit drinking, but was existing as a “dry drunk”—someone who isn’t consuming alcohol, but because he has not dealt with any of the underlying thoughts and feelings that give rise to the behavior to begin with, he remains “drunk.”

Still, he was able to stay sober for a short time… until a dear friend died by suicide. Realizing he “couldn’t cry,” he isolated himself. Even at the gathering with other friends who were mourning her death, he felt he was a “terrible person.”

He turned to alcohol again, hoping it would help him feel.

And it would take another couple of years before sobriety would become his new norm.

Although he had seen a few different psychiatrists in his early treatment attempts, none of them challenged him on how continuing to use alcohol and drugs would prevent his progress, even though he was being medicated for depression.

It wasn’t until 2003 that his new psychiatrist laid it out for him, saying, “In good conscience, I can’t continue to see you until you quit drinking and doing drugs, because you’re wasting both of our time.”

That was the moment Paul decided to quit using to cope.

That was the moment he decided he truly needed help.

Working with his therapist, Paul began addressing his parentified (role-reversal of the child acting as a parent) upbringing, and the recognition of sexualization by his mother in his youth. Throughout it all, he also dealt with that “voice in our head that tells us we’re throwing our family under the bus.”

It took him a while to realize that it wasn’t about punishing his family, but about “giving weight to your feelings, so you can process them and stop punishing yourself.”

As he continued peeling away the layers, a multitude of feelings he hadn’t previously even been able to feel emerged. He began realizing that letting “steam out of the emotions” was the way to confront the issues and process them without necessarily having to confront the people involved.

What Paul couldn’t reconcile was being diagnosed with treatment-resistant depression due to childhood adversity. Although he knew his upbringing was not healthy, this was a surprise for him… however, with it came an awareness that he could no longer allow his “battery to be drained.”

He had to learn to practice a healthy sense of self-care. The key, he said, is to “have compassion for others, but not at the expense of compassion for yourself.”

Paul immersed himself in the world of psychotherapy and support group meetings. Witnessing what vulnerability and support really meant for the first time in his life, he allowed himself to “fall apart” in front of others, letting them support him.

This new territory for him came with a terrifying reality: he’d need to shed the mask he’d so cleverly worn for so long.

Having always relied on his intellect to survive, he now had to admit that he just “didn’t know.”

Relying on therapy, hockey, his guitar, his podcast, and “being in the moment,” Paul Gilmartin learned to no longer be a cold, mean, withholding man who believed for so many years that he was an *sshole.

He now understands himself, and his humor, in a whole new way, and allows himself to be vulnerable while having a sense of humor—without sacrificing one for the other.

Pointing out the fact that much of stand-up comedy is about pointing out what’s wrong, Paul believes that “a combination of imagination and pessimism is a dangerous thing. The brain that creates a f*cked-up joke is the same brain that looks at your problems in interpersonal relationships, so it’s a double-edged sword.”

In 2011, Paul launched The Mental Illness Happy Hour as an effort to start a conversation about depression, knowing there are many like him who don’t understand all they are going through. There are also many who think they understand, but don’t.

Wanting to share his story with others with the intention of alleviating some of the challenges people with depression face, Paul hopes to help fill the void he knows is out there.

“You are not your experiences,” Paul shared. “Scars may be a part of you, but they don’t have to define you. Life is a balance of light and dark.”

And now, he supports countless others around the world who tune in each week to hear how The Mental Illness Happy Hour can uplift them out of that darkness and into that light.

Thank you, Paul… you’re truly a man of compassion and heart!

Sober Up To Podcasts