“I was a hardcore alcoholic, and almost checked out. I was on a multiple-day bender when I managed to think, ‘If I don’t make a phone call now asking for help, I’m dead,’” Larry recalled.

He ended up in rehab, and has been sober ever since.

Comedy always being his first love, Larry puts it best…

“… it was a very sobering experience.”

One year later, Larry decided his voiceover work—recording other people’s words—was no longer cutting it.

He wanted to be more creative.

Starting a podcast at that time made perfect sense. So, Larry found a comedy co-host, and a podcast it was.

Eager to jump in, Larry admits his first episode wasn’t fantastic. (So, take heart, those of you with a podcast idea! Jump in, and don’t worry if the first one isn’t the best. We all need to start somewhere!)

“We took to the concept of being free and saying what we want,” Larry shared. “We may have gone a little too far with it! We did not publish that first recorded episode.”

That episode was the first in Larry’s first podcast, Accidentally The Whole Tip, which ran for about two years. With 150 episodes, it even ended up live on stage! By many perspectives, it was a very successful endeavor.

“It was a blast,” Larry said, “but it was very difficult to monetize, just because it was so blue.”

Even more importantly, Larry realized his need to mix a good time with contributing to society—to have a creative outlet as well as a way to help people. And so began his Readily Random podcast.

Featuring a variety of guests who talk about success and achievement and share stories of strength, Readily Random “READILY reminds each listener, through stories of success, inspiration, and functional business techniques, that you too can be larger than life!”

I was curious about how Larry felt about podcasting as a career.

“When I first started,” he said, “I thought monetization meant sponsorship, meant Patreon. The more I got into it, the more I saw how that isn’t going to work for most people. If you are looking to make a career out of podcasting, that’s not the path you take.”

And I agree. So, what is the path?

A podcast is a great platform to launch yourself into other arenas, where you can monetize the credibility you have gained by launching courses, writing books, speaking on stage, and coaching other people.

“It opens so many doors. It provides you an opportunity. You have to change that mindset of attaining millions of downloads to hundreds or thousands of downloads, as that’s really where you are going to be,” Larry explained.

In his eyes, when podcasters strive for those high-end podcasts with massive downloads, they often lose their authenticity and their credibility, and are not even happy doing the show!

With average download numbers for more than 50% of podcasts hovering around 170 per episode, it can be a challenge to make it work—both creatively and in regard to it helping keep the lights on.

Larry faced three main challenges: first, finding a niche. With a podcast name like Readily Random, it was initially hard for Larry to find his focus.

“I just threw it out there and hope it stuck!” he laughed. 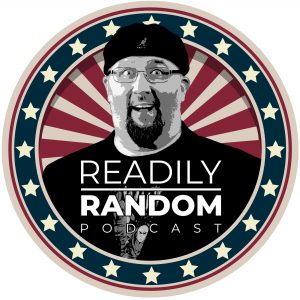 With time, it evolved into an entrepreneurial podcast.

“This is huge. I fight it every day. I’m fighting it right now, talking to you! I know the success you’ve achieved and what you’re involved in. You’ve done TEDx! But you have to confront it, and you have to overcome it.”

Finally, Larry struggled with having a solid plan.

“I jumped in and bought everything. I have mics I don’t use. I’ve re-done my studio about five times. I literally have gear in boxes still that I have never even opened! You have to know where you’re going,” Larry said.

His advice? Do your due diligence when making a financial investment. Make sure you are putting your money to work for you in the right way.

When I asked Larry what has surprised him the most since starting podcasting, he was very quick to say, “The support of the podcast community.”

Podcasting is such a creative outlet. It allows anyone to jump onto a platform and get his or her message out… or even just his/her topics of interest.

But don’t be fooled—it does take a commitment—not just financially, but emotionally and physically.

So how do you know if podcasting is right for you?

“Everyone needs a podcast… IF you love it!”

Is There Pain in Laughter? The Comic's Depression