Jordan Harbinger is a former Wall Street lawyer turned podcast interviewer. His approachable style and knack for securing high-profile guests has led to his being called “The Larry King of Podcasting.” His podcast, The Jordan Harbinger Show, was voted Apple’s Best of 2018.

“In addition to my podcast, I teach relationship development (or ‘networking,’ but I don’t like that term, because it’s a dirty word!) to everyone from sales teams, Google and Facebook employees, all the way to Secret Service and the CIA.”

Originally from Michigan, Jordan started his first podcast—the original Jordan Harbinger Show (he came back to this show title in 2018)—in 2006 while at University. It was one of the first thousand shows on iTunes and consisted of about five episodes.

He went to law school, started a podcast, did a radio show, left law, went back to the podcast, did the coaching thing, and now, is a full-time podcaster. I wondered what motivated him to walk away from being an attorney and if doing so was a tough decision to make.

“I consider myself a late bloomer when it comes to figuring out what I wanted to do. I worked with… I don’t want to say ‘lazy,’ but inept, maybe… people at various companies prior. They could have done the work, and they just decided not to. I quickly realized I need to do my own thing.

“I ended up leaving law to do the show and a coaching business full time. I grew pretty tired with coaching, though, and ended up having a ‘salty breakup’ with my business partners. Although it was pretty traumatizing at the time, it turned out to be the best thing that ever happened.’”

The stats back it up:

In only a couple years, The Jordan Harbinger Show gets over six million downloads a month! Did Jordan ever worry he would not be able to recreate solo success after essentially ‘leaving the band’? 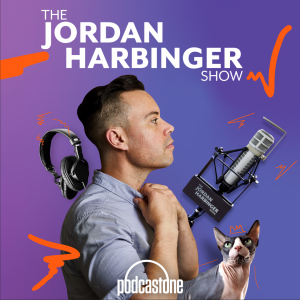 “I didn’t leave the company when I should have, which was years ago. Some of that was the rising of those internal fears: Oh my gosh I have been doing this for 11 years… am I going to be able to start over? It’s going to be so hard to do this! What am I going to do? The band analogy is interesting, as there was another element with that. I didn’t want to be that guy who is like, ‘I’m the lead singer; I can leave. I don’t need you guys.’”

Jordan tried to make it work for a long time, but ultimately, they were not a fit and couldn’t continue working together.

“I felt I had no choice but to leave, and they were like, ‘You can’t leave.’ Which was weird!”

Eventually, they negotiated an amicable split that Jordan reports was not honored, and he was out on his own.

“It was scary, but within eight months, I had a podcast that was bigger and more revenue positive than the one I had with them, so that was a funny victory.”

What Jordan has achieved in the increasingly competitive podcast space is not an easy accomplishment. I had to ask how… what special sauce does Jordan bring to the medium?

“A huge part of it was, when I left my old company, I was able to take pretty much the entire team. A lot of the vendors wouldn’t work with anyone in the company but me, so I just took all of that.”

Jordan doesn’t want to come across as having built this hugely successful podcast in under a year. He had an 11-year ‘foundation’ in podcasting, and the majority of the audience he had built followed him to The Jordan Harbinger Show. It was very tactical; he even hired an SEO team to redirect people who searched for him via the old show to his new show.

“I want all those old links to point to me. The SEO team just emailed all those people, and because I had a good relationship with them, they were like, ‘No problem. Done.’ Then my rankings and everything climb above my old company. It helped that I was a lawyer. The moral of the story is: do not get into litigation with someone who can do most of the heavy lifting himself!”

In my prep for this interview, I noticed that Jordan’s former business partner has taken to using ‘Harbinger’ as his own name since Jordan left. I had to ask if Jordan found that weird, too.

‘I’ll let you draw your own conclusions, but if someone was in a business with you, then took your name and pretended to be related to you… yeah, unusual move. Made me feel a little creepy. There is a movie called Single White Female, and it goes along these lines!’

Sounds like he got out at just the right time.

Hal Elrod: Elevating The Consciousness Of Humanity, One Person, And One Morning, At A Time

Under The Radar: The Daily Mastery Podcast