Imagine being at the top of your career… beating sales records and delivering keynotes… all by 20 years of age.

Now… imagine a split second in time changing everything.

Imagine coming back from the brink of death.

Not once. Not twice. But three times.

When Hal Elrod was hit head-on by a drunk driver at 70 mph, his heart stopped for six minutes. Over the next week, he remained in a coma while undergoing several surgeries to repair severed nerves, 11 broken bones, and a ruptured spleen.

And when he awoke from his coma, doctors told him he would likely never walk again.

But Hal defied the odds. He surprised the medical staff by choosing to accept and embrace his new reality rather than allowing the “unchangeable” to determine his outlook.

And he didn’t just walk again… he ran a 52-mile ultra-marathon.

Today, Hal is a husband, father of two, and accomplished life/success coach, keynote speaker, bestselling author, and Hall of Fame Business Achiever. He is also the host of the highly acclaimed Achieve Your Goals with Hal Elrod podcast, in which he “teach[es] you to achieve your goals and pursue a fulfilling life.”

After the accident, Hal wrote and self-published the book Taking Life Head On! (The Hal Elrod Story): How To Love The Life You Have While You Create The Life of Your Dreams. It was so successful, it launched his new career in coaching and speaking.

On the surface, he appeared to be doing well. The truth, however, is that he was contending with considerable debt.

These financial struggles led to a severe bout with depression. But in an ironic twist, from the depths of darkness emerged perhaps his most celebrated work to date—The Miracle Morning: The Not-So-Obvious Secret Guaranteed to Transform Your Life (Before 8AM). His life and career haven’t been the same since.

The Miracle Morning, a book that, according to Amazon, is “widely regarded as ‘one of the most life changing books ever written,’” has already reached 2.5 million people around the world.

Don’t let that impressive statement deceive you, though. For the first year after its release, Hal said, “I didn’t have an audience. I didn’t have a platform. I was essentially unknown. I was just willing to work really hard. I’ve done hundreds and hundreds of podcast interviews, which is THE number one strategy I used to sell millions of copies. It was conducting podcast interviews and word-of-mouth referrals that really moved the book.”

The launch of The Miracle Morning also prompted Hal to begin his podcast in 2013, following a friend’s suggestion to use it to nurture his rapidly growing email list as the book’s popularity took off.

“The podcast began as a way to give my audience value every week while providing me the opportunity to build a relationship with them,” Hal said. “It’s been seven years now, and 350 episodes later, that’s really where it still is.”

Since the release of The Miracle Morning in 2012, the concept has morphed into a series, been translated into 37 different languages, and sold “incredibly well overseas”—reaching #1 bestseller status in Brazil, Korea, and other countries. And, while it has been traditionally published in every other country, it remains self-published in the States.

“After the book was already selling well and I finally got an agent, we booked meetings with 13 New York publishers. The large majority of them made offers to own the rights to the book. The two biggest we received would have paid me a $250,000 advance. But I turned them down, because I was earning around $50,000 a month from publishing it ourselves. I thought, that would be a great check, but I would regret this decision for the rest of my life. Interestingly, one of the publishing houses who originally offered the $250K, upped their offer to $1.5M a few years later. We turned that down too.”

While there are myriad reasons for the book’s success, Hal points to the fact that their marketing efforts lead to roughly 30,000 people joining his email list and community each month. This gives him an opportunity to build rapport and discuss topics he finds important, as well as issues that he knows his audience—both new and existing members—will be interested in.

“I’ve always been a big goal achiever, and I was interested in learning in that area. I chose that topic [Achieve Your Goals] for my show and the majority of content we create because it’s broad enough to allow me to talk about so many different things—there is limitless opportunity for conversations within this subject matter. And everybody has goals they want to achieve in life, so it’s a way for me to connect with virtually an endless number of people.” 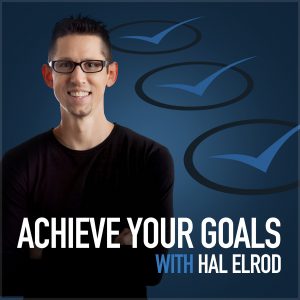 Connect, he does. His Facebook group, The Miracle Morning Community, has over 280,000 members alone; Achieve Your Goals has millions of downloads; and The Miracle Morning has a substantial number of readers, leaving little doubt that Hal began achieving one of his own goals years ago:

To elevate the consciousness of humanity, one person, and one morning, at a time.

“It all begins with our selves.

“If each of us wakes up every day and strives to be our best, then we can go out into the world as the best version of our self and impact every life we touch.”

In November of 2016, almost inconceivably, Hal’s life was impacted once more. He nearly died… again. His kidneys, lungs, and heart were all on the verge of failing. The diagnosis? A very rare and aggressive form of cancer (acute lymphoblastic leukemia).

And just like that, this dad of two young children, ages four and seven, faced a disease that had only a 20 to 30% survival rate.

“It was terrifying,” Hal said. “Without a doubt, it was the most difficult year of my life. It’s such an aggressive cancer that the cells just replicate like crazy. I was on chemo for three-and-a-half years. During the first eight months, I endured 650 hours of chemotherapy.”

Combining this aggressive treatment with holistic practices including acupuncture, ozone sauna, coffee enemas, lymphatic massage, supplements, and juicing, Hal focused on doing everything he could to support his body through the relentless procedures.

Today, Hal is cancer-free and was finally able to end his treatments just a handful of months ago.

The mental and physical trauma, however, he had to contend with during this, and past, recoveries, had taken a deep toll. He developed post-traumatic stress disorder.

“I was in a deep, dark place,” Hal shared. “I was suffering from insomnia to the point of only sleeping two to four hours a night for roughly six months straight. This, combined with the chemo, landed me in a deep depression. So much so, I lost the will to live.

“It didn’t make ‘sense’… my life was great. I didn’t have any reason to be depressed. And I’m in the motivation/personal development industry! I tried every practice I have learned over the years, but nothing worked. I felt like I lost control of everything—like someone else had taken over the controls to my brain. It was wild. It wasn’t until I finally got off of chemo completely that my brain became mine again. I’m happy to report that I’m finally back to normal.”

Despite shouldering more hardships and difficulties in 41 years than most will in a lifetime, Hal’s daughter sums it best: “He’s the most positive person I know.”

Living his values for his children remains a type priority. He offers a refreshing perspective on overcoming adversity.

“No matter what happens to you, you are in control of how you respond. You’re in control of your internal state… your emotional wellbeing. Cancer gave me an opportunity to learn, grow, and become better than I’ve ever been before. That’s the greatest gift our adversities provide.”

Fortunately for us, Hal’s message is about to reach even more people with the upcoming live virtual premier of The Miracle Morning movie on December 12, 2020.

(Tickets are available right now at http://MiracleMorningMovie.com—and your purchase includes a ticket to the world premiere, live Q&A session with Hal, access to the ‘new and improved’ Miracle Morning 30-day online Challenge, a sneak peek at Hal’s rapping skills ☺  and more.)

There is little debate that 2020 has been a difficult year for many. Now is the perfect time to reflect on your life, reset, and find the hidden gems.

For Hal, his reflection includes gratitude for his recovery, a renewed appreciation for life, and a recommitment to his quest to support others to live their best life possible.

“One of my greatest values is serving humanity. If everyone woke up every day and asked, ‘How can I give today? How can I impact as many people as I possibly can in a positive way?’ the world would be a better place.”

And that is a goal we can all aspire to achieve… one morning, and one day, at a time.

Rob Lohman: From Lost to Faithful – Prison to Beyond the Bars