Landon Campbell created a podcast with his best friend and college roommate Micheal Holmes after they graduated and began their careers. It was also at the start of the pandemic.

“We wanted to help people… to interview the most influential people to talk about one thing: their 20s. It’s a defining decade where they made a lot of mistakes, or had a lot of failure, or a lot of obstacles to overcome. We really believe that in order to be successful, you need to see success. Those are the stories we wanted to highlight.”

During this time, they saw a lot of their peers facing challenges. They noticed a general sadness in people not knowing what to do. Both Micheal and Landon had signed post-graduate offers with companies, so they did not have the same worries as many they knew.

So, they chose to help by podcasting.

Their original idea for the podcast came around March of 2020, and the first episode was released in June. From day one, they were determined to run it like a business while being very intentional with their mission.

InTheir20s is broad while being very specific to successful people’s experiences during that period of their life.

Neither Micheal nor Landon knew the gravity of the challenge that was about to hit them, in their twenties.

“Micheal unfortunately passed away in April 2021 from a short battle with brain cancer. He was a few months younger than me, and that’s been a really challenging thing to work through. I’m focused on keeping this podcast going—we started it from nothing, and I want to preserve his legacy, his memory. This was both of ours. While I don’t have him here every day anymore, he is still a co-founder. He is still a co-host.”

This tragedy was very out of the blue; Micheal passed away just one month after everyone, including himself, found out about the diagnosis. They decided to go public with the information, and through their local and podcast communities, ended up raising $20,000 in a very short amount of time for Micheal. 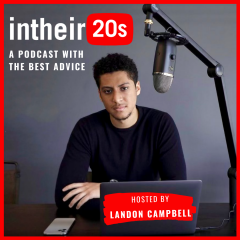 “Through all the sadness, it has been magical to see all the impact that Micheal had in people’s lives. People would tune in to this show to hear his voice every single week. He is in his 20s, and even though he is not interviewing anymore, his energy is there, and his enthusiasm is there.”

Micheal’s presence can still be seen on their website. In fact, it is not clear that he is gone when you initially come across InTheir20s online, so the news can be shocking. But that makes sense, when, according to Landon, he remains part of the current team.

And Landon continues to interview “the most influential people in the world to share the best advice for 20-somethings.”

In the spirit of sharing advice, Landon has two pieces he received early on that helped InTheir20s get a strong start:

“Number one—just start. During our preparation period, we would constantly question when to start. Just start. you are not going to have all the answers first. Number two, after you start releasing episodes, don’t focus so much on monetization. Focus on building the brand and the community.”

For Landon and Micheal, that meant reaching out to people in their community, which, thanks to Landon’s 10 internships in college, was vast. His adult identity and network were created through these internships, during which he worked with great people and companies doing amazing things. Landon was impacted by all the advice he received, and he knew they were the people they wanted to hit up first for interviews.

“We started with people who were influential to me—maybe not recognized world leaders, but important to me. Now, we are going after some big names.”

When it comes to monetization, things look very different now than they did when Michael and Landon began trying to turn their show into a business.

“We were calling different businesses and offering sponsorship opportunities. I remember there was a lot of frustration there. People were not interested, as we didn’t have much to show for it.”

They went back and focused on the content, and now, they have a partnership with Upkeep to train and run internships via their podcast. This is not something they could have planned out before beginning their podcast. They also now have interns who help them share their media out onto many social platforms each week to continue their growth.

“We have had some amazing guests now. Steve Wozniak, the co-founder of Apple, is our 50th episode in just over a year.”

Landon focuses mainly on Spotify, as they use Anchor to create their podcast, which is owned by Spotify.

“We love Spotify. We love the direction the company is going when it comes to podcasting and audio, from the quality to the acquisitions they have made. We are proud to be a Spotify podcast.”

So what is next for InTheir20s?

“We are developing a live show on Fireside, which is co-founded by Marc Cuban. We like the direction they are focused on when it comes to podcasting and content creators. So, we are launching a weekly live show separate from the podcast, which is the InTheir20s Live show. This is where we’ll be speaking to people who are currently in their 20s about key takeaways they have learned.”

Landon has already learned a lot in the last year during his 20s, and he and Micheal created a podcast to help others in theirs. In doing so, they also created a legacy that keeps their joint impact alive.

Tuckered Out With Ami Thakkar

Sober Up To Podcasts

Tuckered Out With Ami Thakkar