Ami Thakkar’s journey to podcasting was one of finding her true North—her purpose in life.

Ami’s parents immigrated from Bombay to the U.S. in the 1960s making Ami first generation. She grew up in Houston, where she was immersed in the South Asian community and culture. Her’s was a traditional South Asian household, and going to graduate college and having a stable career was the expectation. Ami says that while her parents raised her with traditional values and culture, “They also understood the importance of integrating into the American life, because at the end of the day, we were American kids with an Indian background.”

Ami’s brother’s path was clear—he became a pediatrician. Ami enjoyed writing and wanted to study journalism, yet in order to please her parents, she graduated with a degree in economics instead and landed a corporate job with Enron. Looking back, Ami shares, “If I could rewind, I would definitely go to journalism school. I just didn’t tune into myself enough to understand what I wanted to do.”

Because Ami was bilingual, after she left her job at Enron, she moved to Bombay and worked as a backup dancer for a singer and as a DJ radio personality. After a year, she moved to Chicago to study law. Next, Ami moved to New York City to practice law, and three years later, she met her husband. Shortly after getting married, they moved to Delhi before packing up again and moving to Dubai. From Dubai, they moved to Dallas, then Arkansas, and finally, to her current home in Connecticut.

“I have now lived in nine cities and three countries. After I got married, I retired as a lawyer. During our moves, I tried several career paths, including working with nonprofits and startups and freelance writing for magazines. I felt like I was always trying to figure out my calling. What did I really want to do? What was my purpose? And while starting over was exciting because I got to explore new stuff, I never knew what I wanted to stick with.”

Ami had been listening to podcasts and became obsessed with serial podcasts, including true crime. A few months after her second daughter Kyla was born, Ami experienced a dark night of the soul:

“I lost it,” she recalls. “I knew I needed to do something for myself. I needed to do something that I could bring with me anywhere we moved, and that I could do from home, so I could be with my daughters. I knew I loved storytelling and that I was a connector. I also knew that I loved working in radio. With all of that combined, I decided to start my podcast. It launched in December 2017, and it was very, very basic. I did the graphics by myself! 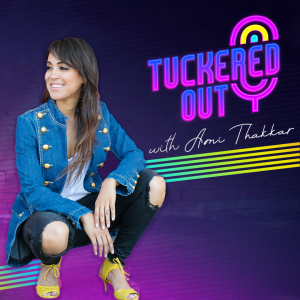 “I chose the name ‘Tuckered Out’ for a couple reasons: first, because I was literally tuckered out from the moves and from trying to understand what my purpose was. I had tried so many different things, and I was fatigued. I was also tuckered out from being a mother of two young children.

“Second, I’ve always been called ‘Tucker,’ because that’s my last name. I thought it was a cute play on words: ‘Tuckered Out With Ami Thakkar.’ Then I thought, why would anyone want to listen to me? What do I have to offer? What do I have that’s unique? What is my experience? And I realized that the South Asian community was one thing that I’m passionate about. I had always been curious about people’s professional journeys, and that’s when I decided I could combine my passion and curiosity! I had a great network, and I knew a lot of South Asians who were doing great things, so I could have conversations with my own friends, and we could share our experiences and stories as first-generation South Asians in America.”

After her tenth episode, Ami’s family moved from Dallas to Arkansas, and Ami remembers thinking, “‘Okay, that was fun for 20 episodes, but nothing’s going to happen with this. Whatever. It’s a hobby. I have to figure out what my true calling is…’ Again, I was on that path. So I put a pause on the podcast. Fast forward to 2020, and we move to Connecticut during the pandemic. I realized that I didn’t really give podcasting a chance. I also realized how much I enjoyed podcasting. I was ready to really focus on my podcast and me. I rebranded with a professionally designed new logo. We’ve got a new website, and I relaunched the podcast. And now I’m full force—interviewing South Asian prominent voices, experts, and trailblazers who are leaders in their industries and doing unique and cool things. And it’s been very fun.”

When not recording her podcast, Ami spends time on Fireside. One of the co-founders of Fireside, Falon Fatemi, reached out to Ami to become one of their Firestarters, and Ami jumped on the opportunity. She says, “It’s still in beta testing. It’s kind of a next-generation podcasting platform. I really love the way they built Fireside and geared the app toward podcasters.”

Last month, Ami was a Podcast Movement panel speaker on the subject of “Mommy’s in Podcasting.” She also met Mark Cuban, the other co-founder of Fireside!

Ami’s dream guests for her podcast are comedian Lilly Singh, Indra Nooyi (former CEO of PepsiCo), and Prime Minister Narendra Modi of India. Ami is also focusing on building a global network of South Asians while uplifting their voices around the world.

Ami shares these words of wisdom from her travels around the world in search of her voice: “The one word that always comes to me is ‘impact.’ I want to have some kind of impact. Now, what does that mean? I don’t know yet. But I know there’s always room for your voice. I think all of us are tuckered out at some point, and it may be a constant thing for some—especially in adults. I guess the most important life lesson I’ve learned when I look back at my twists and turns is that I followed the energy. I followed my energy, and whenever it felt right, it felt good. I followed the right vibe… the right energy. So, follow yours.”