According to Dictionary.com, a “disruptor” is “someone or something that interrupts an event, activity, or process by causing a disturbance or problem.” Every disruptor I have ever met has a penchant—well, really a driving need—for constant learning and questioning. With an uncanny ability to intently focus when it matters, disruptors also see a need for change and seek a part to play in creating that change. They do not choose to be bystanders.

Matt Ward, the host of the chart-topping podcast, The Disruptors, has a bit different definition: “Someone who challenges the status quo and is willing to have the ugly conversations. Disruptors are willing to do what most people don’t think can or should be done.”

He hosts the show while writing dystopian fiction, running a business, helping others grow their businesses, and raising a child with his beloved wife. Doing just one of those roles is not for the faint of heart. All of them together, along with a history as a serial entrepreneur who wants to make a difference in the world, leads me to classify Matt as a disruptor himself.

And what better time to interview The Disruptor himself than during the COVID-19 quarantines and work-from-home orders that were in full swing when Matt and I spoke? After all, this pandemic is, and has been, the biggest disruption to life and business as we know it that has ever existed in most of our current (read: U.S.) realities.

In reading the description of Matt’s podcast, I expected to interview an optimist who sees possibility around every corner: “To not only predict the future, but to create it. We believe we engineer the future we envision, and by working together as one, we can build a better world.” Imagine my surprise when Matt quickly and readily admitted that he is, “incredibly great at being cynical… good at finding problems with things.” 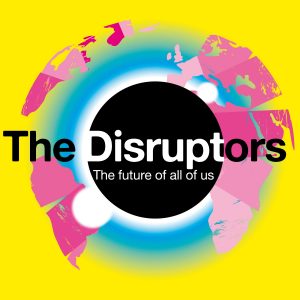 By the end of our conversation, I had a new respect for self-proclaimed cynics who accept their nature and use their power for good.

So, how did this cynic and writer of dystopian science fiction start a podcast with the mission he has? Believe it or not, it was because he realized that, “If we assume the worst, it’s easier to scare people straight before we achieve the worst.”

A sampling of recent podcast episodes highlights the top issues facing the world today, including late-stage capitalism, electric cars, AI, healthcare after COVID-19, Internet censorship, and a few that might surprise you. (Psychedelics, anyone?) What all the episodes have in common is a frank conversation about current and future world needs and the people who have made it their mission to improve the world one idea at a time. Matt’s guest list is a “who’s who” of his definition of a disruptor.

Each guest brings a stimulating perspective on issues affecting the world and their take on related solutions. These interviews generate ideas for Matt’s books, including two of his most recent: Death Donor and Cynetic Wolf. Matt’s writing “weaves the big picture ideas from podcast guests with how humanity is diverging quickly when it comes to genetic engineering.” Lately, it seems as though the world is beginning to live Matt’s books, and it concerns him.

Luckily, though, Matt’s worldview, despite his cynicism, gives him hope that humanity can get out of the hole we have gotten ourselves into via creative thinking and a lot more disruption in the way we move forward. That worldview has been cultivated by Matt’s life experiences, including traveling the world with his wife and the recent welcoming of his newborn son. He is currently learning German, amidst his quest for continued learning, because he and his wife are thinking about moving back to her home country of Switzerland.

When I asked Matt if he had a last thought he would like to leave the readers of Podcast Magazine with, he said, “Like anything you build, it doesn’t really get built until it gets broken down first. So, go disrupt something, and let’s build a better world together.”

The world had been disrupted on many levels even before the pandemic, and the disruption is now increasing at a faster rate as shutdowns and re-openings continue. The ways we used to do business may not be able to resume when the world reopens. How we live our lives is changing as the planet lets us know that we have changed it, and this might be just the tip of the iceberg.

The world as we know it is being broken down.

If you believe what Matt and his fellow authors of dystopian fiction have written, things will just get more divisive and worse from here.

But Matt, and many other podcasters, also believe that we can still create a future where we all win.

So, are you in? Are you ready to disrupt to make the world a better place? Give us a shout on social media using the #PodcastMag tag, and let us know how you are changing the world for the better.

A Rebel with a Cause