What does a man who has spent his life helping companies partner with one another do when he gets in front of a microphone?

He starts a podcast about partnerships.

Vince Menzione is the founder and host of the Tech News podcast, Ultimate Guide to Partnering. With over 157 episodes under his belt, Vince’s goal is to help the tech industry become more cohesive as corporations recognize that building a partnership with resellers is a main leg for business success.

Early in his career, when he was “carrying a bag and doing sales,” he quickly found that partnerships were “a key accelerant” to his success. Ultimately, he wound up at Microsoft as a general manger for U.S. Public Sector Partner Strategy. He had found his calling—helping create partnerships for success.

Vince spent a good portion of his career in this position, and it inspired him to write a manifesto explaining why partnering is critical to business success. You can find it on his LinkedIn profile, and it is worth the read.

What is it about partnering that gets Vince excited? Everything. 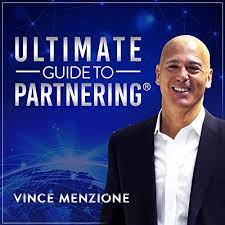 His podcast is not just about partnerships, though. It is also about lifting other voices in the technology community. He feels he has an “obligation to do so, for all the opportunities” he has been given. He doesn’t want it to be just all “white male voices,” either, which is more common in the tech sector. He makes a point of finding diversified voices who share their journeys to help others move up and grow.

He aims to have authentic conversations that help people create partnerships in their businesses and in their lives. On and off the air, Vince acts as a mentor to the up-and-coming just starting out, and to those who have already been in the industry for a while, but want to learn and grow. As a result, the Ultimate Guide to Partnering is morphing into a conversation about, and examples of, successful leadership.

Recently, Vince saw a post about his show on social media by a brand-new listener. That listener loved his show so much, he took six pages of notes from a single episode, which he then photographed and posted. It’s moments like that that keep Vince going.

Growing your audience is not easy, if you are not a celebrity or find some way to go viral. Vince works hard to get the word out, but even in an industry where he is well-known, it is still a challenge.

He also works hard on his show, devoting an average of about twenty hours a week. That includes research, hosting the actual show, and then finishing all the details to post and promote the episode. All this while working with his consulting clients.

At one point, he realized that others were trying to copy his work. To prevent that from happening in the future, he trademarked his show. Not many podcasters go to that level to protect their intellectual property, but Vince believes deeply in what he does and doesn’t want someone else to try and capitalize on his hard work without the same level of integrity he puts into it.

Starting the podcast changed Vince’s trajectory for his career. He was thinking about going back to work for another tech giant until he spoke at a conference. He kept getting stopped in the hallways by people commenting on his show, and they kept handing him cards saying, “Can you help us with partnerships?”

That’s when he realized he had other choices. He wanted to help others build their businesses with the “secret sauce” he had learned—partnerships. So, he took one short foray back into the corporate world and is the first to admit he was “lured by the pressure of the big paycheck and a chance to change their culture.” Due to his contract, he stopped producing the show. Otherwise, he would have had to comply with the constraints they would place on his content and branding. Rather than compromise his content, he paused. He left that position during COVID and hasn’t looked back once.

Leaving was the catalyst to write his manifesto on the Seven Principles of Partnerships. Returning to his show, it is now bigger than ever, and his consulting practice is thriving once again. He has landed several sponsorships for the Ultimate Guide to Partnering, as well, including one from Athletic Greens, which is very special to him.

Early on in life, he decided he needed to make his health a priority. He lost 65 pounds and appeared on TV multiple times to talk about mindset, health, and the techniques he learned to help him achieve his health and business goals. One of the products he believes helps him to continue his quest to optimal health is none other than Athletic Greens. His partnership with them enables him to help others establish symbiotic partnerships, too.

After all, as Vince loves to say…

“What use is a partnership, if it doesn’t benefit both sides?”
Tweet This