Leah Lamarr is an actress, stand-up comedian, writer, and podcaster born and raised in NYC. She has appeared on The Late Late Show with James Corden (CBS), in a music video alongside Charlie Puth, Zack Braff, McLovin, Josh Peck, and of course, James Corden, as well as in the web television series Jean-Claude Van Johnson (Amazon), Code Black (CBS), How to Get Away with Murder (ABC), Not Safe with Nikki Glaser (Comedy Central), and Laff Tracks (HBOMax/TruTV).

She also writes, produces, directs, edits, and stars in her web series, The Real Witches of West Hollywood, which premiered at The TCL Chinese Theatre at Dances With Films last June and is currently making the festival rounds. It has not only won LA Top Shorts, but was recognized at the LA Film Awards and Hollywood Art & Movie Awards in 2019.

Pre-pandemic, Leah hosted three episodes of What the Fashion on the E! Network and starred in a few episodes of an international shoot-at-home series called Interconnected. It featured Emma Thompson (Sense and Sensibility), Drea de Matteo (The Sopranos), Adam Shapiro (The Affair), Katie Lowes (Scandal), and Chris Redd (SNL). She also joined Melissa Rivers as her guest on Group Text with Melissa Rivers.

I could go on and on—this extensive list includes only about a quarter of her credits. She’s definitely a busy girl. But since this is Podcast Magazine®, let’s talk about her podcast.

Falling In Love with Leah Lamarr is a somewhat misleading title. I mean, she isn’t really asking you to fall in love with her. (Or is she? She is pretty adorable, so it’s not out of the realm of possibility!) But really, this show is actually an opportunity for Leah’s two hand-selected guests to fall in love with each other.

That’s right—Leah sets up her single friends on a date, and that date takes place on the podcast. The fun is in seeing if they fall in love (and yes, it has happened!).

Leah is very thorough in her process. She wants to know very specific information about each of her guests before she ever plays matchmaker, so she sends them pre-show questions.

“I find out what they’re doing in their regular life, what their family history is like, if their parents are divorced, if they’re together, if they’ve had unruly breakups, if they’ve had their heart broken, if they’re interested in monogamy, if they’ve been cheated… there’s just a variety of topics,” Leah said.

From there, everyone gets together (pre-pandemic, this would be in person in the Comedy Store basement), and it’s time for the 36 Questions That Lead to Love, by psychologist Arthur Aaron. 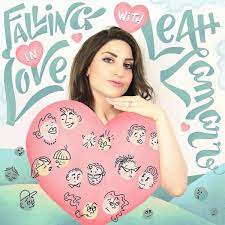 “At the end of the 36 questions portion, they’re supposed to stare into each other’s eyes for four minutes of uninterrupted eye contact. And I actually have them do the full four minutes. They sit right next to each other, and there is zero verbal communication. I have had people cry. I’ve watched people burst into manic hysteria. I have people laugh maniacally. It’s very uncomfortable for people to hold eye contact for that long in this day and age, especially with a stranger.”

After the four minutes of uninterrupted eye contact, Leah leaves the room.

“Then, they go on a date without me. Of course, I listen in, so I know what’s going on and can make my predictions. I watch through a glass window and can hear them—much like being interrogated at a police station,” Leah joked.
“It really is a fun show! And it’s actually helped me a lot in my dating life, because I’m able to pick up on nonverbal and verbal cues much faster now when I go on dates with people. I’m still looking to find a husband myself, but here we are. So, I’m helping other people find love, which is a great joy of mine.“

To be on a recorded first date with an “invisible” moderator is a wild premise. Are there really successes? Have people actually fallen in love? I had to ask…

“I’ve had a bunch of successes! None of them have lasted fully, but one lasted an entire year, which in LA, is basically a marriage!
“When the pandemic started, I was doing podcasts via zoom, which was fun. However, I was setting up people who were long distance because of COVID. I also became very uncomfortable with the idea of creating a space where people could meet up for the same reason. So then, it became a sort of lose-lose situation for a lot of people in the world of dating. So I decided to take a beat on the podcast, until it felt more appropriate to start setting people up again. So that’s where I currently am with it.”

That’s not to say Leah decided to sit back and watch TV or bake brownies. She stayed in action, becoming an executive producer for Interconnected, which is currently in pre-production and soon to be released.

“We created an anthology series about the pandemic, but not about the pandemic. Every episode is standalone and different. One is straight-up comedy while another is horror—a woman gets possessed by an old Hollywood actress who is haunting her house and takes over her body. Another is around a couple who was quarantined together for so long, they got sick of each other and finally filed for divorce. It all ties around the premise of the pandemic, and we actually connect them to one another with a little hand baton toss. Essentially, a character who’s a lead in one episode may appear as a Tinder match in another episode to show that we are all really interconnected.

“And it’s so exciting, because we’re all over the world! We’re on every continent besides Australia and Antarctica. We have talent from Beijing, India, Berlin, Paris, the UK, Brazil, 10 cities in the United States, and the list goes on and on. Italy, Barcelona, just everywhere. I’m very proud of our project.”

Having collaborated with up-and-coming actors to Oscar winners during the production of Interconnected, Leah feels very fortunate. Everyone worked to create this powerful piece of during unprecedented times—including by shooting footage on iPhones from the actors’ individual homes and taking footage from Zoom calls.

“I have never been prouder of anything I’ve ever worked on. I’m so in love with this project. I think it shows how connected everyone really is, and how hard this time in our lives is on all of us.”

Despite the pandemic causing Leah to take a pause on Falling in Love with Leah Lamar, she is far from giving up on her show; it’s simply morphing into something new and different.

“I’ll be interviewing relationship experts, love and dating coaches, and marriage counselors, as well as big comics. We’ll be discussing the road to marriage, what a lasting marriage looks like, monogamy, polygamy, sexuality… just every hot topic you can imagine. I feel that’ll be a fun approach until life starts to fall back in place again.,” Leah said.