Dedicated to the many unsung off-stage heroes, Shawn is the perfect one to do it.

Shawn started his career in the world of entertainment by attending Emerson College for theater acting and directing. He produced some original plays there, including a one-man show. Then, he moved to San Francisco and opened his own theater.

After being cast in a few plays professionally, including one in Boston, he worked on some short and feature films (which he credits for teaching him a lot about the inner workings of the industry) before following his dreams to New York, where he ended up securing work as a crew member in the Blue Man Group.

“I wasn’t a Blue Man, but as a lighting designer, I was literally in the show every night for two-and-a-half years, whipping the paper around at the end. And that was pretty cool.”

Eager to advance his career, he joined a Film Collective, and made his first short film.

“It cost me $10,000, and we shot it on 16mm. Some film festivals showed it,” he shared. But it wasn’t long before he was ready for his next adventure—which he refers to as “a really crazy place”… an internet television station.

“This was in 2000,” Shawn said. “They were doing these little Internet TV shows that only broadcast on the internet. There were 12 channels and something like 1620 shows. They were burning through $250,000 in venture capital to produce these shows every month. They featured huge names like Eminem and Jay-Z. That was an exciting time. I’ve always worked at companies doing really creative stuff.”

During that time, and for more than 25 years after, Shawn worked as a video editor for short and feature films with some really incredible networks: Cartoon Network, TCM, Turner Classic Movies, Turner Sports, NBA TV, TNT, TBS, MLB Playoffs, and NBA Playoffs. 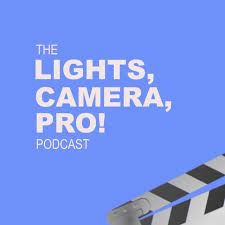 To say he likes to stay busy is an understatement… which might make you wonder how he managed to start a podcast, too.

When the COVID-19 pandemic hit, he was working freelance with a company that had no choice but to furlough their employees one week per month and cut all their freelance talent. While he still had other freelance work, it wasn’t 40 hours a week.

“So I said to myself, ‘Now is the time! I’m just going to do it. I’m going to start this podcast, and just see what happens.’”

Realizing that he had tons of opportunity to book guests during a lockdown situation while everyone was home, he seized the opportunity and began recording… every single day.

“I knew people would be so busy when this thing is over that it would be harder to find availability.”

One interview led to another, and then another, and with all of Shawn’s experience and connections in the industry, it just snowballed.

“I kind of relate to everybody,” Shawn said. “A lot of the people I’ve had on the Lights, Camera, Pro! Podcast were tape ops or tape assists when I first got to Turner 14 years ago, and they’ve come so far. One just finished his first feature!”

In a very small window of time, Shawn had published 35 audio episodes. Since then, he’s added video to the mix, too.

“I just did a show today, actually,” he said. “The guy I interviewed now has his first independent feature, a horror-comedy movie that’s on Amazon. We showed clips from it and revealed behind-the-scenes footage, which excites me even more than the audio podcast!”

Speaking to that excitement, Shawn loves this new outlet he’s found for his creative energy. “I would rather work on podcasts than anything else. I’ve got 25 posted on Apple podcasts, and about 55 recorded and in the can, because I just keep doing two to three a week. I love talking to amazing people and hearing their stories. It is all about the content and the connections. I let the chips fall where they may.”

If you’ve been thinking of starting a podcast, too, Shawn has some excellent advice.

“I’ve found that releasing more than one show a week helps me stay on the apple charts and get more downloads,” he offered.

What he’s doing is clearly working, because his show is gaining attention. Shawn is currently in talks with a few different podcast networks, and he’s definitely increasing his reach.

“I’d love to get an interview on a local television station. That almost guarantees huge jumps in downloads and followers. A magazine article is even better,” Shawn said.

While he is a one-man show, per se, Shawn is quick to acknowledge the help and support he gets from his girlfriend Nicole and his three kids.

“My son did a little bit of research on Twitch, and my daughters researched Snapchat and Tiktok to see if I should be on those platforms. And Nicole reminds me of the good things that can come out of something as terrible as this Pandemic. This podcast never would have happened without it.”

As things start to open up, Shawn is looking forward to the future—and to diving even deeper into the world of podcasting.

It’s clearly close to his heart, as he got a bit emotional when I asked him what it means to him to provide people a platform to tell their stories.

“It’s all about how they did it,” he reflected. “How they got their first job, how they worked their way up to working on national commercials, TV shows, and films. We get to provide a sort of blueprint, really, to those who are just starting out. We’ve been there, and this is our way of helping them find that job, or land that gig. It’s not easy, and a resume just isn’t going to cut it, anymore. You’ve got to do it all through people—through connections. My hope is that the Lights, Camera, Pro! Podcast will make the whole process easier for the ones following in our footsteps.”

There is no doubt that Shawn has set the bar high in a short amount of time, and that he, too, is experiencing the beautiful power of podcasting.

The Making of a MASTERPIECE...

When the Wind Shows Up