Three fun-loving friends who share the common bond of being industry professionals created the Martini Giant podcast for those who love movies as much as they do.

Chris Nichols has worked with Dan Thron and Erick Schiele on both big-budget and indie projects. He has been in the visual effects industry for 20 years and has a total of 30 years of computer graphics experience.

Erick, too, has spent close to 30 years in the visual graphics field. He describes himself as “the oddball,” and he’s one of Chris’s oldest friends.

Chris added, “He’s our crazy artist. We’re convinced he has ADD, but more importantly, he has a wealth of knowledge about movies and rock and roll, and he doesn’t candy-coat anything.”

The graphics for the Martini Giant podcast are Erick’s domain.

“For every episode, Erick takes stills from the movie we are discussing and replaces the actors’ faces with our faces, to poke fun at how into movies we are,” Chris explained. “He comes up with hundreds of designs per day. He’s the most prolific artist I know.”

Erick shared a bit of his backstory. “I’m a painter, and I got into set design in New York. Then I moved to LA, and I started designing titles for films and got into 3D. Like Dan, I write and direct, but my day job is graphics.”

Dan has been in the visual effects world for 15 years. “I worked with video games before that, and I also do illustration, matte painting, and concept design.”

Chris explained how he and Daniel met. “We worked together at Digital Domain, a visual effects company. We actually later interviewed Scott Ross, who co-founded the company with James Cameron and Stan Winston.

“We used to work very long hours, so we would take a coffee break in the evening, go have a martini together, and talk about our favorite subject—movies. Dan’s a walking IMDb. He also has bushy hair and is six-foot-three. He used to hold the little martini glasses, and apparently some of the other patrons of the bar nicknamed him ‘The Martini Giant,’ because that’s what he looked like. We thought it was hilarious, and a friend registered the domain martinigiant.com. We didn’t know what we were going to do with it until we decided to make a podcast and had no name for it. My friend said, ‘You know, we still have martinigiant.com.’ And that’s how we chose the name.”

This podcast is actually a spin-off of Chris’s CG Garage show, which he started almost eight years ago.

Chris said, “CG Garage is a much more technical podcast about computer graphics, but every now and then, I wanted to break it up with something a little different. I used to invite Daniel onto the show to talk about Star Wars or something. Those episodes became pretty popular, and people started asking when Dan was coming back. And then I decided to get Erick in here, too. After he joined us, we decided to turn our conversations into a separate podcast. That was about four years ago. 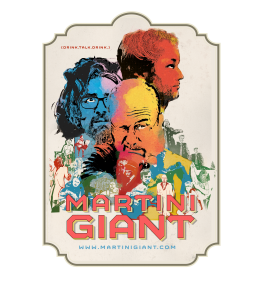 “Dan, Erick, and I would often sit around and talk about movies while having a cocktail. The aim of the podcast is to have people feel like they’re in the room with us, having a drink and talking about movies.”

There’s so much to talk about that each biweekly episode of Martini Giant is around three hours in length.

“There’s no way we’re going to talk about two movies and compare them in under three hours,” Chris pointed out.

Over the two-week period between episodes, listeners have time to take it all in. “They can listen to 20 minutes, and then another 20 minutes at some other time, and so on,” Chris explained.

“The interesting thing about our audience is that I kept thinking we can’t make the episodes three hours long or talk over each other. It turns out, I was completely wrong. Our audience likes all of that. It was surprising. They feel like they’re hanging out with us. Best of all, our audience has a super-deep love of movies, and it’s been underserved by other podcasts.”

With their different personalities and perspectives, it’s almost inevitable that these co-hosts sometimes speak at the same time and have entertaining debates.

“Dan has a lot of deep knowledge about film and can analyze anything. He’s still trying to convince us that Titanic is one of the greatest films ever. Erick has an amazing understanding of cultural references and a passion for music, and how he associates music with movies is really impressive,” Chris summed it up.

Much of the time, the trio discusses and compares two movies that seem to have nothing in common.

“We tend to bring an interesting twist to the juxtaposition of two movies, like how music is a form of language in two seemingly different films.

“Every Saturday at 3:00 p.m. Pacific time, movie lovers can join us on Twitch. Just go to twitch.tv/martini_giant, and you can be part of the audience and the show. In the weeks between episodes, we host fun watch parties.”

100 episodes in, the co-hosts have set their sights on creating a short. “We feel that Martini Giant can go beyond the podcast,” they said.

With the trio’s “perfect chemistry,” as noted in a listener’s review, chances are that the short, like the podcast, will be a hit.

The Top 8 Must-Listen Podcasts For Screenwriters