Five years ago, Aaron Mahnke spent his evenings writing supernatural thriller novels with a splash of folklore (and a lowball glass of bourbon).

With the intention of creating a free giveaway that would entice people to buy more of his books, Mahnke created a PDF document titled “My Five Favorite New England Myths.” Just as he was about to export it, he suddenly felt it wasn’t quite right—reading a 10,000-word document would be frustrating on a phone screen. Instead, he thought audio versions of the historical stories would be more appealing. After running the idea by a friend, he was soon convinced to create a podcast.

“In about 48 hours, I named it. I branded it, I built a website, and I learned how to handle podcast hosting and distribution. And then, on March 18th of 2015, I clicked ‘publish.’ My life has never been the same.”

Lore started as a slow burn. Nine people downloaded his show (himself included, to test whether it all worked or not), and he was thrilled!

Soon, word spread, and Lore started growing… but it exploded once it landed in iTune’s New and Noteworthy section. By month five, Mahnke had TV offers in his email inbox, and book deals were beginning to surface.

Lore has since achieved 250 million downloads over the past five years, and has transformed into an Amazon Prime TV show and a book series. 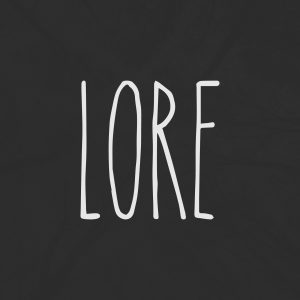 “Mark Maron and Jonathan Van Ness were in my category. Like, how in the world could I come in and go up against those people? I went in with really low expectations, but both Nora and I ended up winning in our categories. We felt like a couple of dummies at the end of the night!”

Under the iHeartRadio podcasting wing, Mahnke and his team have launched three new shows—Noble Blood (hosted by Dana Schwartz), Unobscured, and Cabinet of Curiosities—all of which have been number one on Apple’s podcast charts.

He has also launched a podcast production company called Grim and Mild, under which all of his iHeartRadio shows will be crafted. The network will serve as a catalogue of additional podcasts for Lore fans and more.

“I have insanely talented people around me to help me do everything I dream up. Playing in the sandbox of history is a really great place to be,” Mahnke shared.

The universe pulled him toward that sandbox in fifth grade, when he convinced his parents to purchase a book of mysterious historical events from a Scholastic book catalogue.

“The stories inside changed my life. At that moment, I knew I wanted to tell stories like that to people.”

The stars also aligned when he discovered the radio program called The Rest is History with Paul Harvey. Harvey’s drop-the-mic endings inspired Mahnke to be a compelling storyteller.

Soaking in all kinds of unsolved mysteries, Mahnke entered college during the start of The X-Files.

“It was fun growing up like that. I feel like—especially as a kid—you kind of have that curiosity about things you’re maybe not meant to know about yet,” he said.

Mahnke loves that he gets to celebrate “the outsiders” in history, especially since he began podcasting feeling like an outsider himself.

“History is full of stories we don’t teach in school—stories we don’t talk about all the time. Mostly because we don’t have a tidy answer. The stories don’t have a neat-and-clean explanation. They don’t necessarily have a date, place, and significant importance attached to them. With folklore, there’s a focus on preserving cultural traditions and recording significant events and people. There’s also another area of folklore that’s purely about managing ourselves in society,” Mahnke explained.

When it comes to offering podcasting advice, Mahnke likens it to flying a kite. There’s only so much you can control. You get to build a beautiful kite, and you can run around the park… but you can’t control the wind.

Prepare for when the wind shows up.