In 1977, NASA created “Golden Records”: manufactured phonograph records containing audio and images from Earth. They sent such records up with each Voyager (1 and 2) spacecraft.

You may be wondering, what on Earth does this scientific space stuff have to do with a comedy podcast? Well, you are about to find out.

Keeping Records was created and is hosted by Caleb Hearon and his roommate and collaborator, Shelby Wolstein. Both are queer comedians who got their start in the Chicago comedy scene.

Shelby and Caleb became really interested and fascinated by the Golden Records, and both thought they were a bit outdated as of 2021.

So, they decided to launch a podcast to “ask their cool guests”—and yes, being cool is a requirement to be on the show—what they consider a good representation of life on planet Earth and to discuss the actual images and sounds that are included in the Golden Records produced 44 years ago… which tell a story all their own. 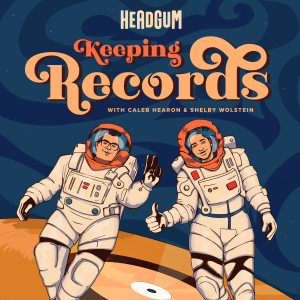 With their idea in mind, they also relocated to LA a year ago, during the pandemic.

While preparing to pitch the show to various entities, Shelby and Caleb were determined to do the show whether they were picked up by a network or not.

“We were basically like, ‘Okay, if we find someone really cool who likes and respects our idea and wants to actually invest in it, then great. But if we don’t, we’ll just do it ourselves,’” Shelby shared.

Then, something remarkable happened:

Geoffrey James, host of Review Revue on the Headgum podcast network, tagged Shelby and Caleb in a couple of posts on Twitter. He didn’t even know they had an idea for a show— he just liked their vibe and saw their potential as hosts of a podcast.

With the well-oiled machine that is Headgum behind them, Keeping Records is a fantastic combination of science, history, great friends, and a few F-bombs thrown in along the way.

Of course, it’s about more than simple fun, too.

“The idea behind the original Golden Records is that they will exist long after Earth ceases to,” Shelby said. “That’s pretty crazy. I don’t know if it’s actually important, because at that point, we’re gone anyhow. But it does make you think about humanity ceasing to exist. And then it’s like, ‘Wow… well, then what the f*ck are we doing?’ Knowing there’s some sort of record that exists beyond us makes it a little bit less untethered. It’s not so much important as much as it is beautiful, to me.”

Caleb credits their partnership with Headgum for the show’s “incredible audio engineering,” courtesy of Mike Comite, which does indeed translate to easy listening.

“Our audio producer, Mike Comite, is truly a genius,” Caleb said. “Anyone who listens to the podcast will comment that the sound editing is incredible. We’re 20-something episodes in, and it’s just this really cool thing that is beautifully edited. And it’s all thanks to Mike. It’s funny, because we praise him on the show all the time, but he always cuts it out.”

Caleb and Shelby’s favorite episode so far is the same: Beth Stelling.

“Everybody who’s been on so far has been a friend of ours, and each is unique and different. Beth Stelling’s episode was one of the funniest. She was getting food delivered to her house before the recording, but it didn’t come on time and was ultimately delivered to the wrong place. So she’s interacting with the Postmates’ customer service at one point during the recording. And I mean, we just put it all in.

“So many podcasts are buttoned-up, straightforward conversation. We were laughing our *sses off at the chaos of the whole thing and decided to put it out in full anyway. Beth was okay with that. I think we have tried since then to lean into chaos in our episodes more, because that episode was so fun. It really changed the format of what I thought podcasting was supposed to be, which is like this clean, nice interview,” Caleb said.

Listen in to Keeping Records. You will not only laugh with Caleb and Shelby (they really are a treat—quick-witted and fun, and their deep friendship really shines through!), but you will definitely learn something, too. That is always a great combination—as is the pairing of these co-hosts.

The Around the House® Home Improvement Podcast